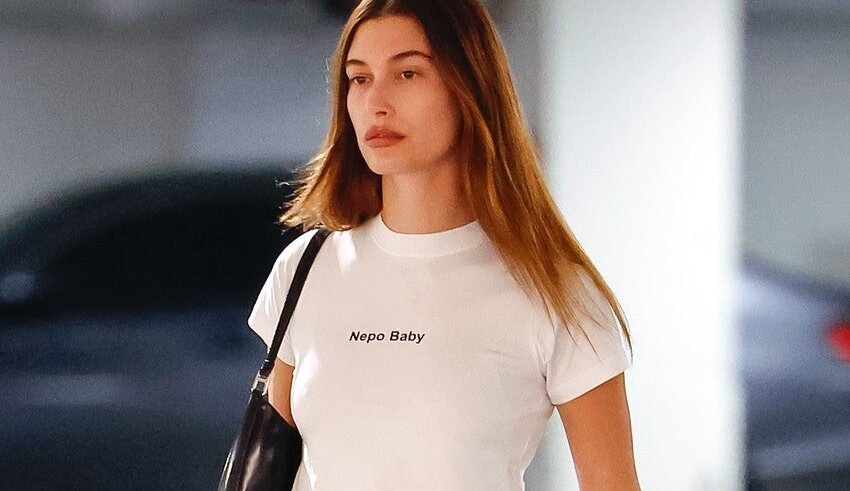 The Rhode Skin founder was photographed wearing a baby tee with the words "nepo baby" emblazoned across the front on Friday.
(c) Flipboard

The 26-year-old creator of Rhode Skin was caught in a parking garage on Friday while wearing a baby tee with the words “nepo baby” printed across the front.

Incorporating the current “nepo baby” discussion, Bieber’s ensemble included a black bag, a pair of blue trousers that had a retro feel, and of course, Bieber herself, Justin Bieber’s wife and the daughter of actor Stephen Baldwin.

The ongoing discussion about “nepo babies,” or children of celebrities or other business insiders who have benefited from their familial connections, recently gained momentum thanks to a New York magazine cover story that highlighted a few well-known figures in the entertainment business.

While Lily Allen and Jamie Lee Curtis have voiced their opposition to the slogan, Bieber is embracing it in her most recent outfit. When Curtis shared vintage images of herself with her famous actor parents Tony Curtis and Janet Leigh in December, she referred to herself as a “OG Nepo Baby.”

Tom Hanks added his voice to the discussion by speaking to Reuters about his work on A Man Called Otto and the “family business” of the entertainment industry, as reported by The Sun. Together with his wife Rita Wilson and his four children, Colin Hanks, Elizabeth Hanks, Chet Hanks, and Truman Hanks, Hanks shares the spotlight in the entertainment world.