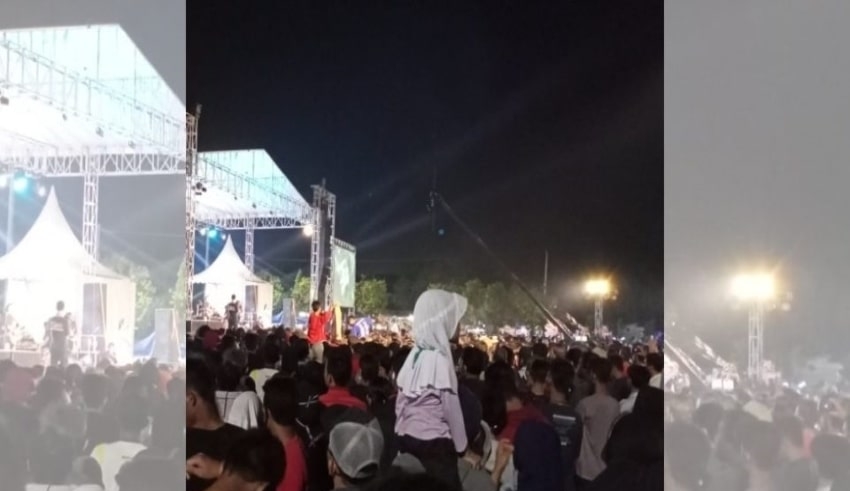 The community was shocked by the dangdut concert that accompanied a celebration party held by Wasmad Edi Susilo.
(C) coconuts

Deputy Chairman of the Regional People’s Representative Council (DPRD) of the City of Tegal Wasmad Edi Susilo (WES) charged with the Health Quarantine Law for holding a celebration party with dangdut (Indonesia’s music genre) amid the COVID-19 pandemic.

Previously, on Wednesday, September 23 the community was shocked by the dangdut concert that accompanied a celebration party held by Wasmad Edi Susilo.

“The suspect carried out a celebration of marriage and circumcision which there was entertainment attended by thousands of people without paying attention to health protocols and ignoring warnings given by authorized officers,” said Tegal City Police Chief Adjunct Senior Commissioner Rita Wulandari Wibowo, Monday, September 28.

The suspect charged with Article 93 of Law Number 6 of 2018 concerning Health Quarantine with the threat of imprisonment for a maximum of one year and/or a maximum fine of Rp 100 million.

Rita also said that as many as 18 witnesses been examined in the investigation of the case and few pieces of evidence had been secured by investigators. Evidence that was secured included the invited guest book, a statement letter made by Wasmad, and a video containing a recording of the celebration.

Even though the police had revoked the permit and reprimanded the organizers, the dangdut concert continued until the night. The police argued that there was a lack of personnel so that they did not dare to disperse.

Following this incident, South Tegal Police Chief Joeharno has removed from his duty.

He was considered allowing the dangdut concert to held amid the COVID-19 pandemic.

“The police chief has handed over and examined by the Professional and Security (Propam)”, said the Head of Public Relations of the Indonesian Police, Inspector General Argo Yuwono.

The Tegal City Government held a mass swab test after the dangdut concert around 100 residents had to undergo a test procedure after being involved.

Not only targeting the organizers, but the swab test also intended for residents who were also present to watch.

“Following the governor’s direction yesterday, not only the organizer family had swab test, but also residents who were present in the celebration party,” said Deputy Mayor of Tegal M Jumaidi.