The Asian Affairs > Latest News > World > How Ecstatic: The Historic Emirati Mission to Mars is Starting to Unfold Through Hope Probe 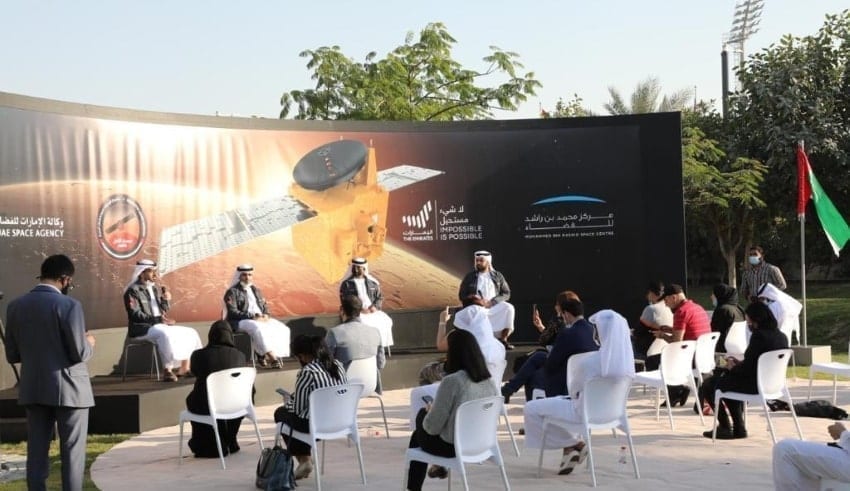 The UAE's Hope Probe, the first Arab space launch is scheduled to enter Mars orbit on February 9th making it the first of three spacecraft to arrive this month on the Red Planet.
(C) HopeMarsMission / Twitter

It was never easy to carry a mission in space but here’s Hope Probe trying to show how things are possible for their mission to become a reality to the world. In view of this, The UAE’s Hope Probe, the first Arab space launch is scheduled to enter Mars orbit on February 9th making it the first of three spacecraft to arrive this month on the Red Planet.

Only 1 day separating us from witnessing the dream of a nation enter the dark 27 minutes that determine our future and our fate. We hope for Hope as it gets closer to being captured into Mars’ orbit.#ArabsToMars #HopeProbe pic.twitter.com/VoY8Orugrr

Looking back, Mars ventures were launched last July by the United Arab Emirates, China, and the United States, taking advantage of a time when the Earth and Mars are closest. Along with this, Omran Sharaf who is the Project Manager at the Mohammed Bin Rashid Space Center shared that this phenomenon is a critically significant achievement.

Highlighting that it wasn’t just about hitting Mars with this mission. It was actually how science and knowledge are incredibly relevant and one of the mission’s key drivers, but there’s a lot more to it than that.

As the Hope Probe approaches Mars, the hope of a new scientific breakthrough will be added to humanity's record, bringing the UAE to the forefront of research and knowledge. Many wonder what drives us to go to Mars, but only those who read the future realize why we do. pic.twitter.com/Hc4O3SHgUf

Consequently, their aim was at creating disruptive change and a positive impact at home, and at inspiring a change in the priorities of youth in the Emirati which is actually a good agenda to be influenced. They added that in Emirati society, the project is now serving as a catalyst that has facilitated and funded the development of an advanced science field in the UAE. Through this, the world can see how passionate and focus UAE in dealing with this incredible mission.

For this reason the quick maturing space industry in the region will play a key role in the development of new UAE private sector businesses. They observed that the project not only sparked a technological awakening in the UAE, but also demonstrated the country’s dedication to multilateralism, particularly when it comes to exploring space and the data behind it. Morever, this exploration will definitely excite not only the scientist and the people behind the mission but the nation that sees the improvement in spacecraft realm.