The Asian Affairs > Latest News > Lifestyle > How much is the BTS Meal price in the Philippines? 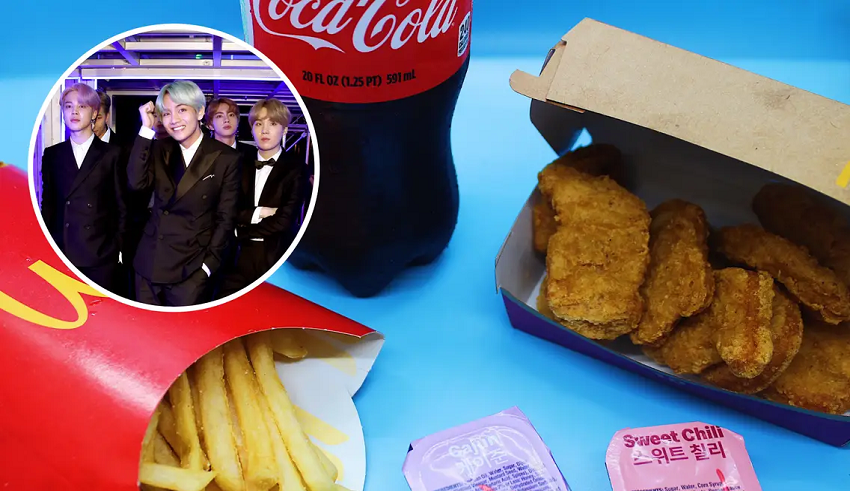 The long-awaited price change for BTS meals in the Philippines can now be found right here. On the 18th of June 2021, the introduction of BTS Meal in the
(C) McDonald's

Also Read: Google and YouTube celebrate BTS’ birthday with features and a video

How much is BTS Meal in Philippines?

The restaurants of a massive fast food chain are getting a purple makeover in celebration of the launch of a dish created in partnership with a South Korean boy band that is a global pop success.

The BTS Meal includes 10 pieces of Chicken McNuggets with special edition sauces in cajun and sweet chili, a medium Coca-Cola, and medium fries, all of which are wrapped in BTS’s characteristic purple packaging. The meal costs 260. The shipping fee is included in the selling price of 270.

McDonald’s restaurants also decorated their physical locations with purple decorations to mark the occasion of the partnership. These decorations included lights, balloons, and picture booths. Although consumers in the United States and other countries had been able to purchase the dish since May, the meal did not become accessible in this region until Friday.

McDonald’s has stated that it has collaborated with government officials to ensure that safety measures would be respected and that personnel will be able to handle any crowding that may occur as a result of BTS’s popularity in the local area.

During a media event held on Thursday, Oliver Rabatann, McDonald’s associate vice president for marketing, stated that the tanods, which are Filipino for “guards,” will be present to assist. “In order to manufacture the products as quickly as possible, there are a lot of preparations in the kitchen.”

On Wednesday, just prior to the debut, approximately two thousand medical frontline workers were the first to receive the meals, while the media and select fans got their first taste the following day.

The lunch will be offered until all of the supplies are gone. In the next several days, there will be promotions offering discounts, such as the “Lucky Ride” promotion that will run from June 21 to June 27, during which BTS fans who visit the restaurant through drive-thru will receive a free upgrade to their fries and drinks if they bring BTS memorabilia with them.

The delivery charge for orders placed through the McDelivery app will be reduced to merely 7 yen from June 25 through June 27. In addition to this, the McDonald’s app will provide users with weekly savings.

BTS is one of the most successful musical acts in the world. The group is made up of members RM, Jin, Jungkook, V, Jimin, J-Hope, and Suga. BTS has broken numerous records throughout the globe, including those on the Billboard charts and YouTube, amongst others. Their most recent online concert, which was a two-day event and was called “Muster SOWOOZOO,” attracted 1.33 million spectators.

BTS is an acronym that stands for “Bangtan Sonyeondan,” which translates to “Bulletproof Boy Scouts.” The group first got together in 2013 and took their moniker from this phrase. In 2017, they made the announcement that their acronym would be changed to stand for “Beyond the Scene” for those who speak English.

According to Billboard, their entertainment agency, BigHit Entertainment, informed Korean media that the new logo “symbolizes millennials who don’t settle for their current reality and instead open the door and go forward to accomplish advancement.”