The Asian Affairs > Economy > Increasing cost of chicken feed, a major cause for chicken price hike 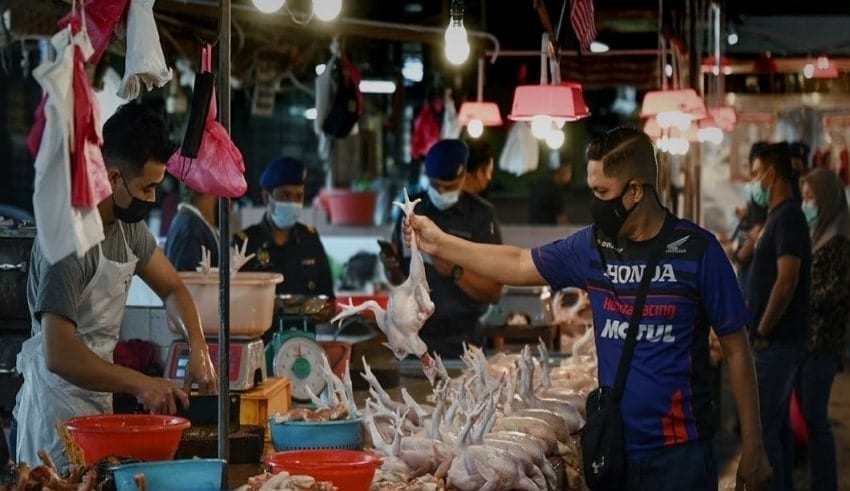 Linggi, the Minister of Domestic Trade and Consumer Affairs says the major underlying cause among the other reasons for the recent drastic increase on chicken prices is the increase in the cost of imported chicken feed.
(C) malaysianow

Datuk Seri Alexander Nanta Linggi, the Minister of Domestic Trade and Consumer Affairs says the major underlying cause among the other reasons for the recent drastic increase on chicken prices is the increase in the cost of imported chicken feed.

In order to resolve the issue of the continued hike on chicken prices, the minister had set up a meeting with the major chicken farm owners in Malaysia for a discussion on the matter and then talked it over with the Ministry of Agriculture and Food Industries (MAFI) such that a fixed price on the standard chicken will be implemented.

This resulted into RM7.90 fixed price on standard chicken for the 2021 Aidilfitri Festive Season Maximum Price Control Scheme (SHMMP), commencing this Wednesday, April 21 up until May 20.

In a media conference held to announce the 2021 Aidilfitri SHMMP, he noted that the major cause among the all other factors which caused the chicken price hike is the abrupt increase on the chicken feed cost since January particularly, Maize and Soya which are imported.

They have announced a price scheme in order to put price controls on a total of 12 items under four categories which are chicken, chicken egg, meat and seafood.

Nanta says that these price controls was carried out starting from the farms up to the retail shops in hopes that the complaints of the public on chicken prices will eventually die down.

He also assured the dealers that the price scheme would not weight them down because they made sure that the stakeholders involved in the distribution chain of chicken still profited from it.

Although their efforts made this happen, only the prices of live chicken, standard chicken and super chicken during the Aidilfitri festivity are included on the scheme.

Prices on chicken that been cut like the breast, leg and thigh parts are not included.

Traders has been warned about those who are still going to apply prices in chicken that are above the maximum price implemented. Nanta urged the traders to set their prices lower than the fixed price for the upcoming 2021 Aidilfitri SHMMP and reminded the traders that they will take necessary legal action against anyone who will still raise prices even after warning them.