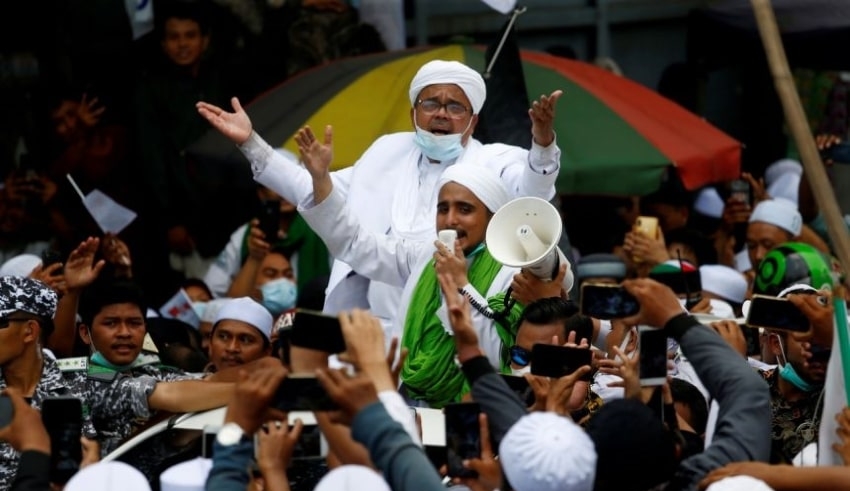 The court hearing held on a livestream presented the spiritual leader of an outlawed Islamist vigilante group ― the Islamic Defender’s Front (FPI) ― Rizieq Shihab wearing a white tunic, turban and face mask while holding on to prayer beads.
(C) straitstimes

The decision of the Indonesian court on the trial of a hardline Muslim cleric indicted for coronavirus curbs violation as well as for instigating his followers to attend mass gatherings after his return will be delivered today.

The court hearing held on a livestream presented the spiritual leader of an outlawed Islamist vigilante group ― the Islamic Defender’s Front (FPI) ― Rizieq Shihab wearing a white tunic, turban and face mask while holding on to prayer beads.

Despite Rights Issues, the Pentagon plans to Invite the Once-Banned Indonesian Minister

After fleeing to Saudi Arabia three years ago due to charges of pornography and insulting the state ideology which were dropped later, Rizieq returned to Indonesia in November. About 3,000 of the police force have been deployed to guard the courthouse in East Jakarta even before the date of the verdict.

Despite the coronavirus curbs set in place, limiting social gatherings as Indonesia struggle with the worst coronavirus outbreak across Southeast Asia, thousands of Rizieq’s followers still crowded at the airport to greet him for his return as well as attended mass gatherings in the following days.

The Muslim cleric could face up to two years of imprisonment for violating Covid-19 protocols and for breaching the health quarantine law where he incited mass gatherings which involves the wedding of his daughter where thousands of people attended.

He could also face 10 months additional imprisonment for holding an event at an Islamic boarding school located in West Java. According to his legal team, the charges were only meant to suppress the cleric as he has a large influence among the Muslim people in the world’s biggest Muslim-majority country.

In the recent years, FPI has become influential in Indonesia especially when it comes to the aspect of politics. They were among several Islamic groups that brought Jakarta down through the 2016 rallies with the Christian governor being charged for blasphemy which have inflicted anxiety within President Joko Widodo’s administration as they perceive the mass protests against the governor as an Islamist threat. The government then ordered Islamist groups crackdown where FIP and Hizb-ut Tahrir Indonesia (HTI) have been banned.