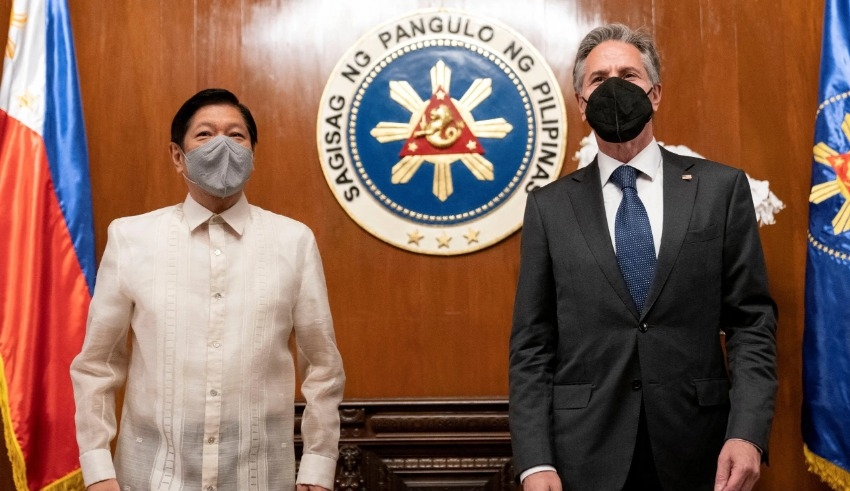 On Saturday, Philippine President Ferdinand Marcos Jr. stated that the unpredictable geopolitical scenario and the aftermath from US House Speaker Nancy Pelosi’s visit to Taiwan highlight the importance of the connection between the United States and the Philippines (Aug 6).

Pelosi’s visit, according to Marcos, “did not heighten the heat” of a situation that was already dangerous. Marcos made these comments while meeting with US Secretary of State Antony Blinken at the presidential palace in Manila.

Blinken is the highest-ranking US official to travel to the Philippines since the inauguration of Marcos, the son of the late strongman whom Washington helped flee into exile in Hawaii after a 1986 “people power” uprising in the Philippines. Blinken’s visit comes a little over a year after Marcos was inaugurated as president of the Philippines.

He gave Marcos his word that the United States would live up to its end of the bargain they had made decades ago on their combined defense.

Blinken told Marcos that the coalition was already powerful but that he believed it had the potential to become even more powerful.

As a result of the Philippines’ position as a fulcrum in the geopolitical competition between the United States and China, President Marcos is faced with the difficult and daunting task of attempting to strike a balance between his nation’s links to these two great economic powers.

Blinken’s trip to the Philippines took place during a time of escalating tensions, heated rhetoric, and a demonstration of Chinese military power around Taiwan. These developments were a direct result of Pelosi’s visit to Taiwan, which China recognizes as part of its territory even though it is self-governed.

Pelosi’s visit, according to Marcos, “simply underlined… the severity of that dispute.”

Before entering a conference behind closed doors, he said to Blinken, “We have been at that level for a good while, but we have sort of gotten used to the idea.”

After that, Blinken participated in a virtual meeting with Enrique Manalo, the foreign minister of the Philippines, who is now recovering from COVID-19.

Manalo told Blinken that Washington was “an important ally, partner, and friend,” but he also emphasized the need for calm to prevail as tensions grow over Taiwan, an island that is only 260 kilometers away from the Philippines mainland.

According to Manalo, “The Philippines continues to look to the larger nations in the hopes that they will assist in keeping the peace and calming the waters.”

“Any further escalation of hostilities in the region is something that we just cannot afford,” the president said.

Blinken stated that maintaining peace and security was a struggle that the United States faced everywhere, but that the country was “committed to act responsibly, so that we prevent catastrophe, so that we avoid confrontation.”

After attending a summit of the Association of Southeast Asian Nations in Cambodia, Blinken made his way back to the Philippines’ capital city of Manila on Friday.

There, he called China’s drills “a substantial escalation,” and criticized them as such.

The Philippines, like its fellow ASEAN members, does not formally recognize Taiwan and has shown little inclination to support Taipei in its conflict with Beijing, which is the country’s most important trading partner.

The connection between the United States of America and the Philippines, namely with the Marcos family, is a complicated one.

As tensions in the region continue to rise, Washington is eager to maintain its security alliance with Manila. This alliance includes a mutual defense treaty as well as permission for the US military to store defense equipment and supplies on several bases in the Philippines. Both of these aspects are important to Washington.

On Saturday, Blinken characterized the United States’ dedication to the mutual defense pact as “ironclad.”

He stated to the reporters, “We will always stand for our partners. Because of what’s going on to the north of here in the Taiwan Strait, it’s vital to emphasize that,” the speaker said.

Marcos has given indications that he will try to find a middle ground between China and the United States, both of which are competing to have the closest connections with his administration.