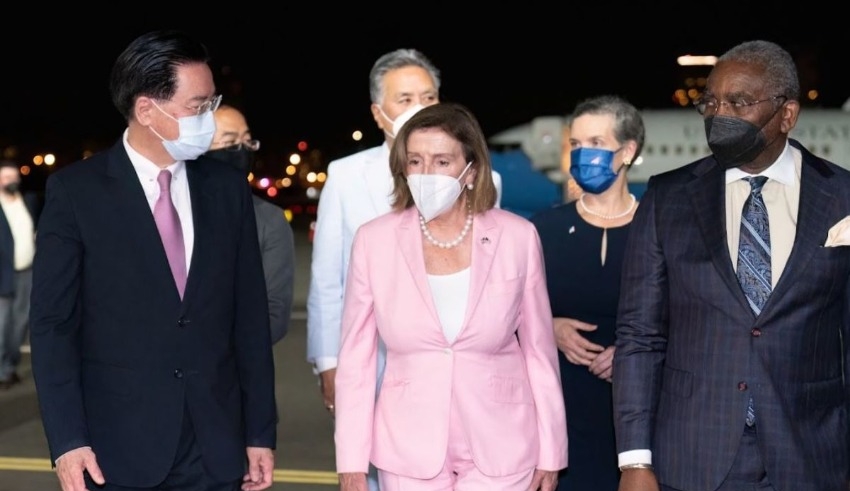 During the highest-level US visit to Taiwan in 25 years, House of Representatives Speaker Nancy Pelosi praised the self-governed island as “one of the freest societies in the world” and pledged American solidarity. This prompted China to issue a scathing condemnation of the visit.

Beijing has shown its displeasure with House Minority Leader Nancy Pelosi’s visit to an island that it claims to be a part of China by conducting a flurry of military operations in the waters surrounding the island, summoning the US ambassador in Beijing, and announcing that it will suspend the import of a number of agricultural products from Taiwan.

According to Taiwan’s defense ministry, some of China’s scheduled military drills would take place within Taiwan’s 12 nautical mile sea and air boundaries. This unprecedented step has been described by a senior defense official to the media as “amounting to a sea and air blockade of Taiwan.”

Pelosi arrived in Taiwan late on Tuesday with a congressional group on an unannounced visit. She did so in defiance of China’s repeated warnings, and she said that this demonstrates the unwavering commitment of the United States to Taiwan’s democracy.

Pelosi reminded Tsai Ing-wen, the President of Taiwan, that the purpose of her delegation’s visit to Taiwan was to “make it absolutely clear that we would not forsake Taiwan.”

This is the message that we are conveying here, today: that the solidarity of the United States of America with Taiwan is more important now than it has ever been.

Pelosi, when addressing the legislature, stated that recent legislation passed in the United States that aims to improve the American chip sector so that it can compete more effectively with China “offers greater opportunities for US-Taiwan economic collaboration.”

Pelosi continued by stating that the newly enacted legislation in the United States that aims to improve the American chip sector so that it can compete more effectively with China “offers greater possibility for US-Taiwan economic collaboration.”

“Once more, the purpose of our delegation’s visit here was to deliver an uncompromising message. The United States of America stands with Taiwan.”

Long a critic of China, particularly on the issue of human rights, Pelosi was scheduled to meet later on Wednesday with a former Tiananmen activist, a Hong Kong bookseller who had been detained by China, and a Taiwanese activist who was just recently released by China, according to people familiar with the matter. Pelosi has been a critic of China for a long time.

Newt Gingrich, who served as Speaker of the House from 1995 to 1997, was the last person to visit Taiwan. However, this visit comes at a time when relations between China and the United States are rapidly worsening. Furthermore, China has become a far more powerful economic, military, and geopolitical powerhouse over the course of the last quarter century.

China believes Taiwan to be an integral part of its territory and has never abandoned the idea of employing military force to subjugate the island to Chinese rule. The United States of America issued a strong warning to China, advising them not to use the visit as an excuse to take military action against Taiwan.

In an act of retaliation, China’s customs department announced the suspension of imports of citrus fruits, chilled white striped hairtail, and frozen horse mackerel from Taiwan, and China’s commerce ministry banned the export of natural sand to Taiwan. Both of these measures were taken in response to the fact that Taiwan had violated China’s territorial sovereignty.

Taiwan fired flares at a drone near a remote island

Just before Nancy Pelosi landed in China, the Twitter-like platform known as Weibo failed. Weibo blamed the accident on overstretched broadband capacity, but they left out Taiwan from their explanation.

Shortly after the arrival of Nancy Pelosi, the Chinese military made an announcement that they would be conducting joint air and sea drills near Taiwan as well as test launches of conventional missiles in the sea to the east of Taiwan. The Chinese state news agency Xinhua described live-fire drills and other exercises around Taiwan from Thursday to Sunday.

Pelosi’s visit “has a severe impact on the political foundation of China-US relations and seriously infringes upon China’s sovereignty and territorial integrity,” according to the Chinese foreign ministry. The ministry also stated that the visit “seriously damages” efforts to maintain peace and stability in the Taiwan Strait.

Tuesday, before Pelosi’s arrival, Chinese warplanes flew low over the line that separates China and Taiwan in the Taiwan Strait. In response to Pelosi’s visit, the Chinese military has stated that it has activated its highest level of preparedness and will conduct “targeted military activities.”

John Kirby, a spokesman for the White House’s national security team, stated on Tuesday, after Pelosi’s arrival, that the United States “is not going to be intimidated” by China’s threats or bellicose rhetoric, and that there is no reason why her visit should precipitate a crisis or conflict. Pelosi is scheduled to meet with Chinese President Xi Jinping on Wednesday.

According to Kirby, China may engage in “economic pressure” toward Taiwan, and he added that the impact on American-Chinese ties will depend on the steps that Beijing takes in the upcoming days and weeks.

Despite the absence of any formal diplomatic ties between the two countries, the United States is required by domestic law to equip Taiwan with the capability to defend itself. China sees visits by US officials to Taiwan as conveying a reassuring message to those on the island who support Taiwan’s independence from the United States.

Taiwan denies China’s claims of sovereignty and asserts that only the people of Taiwan have the authority to determine the future of the island.

On Wednesday, Taiwan’s government announced that the country’s armed forces have boosted their state of readiness. The defense ministry of the island stated on Tuesday that 21 Chinese aircraft had entered its air defense identification zone. The ministry also stated that China was attempting to threaten vital ports and cities by conducting maneuvers in the waters surrounding the island.

According to Reuters on Wednesday, a senior Taiwanese source who is involved with the country’s security plans stated that “the so-called drill regions are falling within the busiest international channels in the Indo-Pacific region.”

The individual stated that “we can see China’s objective,” which is “to make the Taiwan Strait non-international seas, as well as to make the entire area west of the first island chain in the western pacific its sphere of influence.”

In a joint statement, the foreign ministers of the G7 countries—Canada, France, Germany, Italy, Japan, Britain, and the United States—and the European Union urged China to resolve the Taiwan issue peacefully and expressed concern over China’s “threatening actions,” specifically live-fire exercises and “economic coercion.”
They also mentioned that traveling worldwide is something that is “common and customary” for politicians.