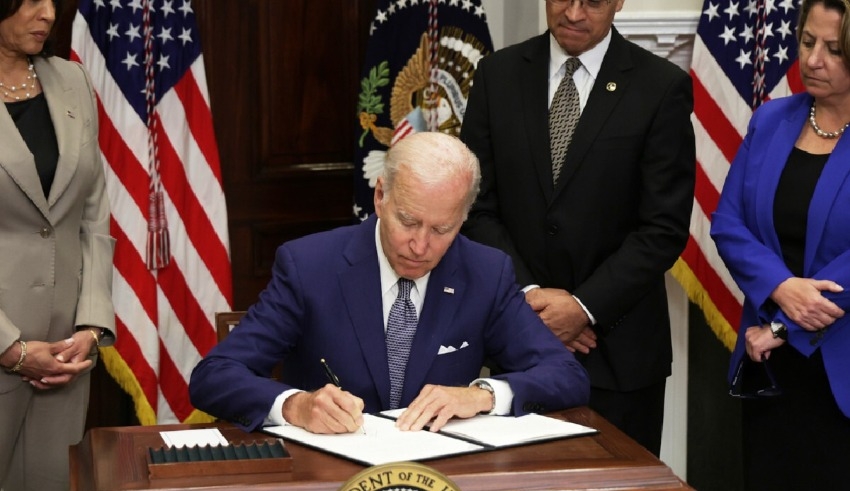 After the Supreme Court's decision in June to overturn Roe v. Wade, US President Joe Biden declared that the court was "out of control" one month ago.
(c) Politico

As President Joe Biden signed a second executive order aimed at defending abortion rights on Wednesday (August 3), he stated that the Supreme Court and Republicans are confused about the strength of American women. Biden made this statement at the same time.

The directive requests that the Department of Health and Human Services on the federal level consider enabling Medicaid monies to be used to assist in making it easier for patients to travel out of state for abortions. In the same vein as the previous order signed by Biden in July, this one is aimed to address the recent decision by the Supreme Court to terminate the constitutional right to abortion across the country.

It is anticipated that it will have a limited impact, particularly in light of the fact that Republicans in US states are pushing for a wave of laws restricting abortion, access to medicine, and funding for such services.

The acts of the president come a day after voters in Kansas rejected a similar campaign to remove abortion rights from the constitution of that state. In the first statewide election test to take place after the Supreme Court decision, the vote was a landslide victory for the campaign advocating for abortion rights.

“I seriously doubt that the court, or the Republican party for that matter, has any concept of how women are going to react to this. They have no idea the influence that women in the United States can have,” Biden stated. “Late last night in Kansas, they received the news.”

He referred to the outcome in Kansas as a “decisive win” and stated that the voters in the state had sent a “strong signal” that makes it abundantly apparent that politicians should not interfere with the fundamental rights of women.

“We saw that last night in Kansas,” Biden stated, referring to the fact that the struggle is not yet done. According to President Joe Biden, the Supreme Court “practically dared women in this nation to go to the ballot box and restore the right to choose,” which it had just taken away.

After the Supreme Court’s decision in June to overturn Roe v. Wade, which put an end to a half-century of protections for women’s reproductive rights, President Joe Biden declared that the court was “out of control” one month ago. The court is currently weighted 6-3 in favor of conservative judges.

His first directive, which was issued at the beginning of July, authorized the health department of the federal government to increase access to medication abortions and safeguard the safety of women who travel for abortions.

The most recent step is an expansion on those previous actions. On the other hand, similar to the first one, it is not clear how those objectives can be accomplished. According to a senior administration official, it asks the Health and Human Services Department to consider using funds including Medicaid, which is an insurance program funded by the federal government and the states that it oversees, in order to support low-income women who travel out of state for abortion services.

The official who spoke on condition of anonymity said that it requests Secretary of Health and Human Services Xavier Becerra to explore asking states to apply for Medicaid waivers when treating patients who cross state lines for reproductive health services.

The Hyde Amendment is a policy that was passed by Congress that stipulates Medicaid will not pay for an abortion unless the woman’s life is in danger or the pregnancy was the product of rape or incest. This legislation makes it unclear whether or not the order will be carried out.

In addition, it instructs the government to guarantee that health care providers comply with federal non-discrimination rules when giving such services, and it commands the department to collect data in order to measure the impact that the ruling has had on maternal health, according to the source.

The order was signed by the President of the United States during the very first meeting of the interagency task force on reproductive healthcare access, which was established back in July. At the meeting, President Kamala Harris, who has spent the past few weeks traveling to six different states to convene state legislators about protecting reproductive health care, joined President Joe Biden and referred to the abortion problem as a “healthcare crisis in the United States.”

The Democrats in the Senate did not agree with President Biden’s proposal to change the chamber’s “filibuster” rule, which stipulates that 60 senators out of a total of 100 must support the same piece of legislation for it to be possible for them to pass a law establishing a national right to abortion.

Kamala Harris, the current US President, has the ability to cast the deciding vote in the Senate, which is now deadlocked.

Since then, President Biden has shifted his focus to encouraging voters to send more Democrats to Congress in the upcoming midterm elections on November 8. These elections will take place at a time when Republicans are favorites to win back a majority in the House of Representatives and possibly also in the Senate. On Wednesday, he made a second attempt to convince voters to side with him.

The Democrats have high hopes that the issue would encourage voters to cast their ballots in November.

According to a poll conducted by Reuters, women Democrats place a high priority on preserving their access to abortion services. Over seventy percent of Americans are of the opinion that the decision should be made between a woman and her physician.

As the first legal challenge to state abortion regulations since the Supreme Court judgment, President Biden’s Justice Department filed a lawsuit against the state of Idaho on Tuesday, claiming that the state legislation in question imposes a “near-absolute ban” on the practice of abortion.

Attorney General Merrick Garland announced on Wednesday that the Justice Department will file a motion to dismiss a lawsuit filed in Texas against the requirement put forth by the Biden administration that all medical professionals in the United States be prepared to perform life-saving abortions in the event of an emergency or risk having their Medicare funding cut off.