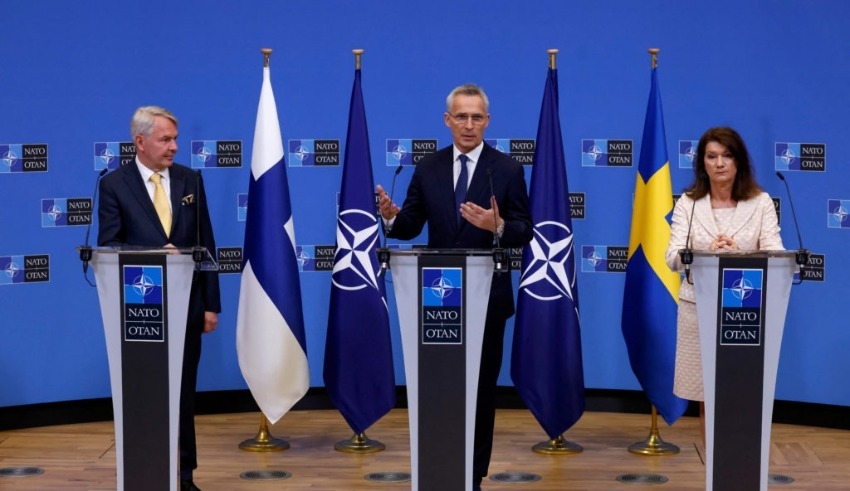 The new news came as NATO moved closer to announcing the most significant expansion of the alliance in decades as a response to the invasion of Ukraine.
(c) PBS

The government of Ukraine reported that Russia had begun assembling a military strike force with the intention of attacking Kryvyi Rih, the hometown of President Volodymyr Zelenskyy. This news came as NATO moved closer to announcing the most significant expansion of the alliance in decades as a response to the invasion of Ukraine.

On Wednesday (August 3), the United States Senate and the Italian parliament both gave their blessing for Finland and Sweden to become the 30th and 31st members of the North Atlantic Treaty Organization (NATO). An attack on one member of NATO is considered an attack against all other members because membership in NATO requires ratification from each of the organization’s 30 states.

Joe Biden, the President of the United States, was quoted as saying in a statement that “This historic vote sends a critical signal of the continuing, bipartisan US commitment to NATO,” with the goal of “ensuring our Alliance is prepared to tackle the challenges of today and tomorrow.”

Russia’s invasion of Ukraine on February 24 prompted repeated Russian warnings to Finland and Sweden about the dangers of joining NATO.

Last month, all thirty of NATO’s allies signed the accession protocol, which paves the way for them to join the nuclear-armed alliance led by the United States provided the decision is ratified by its members.

The ratification process can take as long as a year.

On Wednesday, Ukraine shot down suggestions made by former German Chancellor Gerhard Schroeder that Russia wanted a “negotiated solution” to the five-month war. Ukraine also stated that any dialogue would be contingent on a Russian ceasefire and the withdrawal of its troops. Schroeder made the comments in an interview with German newspaper Die Welt.

In March, there were some preliminary attempts to hold peace talks, but they were unsuccessful.

According to a report that was published by the South China Morning Post (SCMP) on Thursday, Ukraine was looking for a chance to communicate “personally” with the leader of China, Xi Jinping, in an effort to help halt the war.

In an interview with SCMP, Zelenskyy voiced his support for a resolution to the conflict by calling on China to exert its political and economic weight over Russia.

“It’s a very strong and influential state. It has a robust economic system… In order to be able to exert political and economic influence over Russia. In addition to this, China holds a permanent seat on the United Nations Security Council,” According to the report, Zelenskyy was cited as adding.

On Wednesday night, Ukraine issued a statement saying that Russia was involved in significant military action in the east, northeast, and south of the nation. They also issued a warning that Moscow may be preparing for fresh offensive operations in the southern part of the country.

Dmytro Zhyvytsky, the governor of Sumy region, which is located on the border with Russia, reported that Russian forces had fired a total of 55 missiles on Wednesday, shelling three towns in the region. There were no reported casualties, although there was damage to residential and business properties.

He stated that residential areas of the Krasnopilska village were struck by eight artillery munitions.

The reports from the battlefield could not be verified by Reuters.

Russia has stated that it does not target civilians; nonetheless, in the largest combat that Europe has seen since World War II, several towns and cities have been destroyed, and thousands of civilians have been killed. The Ukrainian government and its Western supporters have leveled allegations of war crimes against Russian forces.

In what Russian President Vladimir Putin referred to as a “special military operation,” Russian forces were deployed in Ukraine in an effort to purge the country of fascists. The West and Ukraine have accused Putin of carrying out an “imperial” territory grab without provocation.

The war has resulted in a crisis of energy and food on a worldwide scale. Wheat is produced in around one third of the world’s total by Russia and Ukraine, and Russia is the primary supplier of energy to Europe.

A deal reached between Moscow and Kyiv, which was mediated by the United Nations and Turkey, to allow safe passage of grain ships from Ukraine has been praised as a rare instance of diplomatic achievement during the conflict.

On Wednesday, the first ship bringing grain from Ukraine since the beginning of the conflict made its way across the Bosphorus Strait.

Early on Monday morning, the cargo ship Razoni sailed from the port of Odesa on the Black Sea to the port of Tripoli in Lebanon carrying 26,527 tonnes of grain.

Following the departure of the Razoni, a top Turkish official stated that three ships may leave Ukrainian ports daily. The infrastructure minister of Ukraine stated that 17 further ships had been filled with agricultural produce and were waiting to set sail.