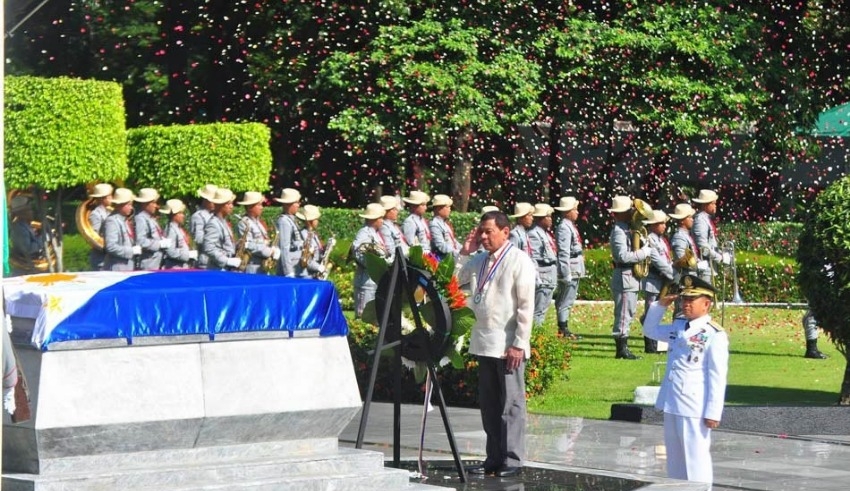 Since the time of the American occupation, the day known as National Heroes Day has been observed as a national holiday for the entire Filipino nation.
(c) ABS-CBN News

On Monday, August 29, President Ferdinand Marcos Jr. paid respect to the “great heroes of our nation” in the cemetery where his late father and namesake was granted a hasty hero’s burial years ago. The cemetery is located in the same area of the Philippines.

“We also remember with reverence the toil, blood, and lives that they gave up for our sake, our freedom, and our future. Because of their selflessness, the challenges that we as individuals and as a nation have faced have become more manageable,” remarked Marcos at the Libingan ng mga Bayani in Taguig City to commemorate National Heroes Day.

Workers from the agricultural and manufacturing sectors were recognized by the President, who also serves as the Secretary of Agriculture. During his speech at Taguig, Marcos gave tribute to a variety of individuals, including those working in education and healthcare, the armed forces of the nation, barangay officials, community leaders, and Filipinos working outside of the country.

“Now is the moment for us to hone our skills and make preparations for the swift and definite revival of our economy. It is imperative that we have faith that our collective future will be one that is both more secure and more progressive. The lessons of our past have taught us that it is only through our combined efforts that we will be able to achieve our goals,” he continued.

This line was an allusion to Marcos’ primary pledges following the triumph, which were of a rebound from the economic problems after years of lockdown caused of COVID-19.

Marcos also used the address to push the government’s immunization booster drive and to restate his pledge to open specialized hospitals and health centers in regions and provinces outside of Metro Manila, which he made in his State of the Nation Address.

On Monday, Marcos made good on his vow to open hospitals for military personnel in the Visayas and Mindanao regions.

Since the time of the American occupation, the day known as National Heroes Day has been observed as a national holiday. After having been celebrated on the last Sunday of August in the past, the holiday was shifted to the last Monday of August while Gloria Macapagal-Arroyo was in the presidency.

“Specifies no hero; the law that put into reality the commemoration does not name a single one,” the Official Gazette states regarding National Heroes Day.

When the remains of Ferdinand E. Marcos were moved from Ilocos and buried at the Libingan ng mga Bayani in 2017, the question of what constitutes a hero became a part of the national narrative and the news cycle in the Philippines. This occurred with the support of the president at the time, Rodrigo Duterte, who at the time was in office.

In 2016, when Duterte was just a few months into his term as president, the revered cemetery played host to the interment of the late dictator’s bones. When Rodrigo Duterte was running for president in 2016, one of his campaign pledges was to ensure that fallen heroes would be given a proper burial.

Ferdinand Marcos Jr. has ‘no intention’ of rejoining ICC

The Philippines has a sugar scarcity, as confirmed by Coke, Pepsi, and RC Cola

To this day, there are people and organizations that hold fast to the belief that the late dictator does not merit a spot in the Libingan ng mga Bayani, particularly those who were harmed by the implementation of Martial Law during Marcos’s first term as president.

Depending on the circumstances, the current President has either embraced the legacy left by his father, which includes his father’s notoriety, or he has chosen to remain silent about it.

On August 21, also known as Ninoy Aquino Day, the Presidential Palace was unusually quiet. This day is celebrated as a holiday in honor of the late Ninoy Aquino, who was a prominent opposition figure during Martial Law under Marcos.

In a few of his addresses, Marcos Jr. has mentioned his father and the causes or endeavors that his senior was an advocate for. The vow to establish specialized health facilities in the regions and provinces, for example, has a connection to two pet projects that his late father was working on before he passed away: the Heart Center and the Lung Center of the Philippines. It was Marcos’ allies who made explicit pledges throughout the campaign that the son would continue the legacy of the father.

During the address that he gave on August 29, there was not a single mention of his father.

Instead, President Marcos reverted to the rhetoric of togetherness that he had used during his 2022 campaign. “Let us make use of our ability to reshape our world for the common good of all. It is my hope that we would not allow ourselves to get enslaved by a crab mentality or division. Instead, may we be the vehicles of harmony and peace throughout the world,” he remarked.

Marcos is the first president in the post-Martial Law era to receive a majority of the vote after winning the presidential elections in 2022 by a landslide margin. Marcos’ most important ally and running mate in 2022 is Vice President Sara Duterte, who is also concurrently in charge of education. She is the daughter of the person who came immediately before Marcos.

In a separate statement, Vice President Duterte took inspiration from the “patriotism” of previous generations of Filipinos, while at the same time condemning the “acts of hostility” committed by forces that are “anti-people and anti-government.”

The celebration of National Heroes Day in Davao City was led by Mayor Rodrigo Duterte.