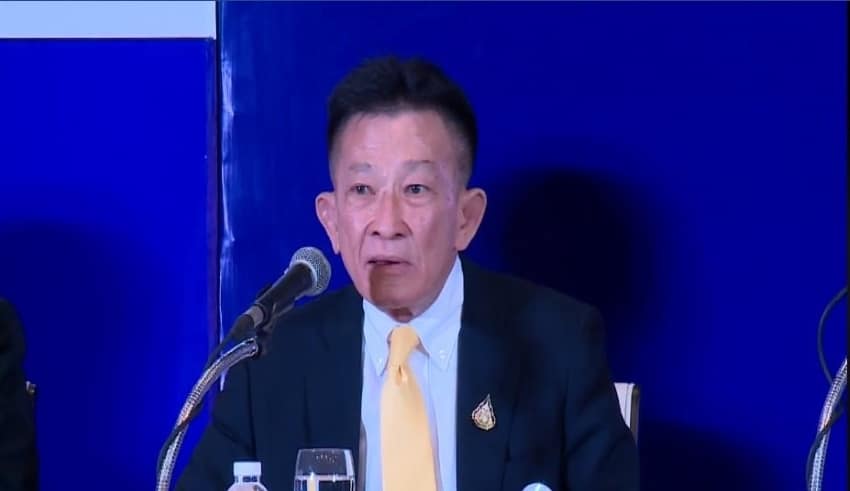 The main opposition Pheu Thai Party declared on Monday that it would table a motion in Parliament on Tuesday to pave the way for a charter rewriting body to be set up.
(C) Thai PBS World

The main opposition Pheu Thai Party declared on Monday that it would table a motion in Parliament on Tuesday to pave the way for a charter rewriting body to be set up, although it risks being vetoed by the Senate, according to a political source. Pheu Thai’s key figures told the press conference on Monday that the amendment to the Constitution will be completed easily and without a referendum after the amendments have been finalized.

This Charter was approved in a referendum on 7 August 2016. Pheu Thai chief Sompong Amornvivat said that the motion was aimed at amending Section 256 of the Constitution in order to promote constitutional changes.  Under Section 256, a constitutional amendment requires the support of at least one third of the Senate or 84 senators. Conservatives have found the provision a big obstacle to reforming the charter.

Mr Sompong said that the section should be changed so that a meeting can be set up to draft a new constitution, with or without the help of the Senate. The Pheu Thai chief said that it would take too much time to implement the amendment and that it would also be too expensive to hold a referendum on the proposed charter. His party urged the government and the senators to sign the resolution.

Most politicians unanimously accepted that the Charter was faulty and that it should be recast, although the strategies used to accomplish the amendment differ. Two urgent changes demanded by opposition lawmakers concern the electoral system, which they have criticized as “complicated” and “unfair,” and the composition of the Senate, which is seen as beneficial to the government.

Nevertheless, the senators have said that they would not accept the proposed amendments if they result in the Senate being stripped of its power to vote in the Prime Minister and/or the present batch of senators being expelled. Mr Seri said that unless there is strong information on the content of the proposed Charter, the Senate would not support the change.

He emphasized that the new Senate had been given a provisional clause in the constitution to control the implementation of the reforms of the country during its five-year term. Pheu Thai Party Secretary-General Anudith Nakornthap said that a House Committee had been set up to study charter reform for quite some time.

He said the members of the committe including members of the government and the opposition, as well as academics agree that the undemocratic essence of the present charter is holding the country back.

Opposition leader Sutin Klungsang argued that the charter panel would represent the citizens in deciding to accept the amendments suggested by the study panel headed by the PM ‘s advisor, Pirapan Salirathavibhaga, or to reject them in favor of a different proposal.

Mr Sutin said that the changes will be approved as soon as the Parliament can process them.