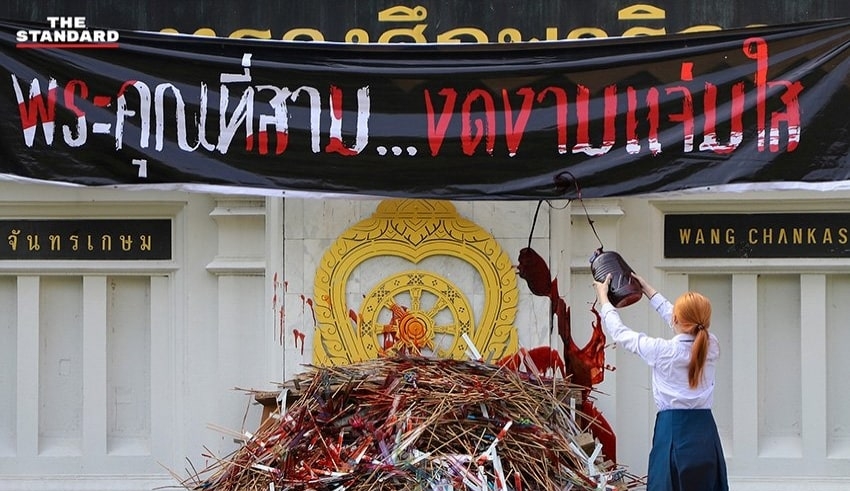 Teacher’s day is something to be celebrated in a special way but it’s different for the students who stacked bamboo canes and documents in front of the Ministry of Education of Thailand .
(C) TanwarinS_MFP / Twitter

It is expected that Teacher’s day is something to be celebrated in a special way but it’s different for the students who stacked bamboo canes and documents in front of the Ministry of Education of Thailand and splashed red paint on it to condemn corporal punishment, one of many demonstrations.

In view of this, The Bad Student party, which has been part of an unprecedented youth-led pro-democracy campaign that has roiled the kingdom for six months, staged a small demonstration to mark Teachers’ Day.

In its demands for an overthrow of the government of Premier Prayut Chan-o-cha and for improvements to the monarchy, the leaderless movement is essentially unified. Yet others have also taken advantage of the marches to stress their concerns against the status quo, such as the treatment of different disadvantaged groups and the school system.

The Protest leader Lapanapat Wangpaisit also shared that the protesters wished to use Wai Kru Day to highlight the two sides of the education system in Thailand, or Teachers’ Day. Along with this, Lapanapat shared that there’s a beautiful side and a dark side; a side in which teachers hurt students. So they want to let the ministry know and fix this problem.”

Thailand’s ultra-conservative school system, as well as its strict laws, has long faced scrutiny for emphasizing rote learning. If they are considered to be disobedient, students face serious discipline and public humiliation. The Poor Student party, whose methods have received legal challenges from its participants, advocates for institutional reform, a revision of the curriculum, and a relaxing of laws that regulate anything from hairstyles to skirt lengths.

Consequently, A female student in a school uniform hurled blood-red paint at the entrance of the ministry on Saturday, which had rulers, scissors, and slender bamboo canes stacked high before it. Then she sprayed the paint on herself, claiming that it was indicative of the students’ experience in school and holding up the three-finger salute a sign copied from the film trilogy The Hunger Games by the pro-democracy movement.

Another party assembled at the Victory Monument in Bangkok to unfurl a 112-meter long banner condemning the oppressive royal defamation rule of the kingdom, which protects the monarchy of Thailand from criticism and is referred to as section 112. The Police detained at least two demonstrators who said the party was breaking anti-gathering laws, and the rally was disbanded.

But the brief altercation with the authorities sent the hashtag Mob 16 January on Thai social media bringing a burst of outrage to the Samyan district of Bangkok to call for the release of their comrades. The three demonstrations came after the national police chief called for a step-up in law enforcement on Saturday morning to combat insurgent protests.

So far, serious charges such as sedition have been slapped on dozens of people involved in the campaign, while over 40 have been convicted under the lese majeste statute.