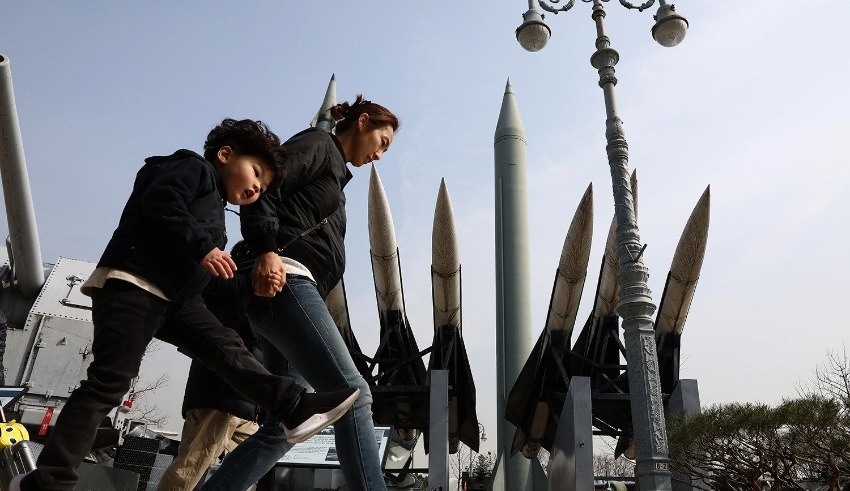 "I feel that if South Korea were to possess nuclear weapons, North Korea's military and diplomatic direction towards us would undoubtedly alter," said Changho.
(c) Foreign Policy

Kim Yo Jong, the sister of North Korean leader Kim Jong Un, recently referred to South Korean President Yoon Suk-yeol as “childish” and called his offer of aid in exchange for denuclearization “simple.”

“To think that the plan to barter ‘economic cooperation’ for our honor, (our) nukes, is the great dream, hope and plan of Yoon, we came to realize that he is really simple and still childish,” she said in a statement that was carried by the North’s state news agency KCNA. She called Yoon’s offer the “height of absurdity.”

She went on to say that nobody gives up their future for some corn cake.

This week, the North Korean government approved a law that makes the country’s nuclear status irreversible. Kim Jong Un has stated that he will never give up the weapons, even if the country is subject to sanctions for the next 100 years.

As of the end of June, North Korea had conducted a record-breaking 31 tests of ballistic missiles so far this year.

Three months later, the United States issued a warning that North Korea may perform its seventh nuclear test – and its first since 2017 – at “any time.” Satellite photos suggested that it was reactivating its Punggye-ri nuclear weapons test site in March.

After Seoul and Washington began preliminary joint drills in preparation for their long-suspended live field training exercise Ulchi Freedom Shield, North Korea launched two cruise missiles in the direction of the Yellow Sea a month ago.

China and Russia are the other two members of the nuclear-armed triad that are located near South Korea.

Shin Changho, an artificial intelligence engineer, is of the opinion that his country ought to possess nuclear weapons due to the presence of such neighbors as well as the growing risk of war.

Shin stated the following on the show Insight that airs on CNA: “I feel that if South Korea were to possess nuclear weapons, North Korea’s military and diplomatic direction towards us would undoubtedly alter.”

“So I think North Korea would be more wary about armed conflicts than they are currently,” he said, referring to the fact that South Korea is “far ahead” when it comes to conventional weaponry and that the North would lose a crucial edge as a result.

According to a survey that was conducted and released earlier this year by the think tank Chicago Council on Global Affairs, Shin could very well be part of the population that constitutes the majority of South Koreans.

The participants’ overwhelming preference (67%) was for an independent arsenal rather than an American deployment (9 per cent).

An assistant professor at the University of North Korean Studies named Kim Dong-yub is of the opinion that the latest tests conducted by the North are not simply for “diplomatic or negotiation purposes.”

According to what he said, “they can unite their country by improving their technology, which will ease the fears of their residents regarding the security of their country.”

The president of the National Association of North Korean Defectors, Jang Seyul, is in agreement with the notion that Kim Jong Un’s “obsession” with nuclear development is a strategy for protecting his dictatorship.

After two summits between Kim Jong Un and the previous president of the United States, Donald Trump, in 2018 and 2019, both of which resulted in nothing, assistant professor Kim is of the opinion that Pyongyang has given up on its expectations of the United States and South Korea.

According to the associate professor Kim, “(Kim Jong Un) emphasized that he wishes to put an end to the hostile policies and joint drills that the United States and South Korea have been conducting.”

“From Singapore to Hanoi, he returned both times empty-handed… I believe it hit him hard. He is basically saying, ‘I’ve been tricked by you once, I will not be tricked a second time.'”

In spite of the increasing danger posed by the North, South Korean President Yoon stated in a speech delivered the previous month that his country has no plans to develop its own nuclear deterrent.

In the event that an attack is imminent, he has however given his approval for preemptive strikes against the North’s missiles and maybe even its senior leadership. He has also ordered an upgrade of the operational plans of the military.

According to Reuters, North Korea’s new law appears to take aim at these plans by allowing for preemptive nuclear strikes in the event that an imminent attack by weapons of mass destruction or against the country’s “strategic targets,” including its leadership, is detected. This law also allows for the execution of the country’s leadership.

This goes beyond the provisions that are already in place for the use of nuclear weapons to repel an invasion or attack from a hostile nuclear state and to make retaliatory attacks.

It is “inevitable” for South Korea to have its own nuclear weapons, according to Cheong Seong-chang, director of the Centre for North Korean Studies at The Sejong Institute, a think tank.

He highlighted two reasons for this: the first was to create a power balance with North Korea, and the second was uncertainties about whether or not the United States would “ensure South Korea’s security through prolonged deterrence.”

Both South Korea and Japan are protected by the United States’ nuclear umbrella, which is the country’s assurance that it will use its nuclear weapons to repel a nuclear assault launched against them.

In a recent article published in Foreign Policy magazine, Robert E. Kelly, a political scientist at Pusan National University, made the observation that the United States “does not pressure friendly nuclear weapons states, including itself, to meet NPT requirements.”

Signatories to the NPT are put at a disadvantage, according to critics of the treaty, because countries that already possess nuclear weapons and non-signatories like North Korea are free to continue expanding their nuclear arsenals.

And according to Shin, an AI developer, South Korea’s acquisition of nuclear weapons would put it “really” on level with other sophisticated countries.

A study that was conducted in Japan and published in the year 2020 reported that 75 percent of over 1,300 Japanese people surveyed believe that their country should join the Treaty on the Prohibition of Nuclear Weapons. Meanwhile, in Japan, discussion on nuclear weapons has also become more prevalent; however, the Japanese public is largely opposed to the weapons of mass destruction.

According to Ryozo Kato, a former Japanese Ambassador to the United States, the nation also adheres to the three non-nuclear principles of not possessing, producing, or allowing the introduction of nuclear weapons to Japanese soil. While this is an important national policy, it is “not sacrosanct,” and the nation should consider the circumstances of international security.

Despite disagreements over islands such as Senkaku or Diaoyu, Japan and China are “some distance from a full-blown military showdown,” according to an Indo-Pacific security analyst from Taiwan’s Tamkang University named Lin Ying-yu. This is the case despite the fact that both countries claim sovereignty over the islands in question.

The increase in Japan’s defense spending, which appears to be on track to double to 2% of the country’s gross domestic product within the next five years, is something that is more certain to occur.

It appears that an arms race may break out in East Asia.

According to Su Tzu-yun, a research fellow and director at the Institute of National Defense and Security Research in Taiwan, “This military competition is a two-way street. In a way, everyone will worry that your safety is my threat; it is a safety dilemma (and) will lead to an escalation of competition.”

“However, history teaches us that if peace is what you seek, you must be prepared for battle.”