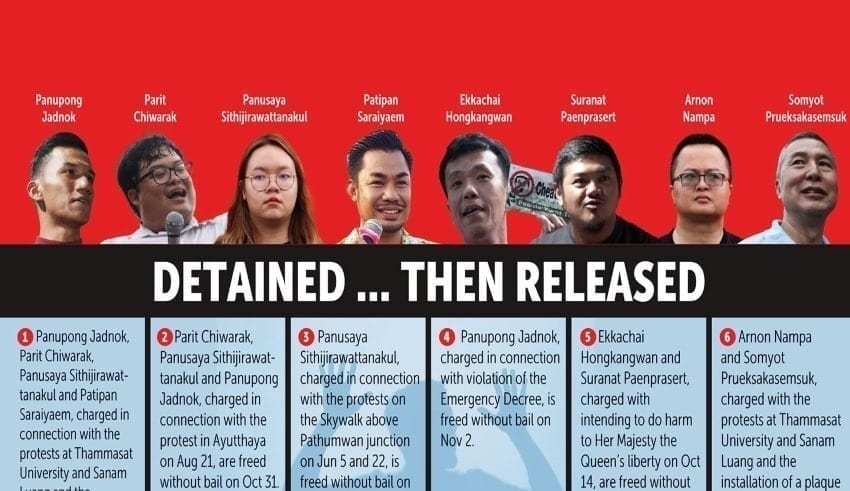 The Office of the Judiciary insisted that it behaved in compliance with proper protocols, after four anti-government leaders were released.
(C) Bangkok Post

The Office of the Judiciary insisted that it behaved in compliance with proper protocols, after four anti-government leaders were released.  Suriyan Hongwilai, the judicial spokesperson, said the lawsuits had not yet entered the justice system, so his decision to turn down a police order to apprehend opposition leaders for a third time was in accordance with universal legal norms.

It was now up to the police if the four leaders could be charged, Mr. Suriyan stated and adding that the court was just asked to investigate how the police had exercised their jurisdiction in the event. On the other hand, Ekkachai Hongkangwan and Suranat Paenprasert, charged on 14th of October with attempting to injure the rights of Her Majesty the Queen, were released without bail. So were Arnon Nampa and Somyot Prueksakasemsuk, charged with the Thammasat University and Sanam Luang protests and the construction of a plaque on 19-20 September.

For this reason, Atthapol Buapat (aka Kru Yai Khon Kaen Por Gun Tee), Chai-amorn Kaewwiboonpan (aka Ammy The Bottom Blues), Suwant to Tarnlek, eight other demonstrators, and Sasinan Thamnithinan, a lawyer from Thai Human Rights Lawyers, met with police officers at Chana Songkhram Police Station yesterday after being summoned to admit charges filed against them for leading the Thammasat University protests.

In view of this, Mr. Atthapol said he had another arrest warrant for the Pathumwan police station as well. He maintained, however, that he did not want to escape and there was no reason for the authorities to apprehend him.

If, considering his intention to turn up to accept his allegations, he was convicted, that would mean everyone had not played equally. Last week, Parliament ‘s extraordinary two-day session was held primarily to whitewash the actions of the government and accuse the people. In its declared goal of seeking to resolve the current crisis, he said the government had not been serious and he promised that the demonstrations would not be scaled down.

A total of 17 protesters were summoned by the police, Ms. Sasinan said, and 11 of them had already admitted their charges at the Chana Songkhram Police Station, following which they were permitted to go home.

Prakairat Tonthirawong, a member of the National Human Rights Commission voiced concern about the arrests of protest leaders, especially those who were still minors and who were detained by plain-clothed police officers at night.

Morever, they cited Thailand’s ratified International Covenant on Civil and Human Rights, saying arrests relating to political demonstrations must be reasonable, equitable and predictable in compliance with legal processes. The government shall uphold the 2560 Constitution ‘s rights.