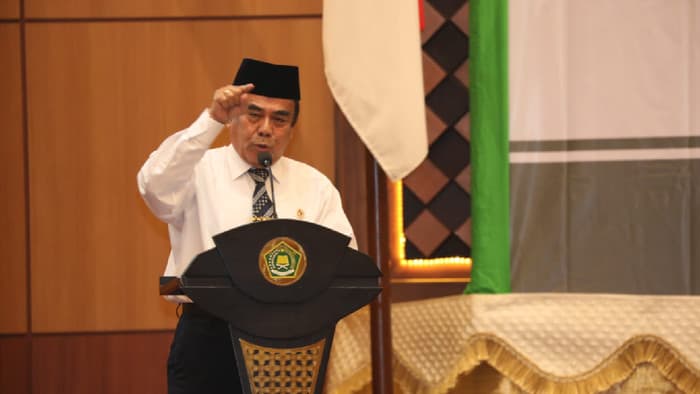 The Minister of Religious Affairs Fachrul Razi said the government required the organizers of Umrah pilgrimage (PPIU) to deposit a minimum security deposit of Rp200 million. This rule is to anticipate that cases of Umrah fraud such as that of First Travel is not repeated.

“The regulation stipulates that organizers of Umrah pilgrimage (PPIU) must have the financial capacity to hold Umrah pilgrimage as evidenced by a bank guarantee of a minimum of IDR 200 million,” Fachrul Razi said at a press conference at the Ministry of Religion Office, Jakarta, Tuesday (18/2).

On the occasion, Fachrul also emphasized that in order to prevent this from happening again, his party had formed a task force for Umrah supervision. This cross-ministerial / institutional task force has intensively taken to the field at the end of 2019.

“To conduct a sudden inspection as well as coaching to travel in several provinces related to Law No. 8 of 2019 on Organizing Hajj and Umrah,” he said.

According to him, the Ministry of Religion also developed an online licensing system through Siskopatuh (Computerized System for Integrated Management of Umrah and Hajj specifically). This application is a means to take care of licensing online so that it will facilitate the community.

There are three types of permits, namely: a new Umrah Worship Tour Operator (PPIU) permit, amendment of the permit, and PPIU accreditation.

“Revocation of this moratorium will provide space for the development of the sharia business world so that it is expected to contribute to national economic growth,” said Fachrul.

It is known, the case of Umrah First Travel travel agency fraud was revealed in 2018. This case resulted in losses of up to Rp905.3 billion.

The money is the accumulated funds deposited by prospective pilgrims of Rp. 14.3 million per person. While the number of victims of fraud reached 63,310 people.

Not only First Travel, Umrah Abu Tours travel agent also committed fraud. It is estimated that the amount of losses due to fraud reached Rp1.8 trillion. Based on police investigation, about 86,720 victims of Abu Tours.