The Asian Affairs > Politics > The Saga Continues: A Wave of Rallies are Expected for the Next Months 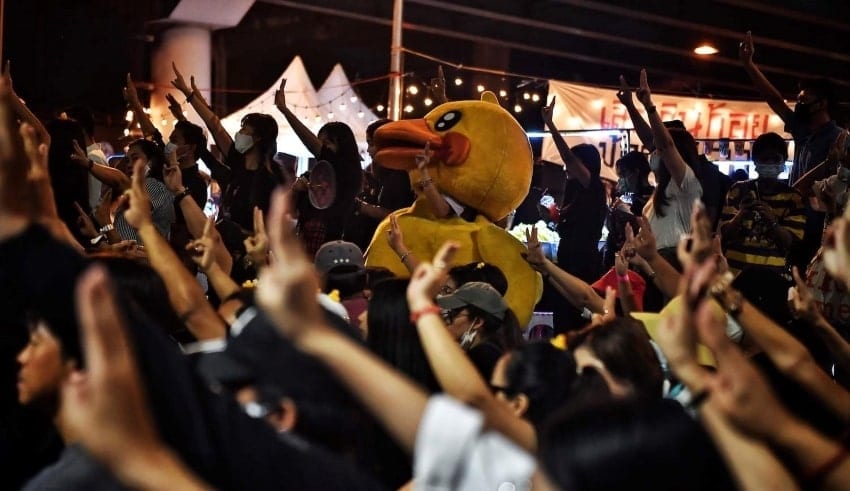 The Police have prepared to deal with anti-government demonstrations in Bangkok and Samut Prakan, which kicked off recently, for three consecutive days.
(C) Bangkok post

The Police have prepared to deal with anti-government demonstrations in Bangkok and Samut Prakan, which kicked off recently, for three consecutive days. In view of this, Pol Maj Gen Piya Tawichai, Metropolitan Police Bureau Deputy Commissioner, said the anti-government movement began its rally at the Lat Phrao intersection on Phahon Yothin Road.

The group had declared it would hold a protest in front of the Imperial World Samrong shopping mall on Saturday and march to the intersection of Bang Na.

In view of this, Pol Maj Gen Piya said the protest group would hold another rally in front of the shopping mall, adding that the protest leaders had not sought permission to hold the protests. During the rallies, about 450 crowd control police officers would be assigned to preserve order. In response to criticism by 13 international organisations over the government’s handling of the protest outside parliament on 17th of November.

Consequently, Amnesty International, Human Rights Watch, Asia Democracy Network, and the Asian Human Rights and Development Forum are among the 13. Tanee Sangrat, the ministry’s spokesman, shared that Thailand had followed the rule of law and transparently supported the judicial process.

The authorities have applied the law in compliance with international standards when dealing with recent demonstrations, offering an adequate response to the situation. He added that those who want to exercise their right of assembly must comply with the law and consider the protection of others, adding that doing so would comply with Thailand’s complete adherence to the International Covenant on Civil and Political Rights.  He also shared that the protesters broke through barricades on Nov 17 and tried to enter an off-limits area, prompting the police to take action to contain the situation. The action was proportional to the situation and was not excessive.

Undeniably, talk of a coup has been rife. It does not happen. But history tells us that we can’t have confidence. Therefore, for a drill to cope with another potential coup, everybody is welcome,

In the meantime, opposition leaders and lawyers for rights are suing Prime Minister Prayut Chan-o-cha, Deputy Prime Minister Prawit Wongsuwon and others for 3.5 million baht in damages over last month’s Bangkok declaration of a significant state of emergency.