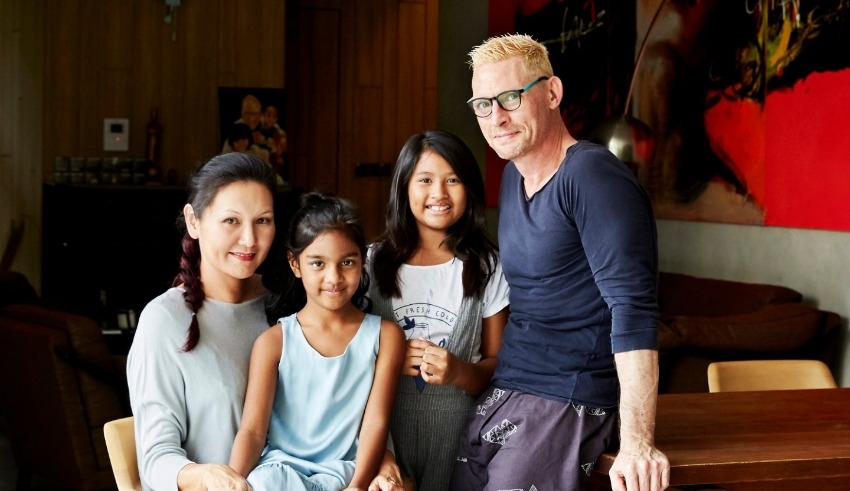 Stroobant was personally moved by a comment that Oliver made in the documentary that he created about Oliver's The Jamie's School Dinners thus inspiring him.
(c) Options-The Edge

Emmanuel Stroobant witnessed one of his daughters being given chicken nuggets and ketchup as a snack when she was attending the preschool that the family attended.

I inquired of the instructor, “’Where are the vegetables?’ Then she pointed to the ketchup and said, ‘There’s tomato in there,'” Stroobant recalled with a sardonic smile on his lips as he recalled the conversation.

It got the chef-owner behind the Emmanuel Stroobant Group, which includes the French restaurant Saint Pierre with two Michelin stars and the edomae sushiya Shoukouwa, thinking about what he could do to improve the quality of school meals. The Emmanuel Stroobant Group includes Saint Pierre and Shoukouwa. It was only by chance that he met a representative from the Stamford American International School in 2012, but that meeting led to him being given the responsibility of running the school’s cafeteria. Over the course of four years, he collaborated with the school to not only provide pupils with healthy meals but also devise innovative and exciting ways to pique their interest in the foods they were consuming.

Stroobant went on pause in 2016 so that he could concentrate on running his restaurants. In the previous year, he made the decision to engage in the school food business once more and established Mycelium Catering as an institutional catering branch. Since August 2021, it has been in charge of the canteen at the international school XCL World Academy, and it was only recently given the responsibility of administering the canteen at Dover Court International School in August 2022. Mycelium is also in charge of the canteen operations at EHL Campus (Singapore), which is the Asia Pacific division of the hospitality educational institution Ecole hoteliere de Lausanne, which is headquartered in Switzerland.

It is not a new trend for celebrity chefs to advocate for healthier school meals. In 2005, Jamie Oliver, a British chef, began lobbying for improved nutrition for children attending schools in the United Kingdom. Stroobant was personally moved by a comment that Oliver made in the documentary that he created about Jamie Oliver’s The Jamie’s School Dinners.

“The ‘aha’ moment was when he remarked that people aren’t cooking at home anymore,” he related to me after the conversation. This is especially the case in Singapore. While the children are occupied with mobile phone games on their devices, we dine in front of the television or next to a computer while our assistants are sent down the road to “pack” the meal. The connection between those of us sitting at the table is broken. It’s not about the meal so much as it is about a recipe being handed down from generation to generation and a family spending quality time together.

The menu of XCL World Academy features a rotating selection of Asian, Western, and vegetarian dishes, and it changes on a regular basis. Meals that do not include eggs, dairy, or gluten are available for children who have food allergies; these dishes are made in a section of the kitchen that has been set aside just for them and is outfitted with specialized equipment to prevent cross-contamination.

Would a chef who specializes in exquisite dining want to avoid fast food? The answer, thankfully, is no in the instance of Stroobant, whose kids are now 10 and 13 years old and are attending a local school and an international school, respectively. He stated, “As long as I know where the products originate from, I have no problem offering (pizzas and burgers) to the kids.” The burgers are cooked from slices of sirloin that are minced right here in the kitchen, and they are served with sauces that are also scratch-made. In order to induce children to readily consume vegetables, they are often disguised as other foods, such as patties, mashed potatoes, or lasagna, before being served to them. He takes care to ensure that each dish has an appetizing appearance and aroma, and he feeds the employees at Mycelium the exact same meals that they serve the children.

According to what Stroobant shared, “We aim to give the children homemade meals that are balanced and cooked every day. Initially, I had a lot of ambition; I wanted to make the restaurant organic and serve at least 75% veggies. However, I soon realized that we are dealing with younger clients who are more open to compromise. There is a lot that can be taught to kids through food, but we still need to give them something that is familiar to them and that they appreciate. The very last thing you want is for people to try it once and then toss it aside.”

Stroobant sees an opportunity to introduce children to a wide variety of food in a way that is both delectable and informative due to the fact that there are more than 20 countries represented among the more than 800 pupils and teachers at XCL. The menu features a wide variety of dishes, such as chicken stew with carrots and macaroni, stir-fry kway teow with vegetable gyoza, and lamb rendang served over biryani rice.

Formerly, the three- and four-year-old students at the Stamford American International School ate their meals in their classrooms in a communal setting. During these meals, they learned how to prepare the table appropriately for the cuisine being served and how to serve the food. Now that the safe-distance limits have been relaxed, Stroobant intends to have a conversation with the two schools on how to start up this activity once more. He was so enthused that he couldn’t help but exclaim, “It’s great to observe the relationship amongst the tiny ones as they learn about the food in each other’s culture.”

On the day when CNA Luxury visited XCL for a behind-the-scenes peek at its canteen operations, the food that was served included fish fritters with coleslaw and potato mash, vegetarian lasagna, and Japanese curry chicken katsu don. The chicken katsu and fish fritters were both fried to a golden crisp, and the curry had a savory flavor without the overpowering sensation of being overly salted. Even the potato mash had a velvety texture and a delicious flavor. Everything is made from scratch at the location, and instead of scooping food from the traditional bain-marie food warmers, it is served in individual servings that have been individually wrapped. It is the goal of each waiter to fulfill each order within fifteen seconds, regardless of whether the student has pre-ordered the food or is purchasing it at that moment.

Aside from that, Mycelium is also responsible for organizing five-day Star-Chef Academy culinary camps for XCL students between the ages of seven and sixteen. During these camps, participants learn how to properly handle kitchen equipment, the history and culture of food, as well as table etiquette, all while preparing snacks, meals, and desserts.

Stroobant is not in a hurry to expand his business; instead, he prefers to concentrate on one school at a time in order to ensure that the business is running smoothly before moving on to the next one.
He stated, “It’s okay if I can’t transform every meal; my duty is to plant seeds. My profession has flourished here in Singapore, so I feel the need to give back, and I believe that helping children is a good way to do so. I’ve been in Singapore for the past 23 years. If I can have an effect on even a few others, I will be able to go to bed happy.”