The Asian Affairs > Latest News > Indonesia > Villagers in Kalimantan, Indonesia, use outdated floating toilets to get by 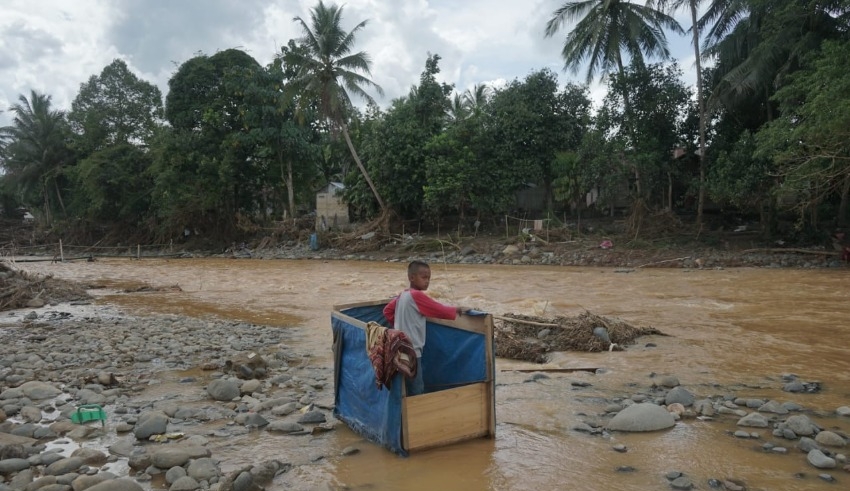 In the region of Kalimantan in Indonesia, there are around 150 rivers and thousands of latrines. The residents of the area refer to them as "floating toilets."
(c) Dompet Dhuafa

When Ramjaena needs to use the restroom, she always looks around to see whether there is anyone else in the neighborhood before going inside.

Her home, like those of the majority of people who live in the Paku Alam settlement, which is located on a tributary of the Martapura river, is built on stilts and is placed beside the waterway.

In front of her house is a short boardwalk made of wood that leads to a hardwood outhouse that is only 1.5 square meters in size and is likewise constructed on stilts.

When she or other members of her family need to use the latrine, a piece of cloth serves as a makeshift door in place of a permanent one so that they can maintain their privacy. Their waste is disposed of by throwing it straight into the river.

In the region of South Kalimantan in Indonesia, there are around 150 rivers and thousands of latrines just like this one. The residents of the area commonly refer to them as “floating toilets.”

They ultimately end up poisoning the water, which is the lifeblood of the locals, which is an issue in the region that is home to more than 4 million people.

When they are forced to answer the call of nature in such a manner, Ramjaena and the other villagers have informed CNA that it makes them feel uncomfortable. Their top priority is to have access to clean restrooms.

The government has been urged to investigate the issue by environmental activists.

However, saying something is easier than doing it, and despite the fact that there have been various programs designed to eradicate these floating latrines, a significant number of them are still in use.

According to Kisworo Dwi Cahyono, the executive director of the non-governmental organization (NGO) Walhi South Kalimantan, South Kalimantan and its old capital of Banjarmasin have always been known for their extensive network of rivers and tributaries throughout the region’s history.

“What this indicates is that historically and culturally, humans have not lived too far away from rivers…” According to Cahyono, it is common practice for the communities to carry out their daily routines in the river. These activities include bathing, peeing, and defecating, as well as commuting (by boat).

According to Hanifah Dwi Nirwana, the head of the provincial environment office in South Kalimantan, the majority of people who live near the rivers in that province have come to rely on floating toilets over the course of the years.

She stated that the municipal authority does not have an accurate count of the number of households in this category.

According to Nirwana, “it is an old custom for people to live along the river… They have restricted access to clean water if they live on land. People have a habit of living near rivers since it is convenient for them.”

She went on to say that this practice is ingrained in the culture of South Kalimantan, where it is customary for residents to mix and mingle with their neighbors while washing their clothes in the local rivers.

This style of life is most noticeable in the early morning hours in Banjarmasin, when residents bathe along the Martapura river or row to the famed floating market Lok Baintan, which is a prominent tourist destination in the city.

However, residents of the area who were questioned by CNA stated that the phenomena is not solely attributable to the traditional way of life that is prevalent there.

According to Ramjaena of Paku Alam, the primary reason why she has been using a floating toilet is because she has been having trouble making ends meet.

She explained that the reason her bathroom was set up in such a manner was because she lacked the financial resources necessary to construct a suitable toilet inside the house.

As farmers with four children, she and her husband do not have the financial means to purchase it.

Idup, who also resides in Paku Alam, disclosed to CNA that the only type of toilet he can buy is a floating model.

The farmer, who was in his 70s, was quoted as saying, “When I want to utilize it, I wait until the surrounding is calm.” He only goes by one name, much like the majority of other Indonesians.

Some households are even forced to take turns using the same portable toilet.

One of the people that are a part of this group is the leader of the community, Abdus Samad. Because we are short on funds, we have to take turns using the restroom. As a result, we pooled our resources and raised funds in order to construct a communal bathroom.

According to Cahyono, an environmentalist, in the past there were probably not enough floating toilets for it to be deemed a concern because there were so few of them.

On the other hand, as South Kalimantan’s population increased, the number of floating latrines also increased.

According to research conducted by the provincial government, the water in the river has high concentrations of bacteria such as Escherichia coli (E. coli). E. coli is a type of faecal coliform that is frequently discovered in the intestines of animals and humans, and it is capable of causing illness in both species.

She mentioned that there are a lot of different parameters to evaluate how clean the water is, such as the amount of dissolved oxygen.

It is impossible for the fish to have a healthy life if there is a low concentration of dissolved oxygen. When we went fishing in the river in the past, it was not difficult to reel in large fish or prawns of a similar size. However, things have recently gotten more difficult.

Nirwana concluded that there was disruption to the ecology.

She went on to say that the organization is working toward achieving the targets of the United Nations 2030 Sustainable Development Goals, one of which is to improve access to clean water and sanitation.