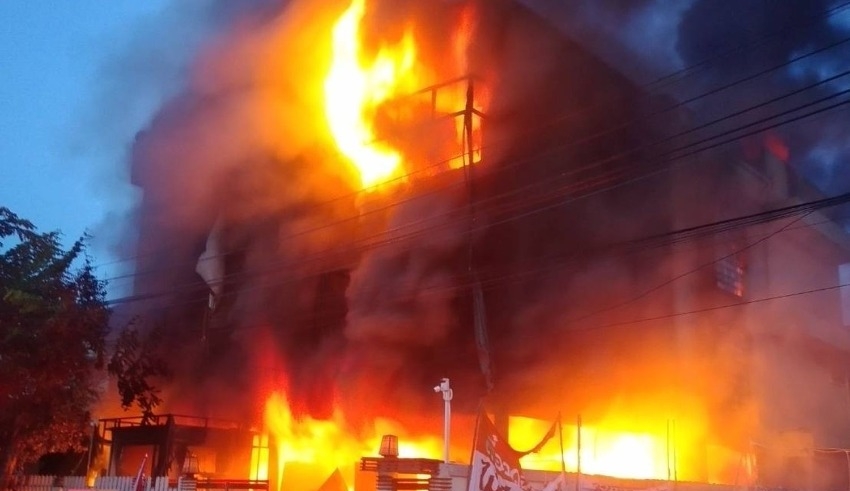 The blaze started at one in the morning at the Mountain B nightspot in the Sattahip district of Chonburi, which is around 150 kilometers southeast of Bangkok.
(c) Bangkok Post

At least 14 people were killed after a major fire tore through a nightclub in Thailand on Friday (August 5), prompting the country’s Prime Minister to launch an investigation into the cause of the disaster.

The blaze started at one in the morning at the Mountain B nightspot in the Sattahip district of Chonburi province, which is around 150 kilometers southeast of Bangkok.

A rescue organization uploaded video footage to their website that showed terrified clubgoers fleeing the building while screaming and setting their garments on fire while a massive fire raged in the backdrop.

Chalit Chotisupakarn, who managed to get out of the building despite suffering burns to his arms and torso, described scenes of panic and desperation as people fought to exit the structure.

“I was unable to see anything because the room was so dim. Everyone was yelling, “Get out of here!” So I did. Get out!’ We were all required to make an effort to escape,” he explained to the press.

According to reports from the Sawang Rojanathammasathan Rescue Foundation, there were 14 fatalities and approximately 40 injuries.

The fire service reported that flammable acoustic foam on the walls of the club contributed to the rapid spread of the fire, and it took firemen more than three hours to get the blaze under control.

The Prime Minister of Thailand, Prayut Chan-o-cha, sent his sympathies to the victims’ families and announced that an investigation into the cause of the incident would be launched.

According to the agency, the remains of the fourteen victims, including four women and ten males, had suffered serious burns and were found largely gathered near the door and in the bathroom.

They ranged in age from 17 to 49, and it is thought that every single one of them was Thai.

Boonsong Yingyong, a police lieutenant colonel at the Phlu Ta Luang police station, which controls the region where the fire occurred and spoke with AFP by phone, stated that there is “no mortality due to foreigners.”

According to statements made by the victim’s mother to the local media, one of the victims was the lead singer of the band that was performing at the club.

“I am speechless and at a loss for words. The death occurred without any prior warning,” Premjai Sae-Oung revealed this information to the press.

She stated that a friend who was a musician and who had escaped the building told her that the fire had started in front of the band and spread quickly.

Images of the aftermath demonstrated how the fire had rendered the interior of the club a charred shambles, with the charred metal frames of furniture strewn about among the ashes.

In light of the fact that this building only has one floor, the authorities are looking into whether or not it has any means of egress in the event of a fire, and engineers are currently assessing the building.

According to the minister of the interior, Anupong Paochinda, who was speaking to the media, it appeared that the Mountain B was operating as an entertainment venue “without license.”

According to Sompong Chingduang, an assistant commissioner for the Royal Thai Police, an inquiry has been opened into the proprietor for allegedly converting the location from a restaurant to a nightclub without first obtaining permission.

Concerns have been expressed for a long time about the loose attitude that Thailand takes to the standards governing health and safety, particularly in the country’s innumerable pubs and nightclubs.

At a New Year’s Eve party held in Bangkok’s ritzy Santika club in 2009, a catastrophic fire broke out, resulting in the deaths of 67 people and injuries to more than 200 more.

The proprietor of Santika, who was responsible for the fire that broke out while a rock band called Burn was performing on stage, was sentenced to three years in prison for his role in the incident.

More recently, in 2012, an electrical malfunction triggered a fire at a club on the vacation island of Phuket, which is a popular destination for visitors from other countries. Four people were murdered in the blaze.