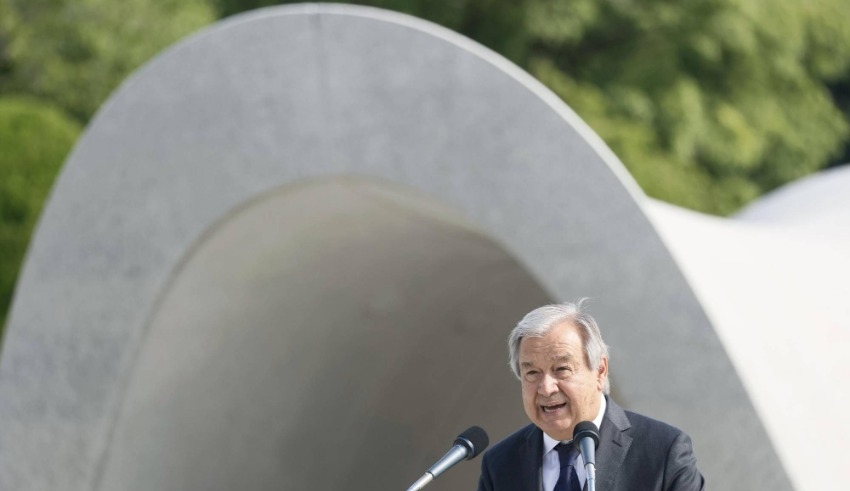 Antonio Guterres, the Secretary-General of the United Nations, delivered a speech in Hiroshima, Japan. He said, "Humanity is playing with a loaded gun."
(c) The Japan Times

On the occasion of the 77th anniversary of the first use of an atomic bomb, which took place on August 6, Antonio Guterres, the Secretary-General of the United Nations, delivered a speech in Hiroshima, Japan. He said, “Humanity is playing with a loaded gun” as crises with the potential for nuclear disaster proliferate worldwide.

While describing the atrocities that were suffered by the Japanese city, Guterres delivered a speech at an annual commemoration in which he warned of the danger posed by problems in Ukraine, the Middle East, and the Korean peninsula.

“In the blink of an eye, this city became the scene of the deaths of tens of thousands of people. A horrific inferno was responsible for the deaths of men, women, and children,” he stated.

Cancer and other health issues were “a radioactive legacy” that survivors were “cursed with” as a result of the disaster.

The question that needs to be asked is, “What have we learnt from the mushroom cloud that grew above this city?”

When the United States dropped an atomic bomb on Hiroshima on August 6, 1945, it resulted in the deaths of around 140,000 individuals. This figure accounts for those who passed away as a result of radiation exposure following the explosion.

Today, “crises with grave nuclear undertones are spreading fast – the Middle East, to the Korean peninsula, to Russia’s invasion of Ukraine,” Guterres said, repeating warnings he made this week at a nuclear Non-Proliferation Treaty conference in New York City. He was speaking specifically about the Middle East, the Korean peninsula, and Russia’s invasion of Ukraine.

“Humanity is playing with a pistol that’s already been loaded.”

In the early hours of the morning, survivors and members of their families began to congregate at the Peace Memorial Park in Hiroshima to lay flowers and say prayers.

At 8:15 in the morning, the bomb was dropped, and during that time a prayer was said in silence.

Although he was not invited to the ceremony, the Russian envoy paid a visit to Hiroshima on Thursday in order to leave flowers at the memorial site.

Since Russia invaded Ukraine in February, Vladimir Putin, the President of Russia, has made threats that are only thinly veiled, but they hint at a willingness to deploy nuclear weapons for tactical purposes.

Leo Tolstoy, the Russian author of “War and Peace,” was highlighted by the Mayor of Hiroshima, Kazumi Matsui, during her statement on Saturday. Matsui quoted Tolstoy as stating, “Never construct your happiness on the tragedy of others, for it is only in their pleasure that you can find your own.”

Three days after the bombing of Hiroshima, the United States detonated a plutonium bomb on the Japanese port city of Nagasaki. This resulted in the deaths of around 74,000 people and ultimately led to the conclusion of World War II.

The United States of America is the only nation in the history of the world to have ever employed nuclear weapons in an armed conflict.

According to the head of the United Nations, however, there are currently roughly 13,000 held in state arsenals across the world.

The visit that Guterres had planned to make to the Hiroshima monument the previous year, but had to be postponed due to the COVID-19 outbreak, took place for the very first time on Saturday.