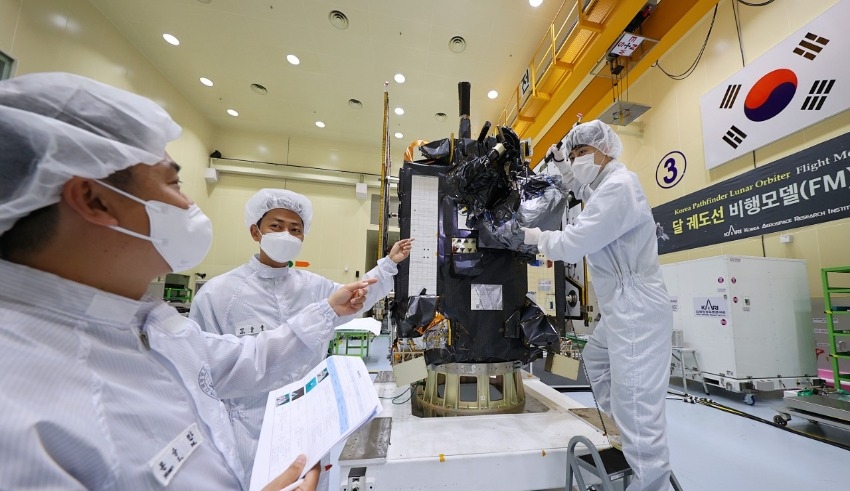 After an unsuccessful attempt in October of last year, the nation successfully launched its first space rocket that was developed entirely within its borders.
(c) The Korea Herald

Live video captured the launch of South Korea’s first-ever lunar orbiter, which took place from the United States on Thursday (August 4). The mission will last for one year and will consist of observing the Moon. The cargo will include a novel disruption-tolerant network for sending data from space.

Elon Musk’s aerospace business SpaceX transported the Danuri spacecraft, whose name is a mashup of the Korean words for “Moon” and “enjoy,” aboard a Falcon 9 rocket that was launched from Cape Canaveral in Florida. It is scheduled to arrive on the Moon in the middle of December.

In a video that was played before the launch, Lee Sang-ryool, president of the Korea Aerospace Research Institute, remarked that “this is a very significant milestone in the history of Korean space exploration.”

“Danuri is just the beginning, and if we are more dedicated and committed to the development of technology for space travel, we will be able to visit Mars, asteroids, and other locations in the solar system in the not too distant future.”

During the course of the mission, which will last for a whole year, the Danuri spacecraft will make use of six distinct instruments, one of which will be a highly sensitive camera provided by NASA. This camera will be used to conduct research, which will include investigating the lunar surface in order to locate possible landing sites for future missions.

According to South Korea’s scientific ministry, one of the instruments will analyze disruption-tolerant, network-based space communications. This will be a first of its kind experiment anywhere in the globe.

They went on to say that Danuri will also work on creating a wireless Internet environment with the goal of linking satellites or exploration missions.

This wireless network will be evaluated using the K-pop sensation BTS’s song “Dynamite,” which will be streamed via the lunar orbiter.

Danuri, which took seven years to build, is credited by South Korean experts as being the vehicle that will pave the way for the nation’s more ambitious objective of laying foot on the Moon by the year 2030.

“It is a monumental occasion for South Korea’s space development program, and we are hopeful that what Danuri is going to discover about the Moon will continue to contribute to a better understanding of the Moon on a worldwide scale.”

After an unsuccessful attempt in October of last year, the nation successfully launched its first space rocket that was developed entirely within its borders in June.

The creation of the three-stage rocket known as the Nuri took ten years and cost two trillion won, which is equivalent to $1.5 billion USD.