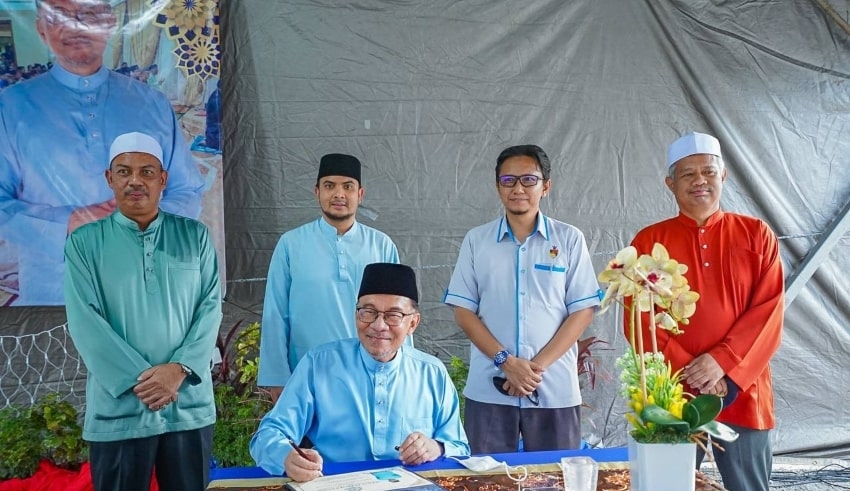 PKR president Datuk Seri Anwar Ibrahim has remarked that he is willing to challenge former Prime Minister Datuk Seri Najib Razak over the financially ailing Sapura Energy Berhad, but that the discussion should be open for the media to cover and open to public watching.
(C) Anwar Ibrahim / Twitter

Malaysia – PKR president Datuk Seri Anwar Ibrahim has remarked that he is willing to challenge former Prime Minister Datuk Seri Najib Razak over the financially ailing Sapura Energy Berhad, but that the discussion should be open for the media to cover and open to public watching.

Anwar emphasized the importance of media freedom in a Facebook post late Friday night, adding that Najib had limited the debate to one news source.

“Media participation should be broad and not restricted to a single news outlet.” The Port Dickson MP and former deputy prime minister remarked, “Newspaper agencies or mainstream media should participate in efforts to promote a healthy and open culture of wacana (discourse).”

Anwar stated in a video linked to the Facebook post that Najib asked him to a discussion in early Ramadan, the Muslim fasting month, and that he rose to the challenge even though it was Ramadan.

“I answered that it is Ramadan, but because there is already a challenge, I said that I am ready at any moment, under all circumstances.”

Anwar also added that now Najib’s saying it shouldn’t be held during Ramadan, but rather in early Syawal. He simply set up a little site, to which he answered that any medium, whether Sinar Harian, TV3, or RTM, must be accessible, and that media freedom must not be restricted so that the people can review.

“As a result, I’m hoping Najib doesn’t go berdolak-dalik.  He challenged, I responded, and God willing, we’ll meet,” Anwar said in the video, referring to the Malay phrase for “flip-flop.”

On his Facebook page this morning, Najib claimed that Anwar had accused him of being the one who had thrown out a challenge to debate during Ramadan.

Najib said that it began with former PKR MP Rafizi Ramli challenging him to a discussion earlier this month, and that Najib then accepted to a debate with PKR party leader Anwar.

Najib also stated that Anwar’s agent had agreed with Najib’s representative to have the debate after the fasting month, and that PKR was now accusing him of being frightened of debating.

Najib stated that he was not worried at all and promised to discuss with Anwar on the Sapura Energy issue.