The Asian Affairs > Latest News > Geo Politics > COP27: Biden highlights climate crisis is about the “very life of the planet” 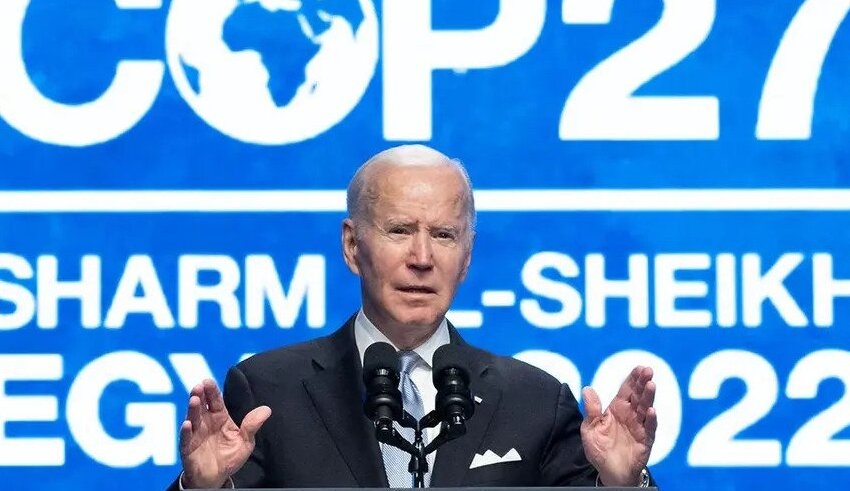 Despite billions of dollars in damage from natural disasters, the UN reported last week that global emissions will rise 10.6% by 2030 compared to 2010 levels.
(c) The Guardian

On Friday, November 11, US President Joe Biden addressed the COP27 climate summit in Egypt, stating that the global climate issue constituted an existential threat to the Earth and committing to do his bit to tackle it.

“The climate problem is about human security, economic security, environmental security, national security, and the very life of the planet,” said President Joe Biden before outlining the efforts the United States, the world’s second-largest producer of greenhouse gases, was taking.

“As president of the United States of America, I can confidently assert that we will meet our 2030 emissions goals,” he stated.

The purpose of his address was to remind government representatives assembled in Sharm el-Sheikh to maintain a target of limiting the global average temperature rise to 1.5 degrees Celsius in order to prevent the worst effects of global warming. It occurred at a time when a multitude of issues – ranging from a land war in Europe to soaring inflation – diverted international attention.

“In light of this, it is more important than ever that we increase our climate pledges. Russia’s war merely heightens the necessity of eliminating the world’s reliance on fossil resources,” he said.

Prior to his visit, Biden’s administration attempted to set the stage by announcing a domestic plan to severely restrict the US oil and gas industry’s emissions of methane, one of the most potent greenhouse gases, despite months of lobbying by drillers.

Washington and the European Union planned to make a joint statement on oil industry methane on Friday, expanding on an international agreement initiated last year and subsequently joined by 119 governments to reduce economy-wide emissions by 30% by the end of the decade.

US confirms Biden-Xi meeting in Indonesia next week

The announcements are met with doubt that global governments are doing enough to combat global warming.

A report released by the United Nations last week indicated that global emissions are projected to increase by 10.6% by 2030 compared to 2010 levels, despite the fact that destructive storms, droughts, wildfires, and floods are already causing billions of dollars in damage worldwide.

To limit global warming to 1.5 degrees Celsius (2.7 degrees Fahrenheit) above pre-industrial temperatures as envisioned by the Paris Agreement of 2015 — the threshold above which climate change risks begin to spiral out of control — emissions must decrease by 43% by that time, according to scientists.

Numerous nations, notably the United States and members of the European Union, have called for an immediate increase in the supply of fossil fuels to assist in bringing down consumer energy prices, which have soared since Russia’s invasion of Ukraine.

Human rights activists have attacked UN organizers for conducting COP27 in Egypt, whose government has been accused of human rights violations since the 2013 military takeover of its first democratically elected president.

President Abdel Fattah al-Sisi informed US President Joe Biden upon his arrival that Egypt has begun a national plan for human rights and is eager to advance in this area.