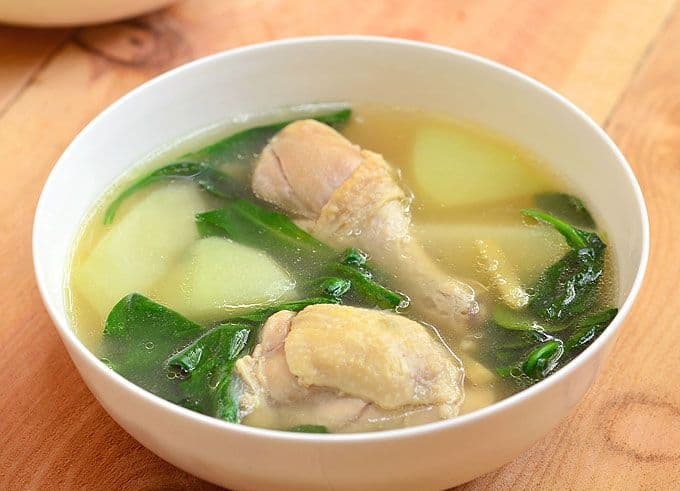 Typically eating a hot bowl of soup will immediately make one feel better when people feel sick. The temperature warms up the inside just fine, and the soup itself is full of quickly swallowed and digested nutrients. For filipinos, chicken soup or the famous tinola with vegetables off their plate but slurp the soup, they can be certain that they eat something nutritious about it.

Chicken soup have great health benefits. It may be a basic dish but it has excellent value for both quality and taste.

Doc Jimmy, the former Health Secretary who practices integrative medicine and blends North American and Western medicine with the best of traditional Asian and Filipino medicine, had this to say: Chicken is considered a “yang” food in traditional Chinese medicine, based on the principle of yin / yang, where yang is hot and yin is cold. Yin and yang energies must be in a state of equilibrium for one to be in good health. Whether you have cold, cough or flu, food known as yang has a warming effect on the body and is good for respiratory diseases.

This is the reason why the affliction itself is called “cold,” adding the drying effect of chicken soups. It dries the mucous in our breathing passages and COVID-19 is primarily a respiratory disorder which can be connected to this kind of ailment.

Chicken contains cysteine, an amino acid needed for glutathione synthesis, a strong antioxidant. Obviously, cysteine itself treats respiratory illnesses, fever, and inflammation. When chicken broth is made with plenty of onions and other vegetables such as celery, carrots and garlic, the beneficial effect on the healing of upper respiratory tract infections triples.

Onions contain allicin, and the volatile oil contains sulfur compounds that prevent viral infections. Onions liquefy the phlegm and have been used to treat cough, colds, influenza and bronchitis for decades.

In fact in a recent happenings in Valenzuela, Mayor Rex Gatchalian of Valenzuela City ordered a few cocks (stop snickering!) to be cooked on Sunday after they were confiscated from an illegal cockfighting derby in Karuhatan village.

About a dozen suspects were arrested the same day after being caught breaking lockdown laws by assembling for the illegal derby en masse (also cockfighting isn’t really an necessary operation, is it?). The offenders arrested will be charged with violating strengthened collective quarantine laws and with illegal cockfighting.

Instead of putting the chickens into waste, they turned it to “tinola” which is most loved by filipinos to eat.