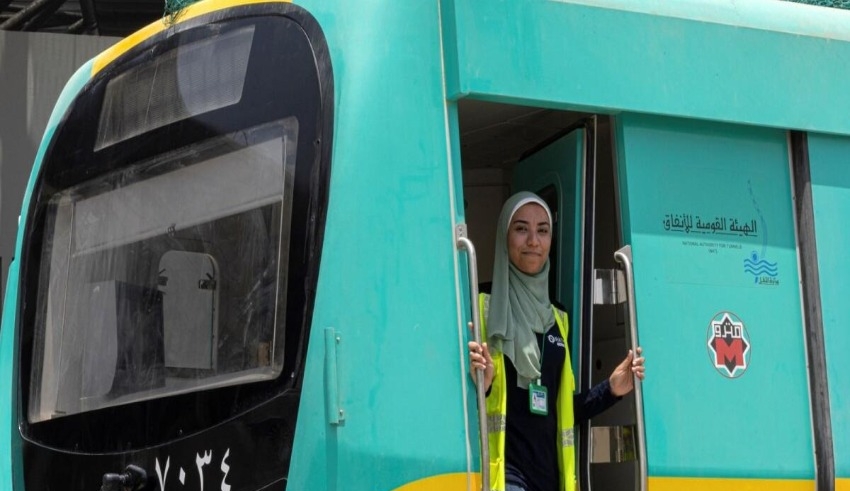 Egypt's first female train drivers have been hired and trained by the Cairo metro as it prepares to expand to serve a population that now exceeds 20 million.
(c) Khaleej Times

A rarity in a nation where few women hold formal professions, Egypt’s first female train drivers have been hired by the Cairo metro as it prepares to expand to serve a population that now exceeds 20 million. This is a novelty in a country where few women hold regular jobs.

According to the two pioneers, passengers on the network’s newest line have seen women seize the controls in the driver’s cab since April, and the reactions have ranged from raised eyebrows to open rejection.

Since 1956, Egyptian women have been granted the ability to vote and to run for public office; yet, patriarchal legislation and a culture that is predominately male have severely restricted other personal liberties.

In an effort to shield women from the risk of being subjected to sexual harassment, the metro system in Cairo has allocated carriages for female passengers who do not desire to travel with male passengers.

“I have several thousand lives in my hands every day,” the 30-year-old woman proudly told AFP while wearing a fluorescent jacket emblazoned with the RATP-Dev logo, which is the name of the foreign operations arm of the Paris metro system, beneath her black and white headscarf. “I take that responsibility very seriously,” she added.

Omar admitted that she had been very fortunate to have the support of her family throughout her life.

According to what she claimed, one of the most important aspects had been the decision to exempt female drivers from working night hours.

According to Omar, the examinations that would-be drivers had to take in order to qualify had been extremely difficult and required candidates to demonstrate both their “attention span” and their “endurance.”

During a six-day work week, she stated that drivers were required to be “very watchful for extended hours” of concentration.

Omar was one of just two women chosen to participate in the training program that was organized by the Egyptian National Authority for Tunnels in collaboration with RATP-Dev.

The second passenger, Suzanne Mohamed, remembered the moment when passengers on the platform first noticed her in the driver’s cab. Mohamed is 32 years old.

In a nation in which women have restricted access to a variety of fields of work, she added that she could see why “they were startled.”

She commented to AFP that “several people were terrified. They indicated they didn’t feel safe with a woman at the controls and that they had doubts about my abilities.”

The Cairo Metro was opened in 1987, making it the oldest in the Arab world; nonetheless, in comparison to other Arab countries, Egypt lags behind in the number of employment opportunities it provides for women.

In 1999, Saida Abad of the Kingdom of Morocco became the first female train driver in all of Africa and the Arab world.

Even in Saudi Arabia, where women were not allowed to operate motor vehicles until very recently, there is now a pioneering class of female students learning how to operate rail vehicles.

Omar expressed the hope that her experience will help “pave the way for more women” to become train drivers and ensure “that there’s a lot of us” in response to the announcement that the Cairo Metro is proposing to build three new lines as well as Egypt’s first monorail system.