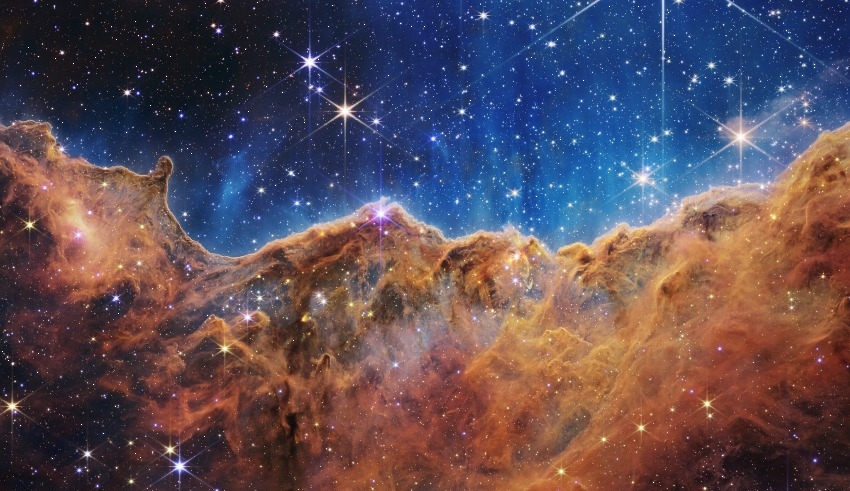 The first photographs from the James Webb Space Telescope were made public. The images demonstrated enormous potential for uncovering the mysteries of the cosmos.
(c) NASA

US: The first photographs from the James Webb Space Telescope were made public by NASA on Tuesday. The images demonstrated the telescope’s enormous potential for uncovering the mysteries of the cosmos. The following are some of the things we’ve learned thus far.

Advanced scientific devices, such as the Hubble Space Telescope, might occasionally fail to perform as expected. The Hubble was repaired numerous times by astronauts, but the Webb, which is much further from Earth than any human has ever traveled, could not be repaired.

Mission scientists had to make sure that all of the telescope’s components were working properly after launching and deploying it, as well as its sun screen.

In a news conference on the telescope on Tuesday, Jane Rigby, the telescope’s operations project scientist, said that they had performed spectacularly.

When the telescope’s first sharp test images arrived at home, “I got the extremely emotional feeling of ‘Oh my goodness, it works,'” she said. “We were really surprised by how well it worked.”

A paper published online on Tuesday but not yet peer-reviewed by hundreds of scientists stated, “The telescope and sensor suite have demonstrated the sensitivity, stability, image quality, and spectrum range that are necessary to alter our understanding of the cosmos.”

In the meantime, the scientists are working on their findings. Webb’s era will be kicked off with the launch of 13 Early Release Science Programs. In addition to the solar system, galaxies and intergalactic space, huge black holes and the galaxies they inhabit, and the evolution of stars are all included in their scope.

According to Dr. Rigby, “the science outcomes will start flowing out from here on in.”

On Monday, NASA officials and scientists praised an image obtained by the Webb telescope as one of the deepest photos ever taken of the cosmos, a mark that will undoubtedly be passed shortly as more data spills out of NASA’s computers.

Further away galaxies might be seen spilling out of a distant star cluster named SMACS 0723. Those galaxies emitted light more than 13 billion years ago, which was amplified by the cluster’s gravitational field and made visible.

The most distant and oldest stars, according to astronomers, may not be like the stars we see today. Hydrogen and helium from the Big Bang formed the first stars, which could grow to enormous sizes before collapsing into supermassive black holes that presently inhabit the centers of most galaxies.

A chart depicting the planet’s path as it passed in front of its star 1,120 light-years away was the most amazing thing to be shown on screens on Tuesday, but the spectra of the Jupiter-sized exoplanet WASP-96b were not. Astronomers at the Space Science Telescope Institute in Baltimore, who operate the Webb telescope, gasped and applauded when they saw it.

It’s an honor to share this information with you, Nestor Espinoza, an astronomer at NASA’s Jet Propulsion Laboratory.

Observations of the planet from the ground and the Hubble Space Telescope had already been made. Water vapor, hazes, and other hitherto unknown clouds were also seen by the Webb telescope. Scientists were shocked by this discovery.

Finding out whether other rocky worlds orbiting other stars are habitable using the same methods as WASP-96b is exceedingly unlikely.

We’ll identify planets that look interesting — like they might harbor life, in the words of University of Arizona astronomer Megan Mansfield. “However, we won’t be able to immediately detect life.”

It has been difficult to investigate these exoplanets until now because of their small size. Astronomers will be able to get a closer look at these worlds thanks to the Webb telescope.

According to Dr. Mansfield, the telescope is “the first huge space observatory to take the study of exoplanet atmospheres into account in its design.”

Trappist-1, a star with many planets in its habitable zone, is one such target. For now, the news will have to be kept a secret, says telescope deputy project scientist for exoplanet science Knicole Colón.

The Southern Ring Nebula, a cloud of gas and dust emitted by a dying star, and Stephan’s Quintet, a cluster of galaxies millions of light-years away, were among the jaw-dropping sights shown during the Webb presentation.

The Carina nebula, a massive, swirling cloud of material that serves as both a star nursery and home to some of the Milky Way’s most bright and explosive stars, was the most spectacular image captured by the Hubble Space Telescope. The nebula looked like an eroding seaside cliff to astronomers looking at it in infrared, and it was littered with hundreds of previously unseen stars.

Amber Straughn, a telescope deputy project scientist, pointed to a craggy structure and remarked, “It took me a bit to figure out what to call out in this image.

Scientists couldn’t explain some of the picture’s strange formations, such a strange, curving feature.

Amaya Moro-Martin, an astronomer at the Space Telescope Science Institute who presented the image to her colleagues on Tuesday, stated, “As usual, there is potential for the unexpected.”

“We have no idea what is going on here.”

Things that have never been seen before and are in need of an explanation can be expected from Webb.

A telescope like the James Webb Space Telescope was bound to have its mirrors splattered with cosmic dust. Even so, NASA officials were taken aback when they discovered that a micrometeoroid attack in late May had damaged one of the telescope’s mirrors and that the impact had been greater than predicted.

Webb’s performance still exceeds all of NASA’s requirements, according to the agency’s officials, who said the distortion was scarcely apparent. Engineers also made adjustments to the damaged mirror’s position in order to eliminate some of the distorted images.

Four smaller micrometeoroids had previously struck the telescope before the incident was reported.

Micrometeorites are a major source of concern for NASA, according to assistant administrator for science missions Thomas Zurbuchen.

According to Dr. Zurbuchen, NASA is looking into flight options to make sure that any dust that does get in contact with the telescope strikes the mirrors from the backside rather than the front.