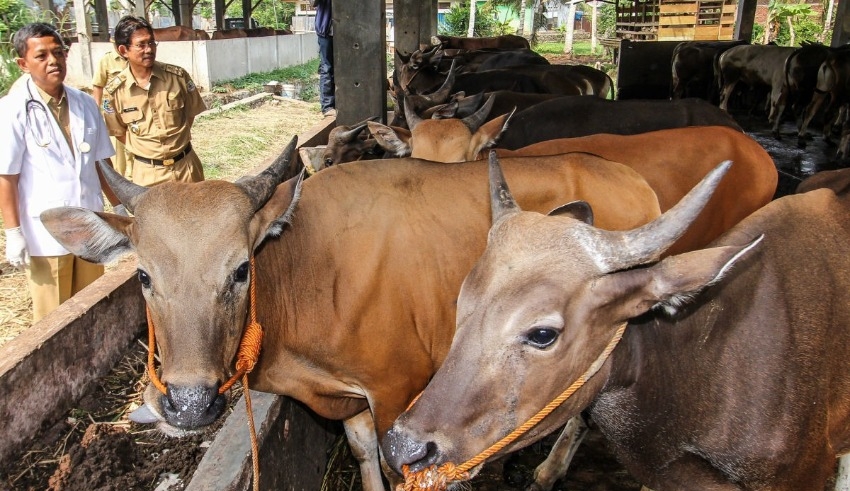 According to Indonesian Agriculture Minister, travelers departing Bali would be subject to disinfection to prevent the spread of the foot-and-mouth disease.
(c) The Bali Sun

BALI: According to Indonesian Agriculture Minister Syahrul Yasin Limpo, travelers departing Bali would be subject to disinfection to prevent the spread of the foot-and-mouth disease (FMD) now afflicting cattle in the country.

Reporters in Jakarta heard Mr Limpo and his Australian counterpart Murray Watt mention that the island of Bali had previously had cases of FMD.

According to him, the outbreak has been confined to Bali and there are no FMD cases in the area today.

By slaughtering afflicted animals, the province was able to keep FMD under control, he said.

To guarantee that Bali remains free from FMD, the government will be disinfecting travellers, said Mr Limpo.

In order to prevent the spread of disease, there will be disinfection gates at Bali’s airport and port.

An entire corridor is dedicated solely to people who wear shoes. As Mr Limpo explained to reporters, the disinfectant on the floor isn’t just there for the Balinese and Australians who use it, but for everybody who walks on it.

He noted that disinfection is also being carried out in other places according to the technical suggestions of specialists, especially at farms.

As of Thursday, more than 360,000 cases of FMD had been reported in 22 of Indonesia’s 34 provinces. More than 2,400 animals have died since the outbreak emerged in late April.

Now that COVID-19 restraints have been removed, travellers from Australia are once again flocking to Bali for the holiday season. This has raised concern in Australia that holidaymakers would bring the virus home, potentially harming the farm business there.

According to Australian media reports earlier this week, the Australian farmers association has asked travellers to buy new footwear after their holiday, so that they would not unwittingly carry the virus into Australia.

Australia is a big beef exporter. The Australian Bureau of Agricultural and Resource Economics and Sciences (ABARES) has assessed the direct economic impact of a major FMD outbreak in Australia at roughly A$80 billion (US$54 billion).

“In other words, this is a life-threatening condition. All of our interests are aligned with Indonesia’s to assist the country in containing the outbreak, which they are already doing,” he said.

A million doses of the FMD vaccine will be provided by Australia, according to him. They should arrive in the beginning of August.

An industrial collaboration program will receive a $500,000 investment from the Australian minister. Indonesian feedlots will be the focus of this instruction on FMD management.

“We will do everything in our power to prevent this pandemic from spreading to Australia. For our own benefit, but also to help our Indonesian friends,” said Mr Watt: “We’d want to provide a hand.”

According to the World Organization for Animal Health, FMD is a highly contagious viral illness that has a substantial economic impact on livestock (WOAH).

Hand, foot, and mouth illness in humans is not the same thing.

Animals with cloven-hoofed ruminants are susceptible to FMD.

Blisters between the toes and on the heels, mammary glands and the lips or tongue, which prevent animals from walking or standing, feeding or ingesting, are common symptoms in animals affected with the disease according to the WOAH.

Humans can’t get FMD from animals, but they can become carriers and the virus can live on their clothing and shoes for a long time.