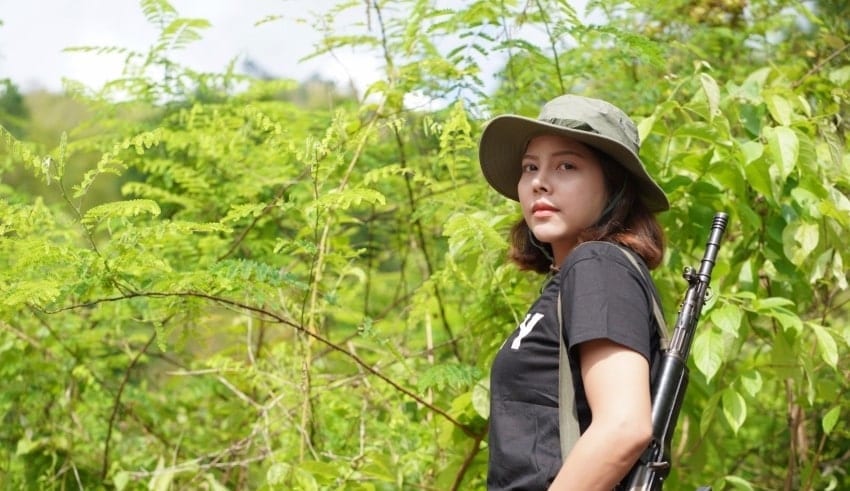 The former Myanmar beauty queen Htar posted a photo of herself carrying an assault rifle as she has joined the ethnic rebels to fight against the military junta.
(C) HtarHtetHtet2 / Twitter

The former Myanmar beauty queen Htar posted a photo of herself carrying an assault rifle as she has joined the ethnic rebels to fight against the military junta. The country has been in a destabilized position as well as economically paralyzed since the Feb 1 coup.

The beauty queen, Htar Htet Htet, who represented Myanmar in the first Miss Grand International beauty pageant in Thailand in 2013 and competed against 60 contenders has now joined the ethnic armed groups in the border regions of Myanmar which is a contrast to the glamour she is in eight years ago.

The revolution is not an apple that falls when it is ripe. You have to make it fall. (Che Guevara)
We must Win 💪💪💪 pic.twitter.com/iHEDhF314p

The 32-year old gymnastics instructor has posted her photo wearing black combat fatigues while carrying an assault rifle on her Facebook page along with the words, “The time has come to fight back. Whether you hold a weapon, pen, keyboard or donate money to the pro-democracy movement, everyone must do their bit for the revolution to succeed.”

It has been more than 100 days since the junta seized power but the brutal crackdown has not discouraged the people in Yangon and continued to protest against the junta to return the democracy in the country.

“I will fight back as much as I can. I am ready and prepared to give up everything. I am even ready to pay with my life,” Htar Htet Htet wrote in her post. The current Miss Grand Myanmar contestant Han Lay has also been outspoken about her thoughts against the military junta.

The coup has put an end to the decade-long democracy after half a century of military rule. More than 780 civilians have been killed by the security forces during the brutal crackdown of mass protests.

They have shot demonstrators in the streets, arrested people in night raids, locked up journalists and ordered internet outages. Thousands of people from the urban areas of the country have been fleeing to the border regions including even those who are involved with Suu Kyi’s political party as well as those who are involved in the protest movements and are facing arrest.

The ethnic rebel groups are now intensifying their efforts in attacking against the military and police during the recent months which instills fear among the people of Myanmar.