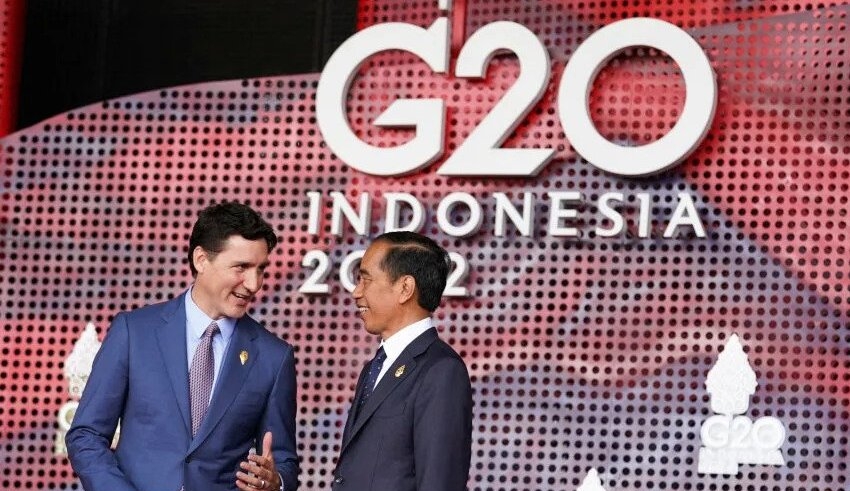 Speaking at the G20 Summit, Ukraine President Volodymyr Zelensky says the war should be ended 'justly and on the basis of the UN Charter and international law'
(c) Rappler

Tuesday, November 15, Ukrainian President Volodymyr Zelenskiy informed leaders of the world’s wealthiest nations that the time has come to end Russia’s war in his country in accordance with a peace plan he has offered.

He addressed via videolink to the leaders of the Group of 20 (G20) nations assembled on the Indonesian island of Bali for a summit that is overshadowed by the conflict in Ukraine and concerns over global inflation, food and energy security.

Zelenskiy stated that the war must be concluded “justly and in accordance with the United Nations Charter and international law.”

He advocated for the restoration of “radiation safety” at the Zaporizhzhia nuclear power plant, the imposition of price controls on Russian energy resources, and the expansion of an export effort for grains. He also demanded the release of all Ukrainian detainees.

“Please choose your leadership path, and we will implement the peace formula together,” he urged.

Despite significant divisions over the war, Indonesian President Joko Widodo launched the summit with a call for unity and tangible action to repair the global economy.

“We have no choice but to work together to rescue the world,” he stated. “The G20 must be the impetus for an inclusive economic revival. We shouldn’t separate the universe into sections. We cannot allow another cold war to break out in the world.”

The G20, comprised of nations such as Brazil, India, Saudi Arabia, and Germany, accounts for more than 80% of the world’s gross domestic product, 75% of international trade, and 60% of its population.

On the day of the summit, a good indicator was a three-hour bilateral conversation between US Vice President Joe Biden and Chinese leader Xi Jinping, during which the two leaders committed more frequent talks despite their numerous disagreements.

The meeting on Monday was the first face-to-face encounter between the two men since Biden became president, and the talks looked to reflect a turnaround in relations between the superpowers following a recent downward spiral.

Since Russia’s invasion of Ukraine in February, which Moscow defined as a “special military operation,” this is the first G20 meeting to be place.

Some Western politicians have called for a boycott of the summit and the removal of Vladimir Putin’s invitation as a result of the war.

Indonesia refused, refusing to revoke Putin’s invitation and also resisting, according to Indonesian sources, G7 pressure to condemn Russia at this week’s summit.

Putin was reportedly too busy to attend the summit, and Foreign Minister Sergei Lavrov attended in his stead. Lavrov denied a Monday news agency claim that he was hospitalized in Bali for a heart issue and was present for the meeting.

It was unclear whether he remained in the room while Zelenskiy delivered his address.

Diplomatic sources indicate that a joint G20 communique, which would require the agreement of all countries, is doubtful, as Indonesia prefers a leaders’ proclamation.

On Monday evening, however, European Council President Charles Michel reported that officials had reached a “good” agreement on a text communique.

According to a draft obtained by Reuters, the leaders of the G20 will condemn the use or threat of use of nuclear weapons.

However, the leaders would need to confirm such a communiqué.

The failure of the G20 ministers’ meetings to generate joint communiques has been attributed to disagreements between Russia and other countries over wording, notably how to depict the conflict in Ukraine.

US authorities have stated that Biden will not apologize for defending Ukraine.

“I won’t prejudge the final negotiations, but the G20 will make it plain that Russia’s war is creating devastation on people everywhere and the global economy as a whole,” said a US official who spoke anonymously about the summit.

In contrast, Xi and Putin have grown closer in recent years and reaffirmed their relationship days before the Russian invasion of Ukraine. Nonetheless, China has avoided providing direct material help that may trigger Western sanctions against it.

Xi informed French President Emmanuel Macron during a bilateral meeting on Tuesday that China supported a truce and peace talks in Ukraine, according to Chinese official media.

During their conversation, Biden and Xi “emphasized their opposition to the use or threat of use of nuclear weapons in Ukraine,” according to a White House statement. According to a statement from the Chinese foreign minister, Xi reminded Biden that nuclear weapons and conflicts cannot be employed. Since its invasion of Ukraine in February, the West has accused Russia of making irresponsible statements on the possible use of nuclear weapons. The West has been accused by Russia of “provocative” nuclear rhetoric.

Many of the leaders will engage in bilateral discussions on the sidelines of the summit, and several of them will meet with Xi, who is making only his second international trip since the outbreak.

In an effort to calm tensions with the United States and its allies, Xi will meet with Australian Prime Minister Anthony Albanese, South Korean President Yoon Suk-yeol, and Japanese Prime Minister Fumio Kishida following his meeting with Macron.

Shi Yinhong, a professor of international relations at Beijing’s Renmin University, stated, “It is not definitive, but it is a significant step towards reducing conflicts.”