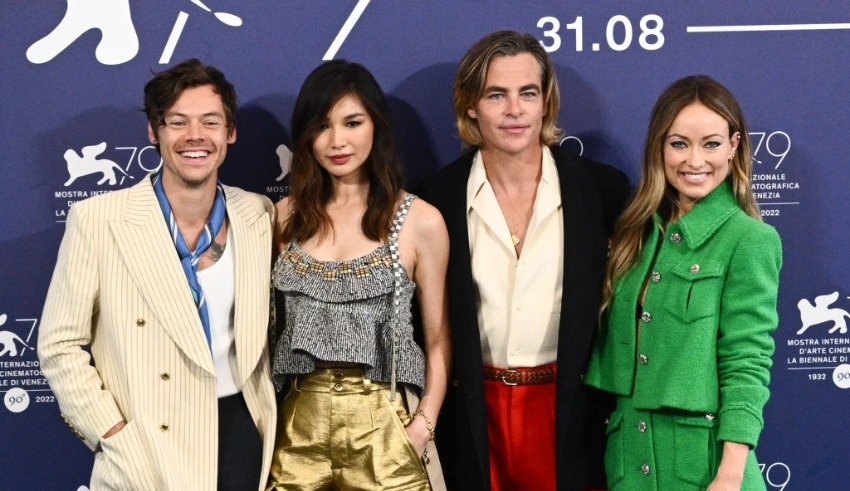 A spokeswoman for Pine has stated that the incident did not take place and referred to the allegations of Harry Styles' behavior as "a stupid fiction."
(c) POPSUGAR UK

Is there video evidence that Harry Styles spat on Chris Pine? A spokeswoman for Pine has stated that the incident did not take place and referred to the allegations as “a stupid fiction.” After the world premiere of Olivia Wilde’s “Don’t Worry Darling” at the Venice Film Festival, social media went into a frenzy. At the event, videos recorded from inside the theater showed Styles apparently spitting on Pine, although the act could not be confirmed with absolute certainty by the recordings. Over one and a half million people viewed a video of the two actors performing together.

According to Variety, a source with deep ties to the Venice Film Festival stated that there was no tension between Styles and Pine during the premiere and that no one at the event made any mention of the possibility of spitting occurring between the two of them. Additionally, a representative for Styles has been contacted by Variety.

When asked to “clear the air” regarding the rumors during the press presentation for the film held in Venice, Wilde responded by saying, “Florence is a force. Despite the fact that she is working on the set of ‘Dune,’ we are extremely thankful that she is able to make it tonight [for the red carpet]. As a filmmaker, I am well aware of how disruptive it can be to lose an actor for even a single day, which is why I am really thankful to her and to Denis Villeneuve, who directed “Dune,” for supporting us. In addition to that, we will honor her accomplishments later on tonight. I am at a loss for words to express how privileged I feel to have her serve as our leader. She is incredible.”

Wilde continued by saying, “As for all of the constant tabloid gossip and all of the noise that is out there, the Internet feeds itself. I don’t see the point in making a contribution because I believe that it is already well nourished.”

On September 23, “Don’t Worry Darling” will be released in theaters by Warner Bros.