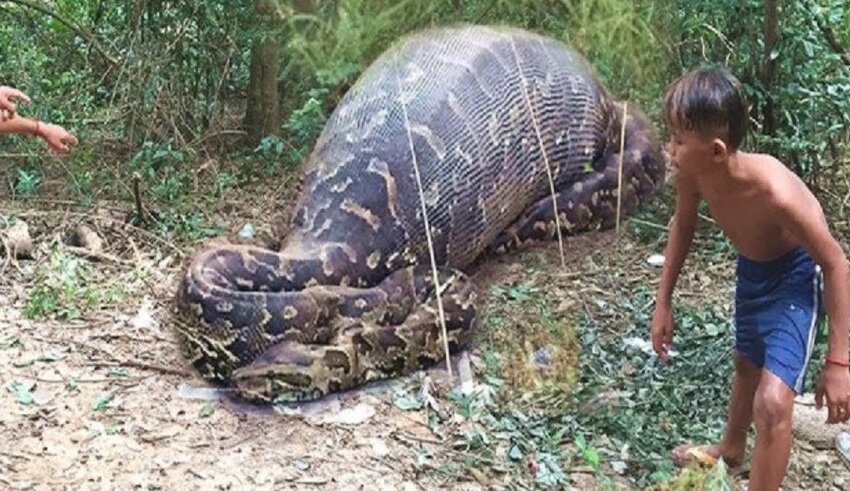 When she didn't return that evening, search parties were sent on their way to find her. The next day, residents found the missing woman inside a huge python.
(c) Inked Mag

According to local sources, a woman was killed and consumed whole by a python in the Indonesian province of Jambi.

Sunday morning, Jahrah, a rubber tapper reportedly in her fifties, made her way to a rubber plantation.

She was reported missing when she failed to return that evening, and search parties were dispatched to locate her. The following day, residents discovered a python with a big stomach.

Later, locals killed the snake and discovered her corpse within.

“The victim was discovered in the stomach of the snake,” Betara Jambi police head AKP S Harefa told local media sites, adding that her body looked to be largely intact.

According to him, the victim’s husband discovered some of her clothes and tools she had used at the rubber plantation on Sunday night, prompting him to dispatch a search party.

After the at least 5m (16ft) long snake was discovered on Monday, villagers captured and killed it to confirm the victim’s identity.

“After separating the belly, they discovered Jahrah inside,” Mr. Harefa told CNN Indonesia.

Although such occurrences are uncommon, this is not the first time a python has killed and consumed a person in Indonesia. Between 2017 and 2018, two identical fatalities were reported in the nation.

Snakes consume their meal whole. Their jaws are joined by highly elastic ligaments, allowing them to wrap around huge prey.

An expert had previously told the BBC that pythons normally consume rats and other creatures, “but once they reach a certain size, it’s almost as if they no longer bother with rodents because the calories are no longer worth it.”

Mary-Ruth Low, a conservation and research officer at Mandai Wildlife Group at the time, stated, “They can grow as enormous as their prey.”

This can include large animals such as pigs and even cows.