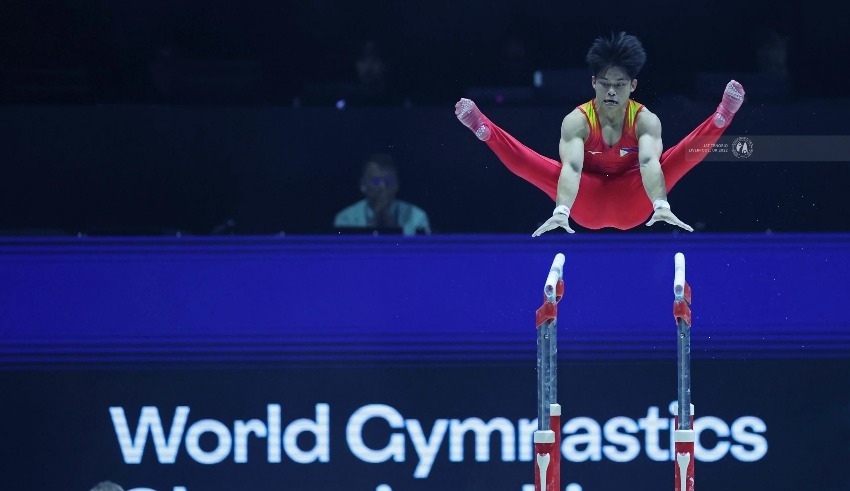 Carlos Yulo performed brilliantly at the World Artistic Gymnastics Championships in Liverpool, England, where he earned a shot at four medals, as expected.
(c) Sports Inquirer

As anticipated, Carlos Yulo performed admirably at the World Artistic Gymnastics Championships in Liverpool, England, where he won a chance at four medals.

On Monday, October 31, the 22-year-old gymnastics superstar qualified for the finals of the all-around, floor exercise, vault, and parallel bars in his return to the global stage (Tuesday, November 1, Manila time).

Yulo demonstrated his ambition to reclaim the floor exercise title he earned three years ago in Stuttgart, Germany – his first global title – by recording the highest difficulty (6.4) and execution (9.5) scores (8.866).

He leads by a significant margin over the defending world champion, Nicola Bartolini of Italy, who barely qualified for the finals in eighth place with 14.333 points.

In the vault, Yulo made a strong case for a second consecutive world title in the event as he ended behind only Artur Davtyan of Armenia, who earned the top spot with 14.9 points.

His landing on the Ri Se Gwang II (a piked Dragulescu), which earned Yulo the highest-tying difficulty of 6 points, was marred by a minor slip, resulting in a score of 14.733 before he rebounded with a score of 14.966 on his second vault.

Both of Davtyan’s vaults earned identical scores of 14.9 points.

Yulo later qualified for the finals in the parallel bars, an event in which he won silver in Kitakyushu, Japan, a year ago, ranking behind China’s Zou Jiangyuan (15.7), Japan’s Yuya Kamoto (15.433), and Germany’s Lukas Dauser (15.4).

On Friday, following a three-day hiatus, Yulo will compete against twenty-three other gymnasts in the all-around finals.