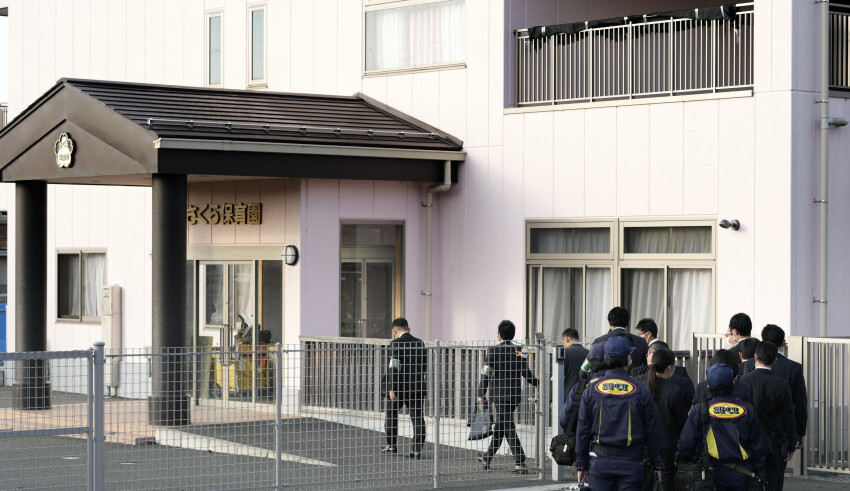 The former teachers are identified by the police as Sachi Miura, Kaori Komatsu, and Rie Hattori. They were arrested for their conduct against three infants.
(c) Kyodo News

Three female teachers formerly employed at a nursery school in Susono, a city in central Japan near Mount Fuji, were detained on suspicion of routinely abusing toddlers in their care on Sunday.

The teachers were detained hours after police searched the private school in response to the city’s Wednesday statement that they were engaged in 15 incidences of abuse between June and August, including holding toddlers upside-down by their feet and smacking their cheeks.

According to the city in Shizuoka Prefecture, the three confirmed the abusive behavior, which included forcibly removing their pants and brandishing a cutting knife in a threatening manner, but claimed they were attempting to punish the children.

There were six teachers in charge of the 1-year-olds’ class at the Sakura Hoikuen school. The police, fearing that the abuse was ongoing at the daycare, will examine confiscated records.

The authorities presumably conducted a search of the school out of concern that it might destroy evidence. Additionally, the homes of the three suspects were searched.

It is said that the school’s principal, Toshihiko Sakurai, forced the workers swear not to disclose the abuses.

Sunday, the mayor of Susono, Harukaze Murata, announced that he will file a criminal complaint against Sakurai on Monday for allegedly aiding the suspects in evading justice.

The former teachers are identified by the police as Sachi Miura, 30, Kaori Komatsu, 38, and Rie Hattori, 39. In June, they were arrested for their conduct against three infants.

Miura is suspected of pushing a female in the face on June 1, and Hattori is accused of striking a boy on June 10. On June 27, Komatsu is suspected of holding a youngster upside down by his feet.

According to officials, the local and prefectural governments began a special examination of the school on Saturday, interrogating Sakurai and requiring him to provide the three teachers’ employment records.

The city learned of the abusive behavior after receiving a report in mid-August. It met with Sakurai for its investigation, but kept the case secret for over three months.