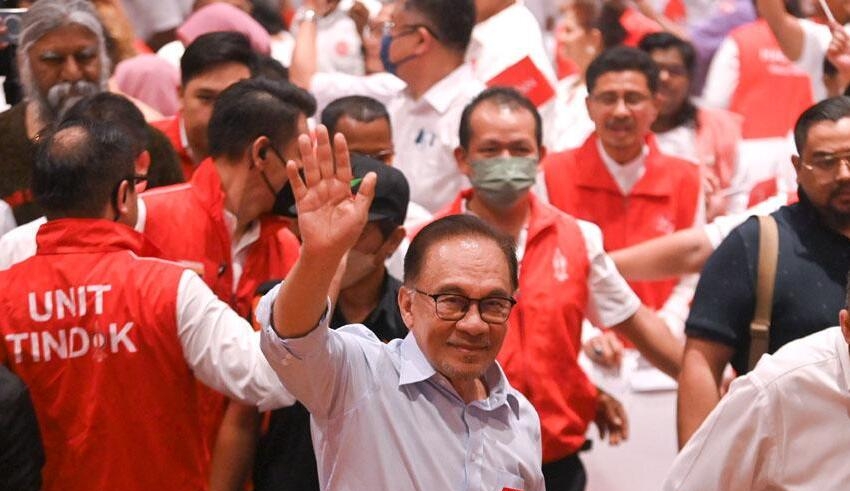 Anwar Ibrahim was set to become Malaysia's prime minister in 2020 after 20 years as opposition leader. Due to infighting, he was pushed back further from top
(c) Malaysiaknei

After twenty years as opposition leader, Anwar Ibrahim of Malaysia was ready to become prime minister in 2020. His partnership, however, disintegrated due to infighting, leaving him further from the top position than ever.

Now, Anwar, 75, is back on the national campaign road, attempting to persuade Malaysians to vote for him in the November 19 election so that he can finally realize his lifelong ambition of becoming prime minister.

He was in his element on the campaign trail, laughing with his followers while peppering his speech with Quranic verses and Malay folklore to attack his opponents and bolster his leadership credentials.

Anwar told Reuters he is hopeful about his coalition’s chances of winning and altering the political landscape in multiethnic, Muslim-majority Malaysia.

“We are here to highlight governance and anti-corruption and eliminate racism and religious hatred in our country,” he stated.

In the election, Anwar’s coalition faces competition from two rival coalitions, one led by incumbent Prime Minister Ismail Sabri Yaakob and the other by former prime minister Muhyyddin Yassin. There are a number of other parties competing, including one created by another former prime minister, Mahathir Mohamad, which is anticipated to divide the vote more than ever.

According to opinion polls, no one party or combination will be able to obtain the simple majority needed to form the government.

Anwar has the support of a third of the electorate’s ethnic Chinese and Indian communities, as well as urban voters. At a campaign visit in Tambun town, he drew throngs who spilled over the road and an ambulance driver who gave him a thumbs-up.

Due to his resistance to affirmative action for Malays and earlier accusations of sodomy, a crime in Malaysia, he lacks substantial appeal among the majority Malays. Anwar has spent about a decade in prison on charges of sodomy and corruption.

Despite a recent rise in popularity, Anwar trails his two rivals by 8 to 12 percentage points, according to a survey conducted by the independent polling firm Merdeka Center.

Merdeka stated that 26% of voters preferred his multiethnic coalition, while roughly 31% were still undecided on who to vote for. The Barisan Nasional alliance of Ismail placed second with 24%.

Anwar stated that he will neither collaborate with Ismail’s or Muhyyiddin’s coalitions due to “fundamental disagreements,” despite polls indicating that coalitions will be required to form the next government.

Anwar stated, “Any type of alliance will be a significant setback since it will consist primarily of racists and Muslim extremists.” He also ruled out cooperating with Mahathir, a former ally-turned-enemy.

A Malay nationalist party leads the Barisan. In addition to prioritizing ethnic Malay interests, Muhyiddin’s alliance includes an Islamist party that has advocated for sharia rule.

Anwar, who served as Mahathir’s deputy during his first term as prime minister, came close to becoming Malaysia’s next prime minister when the opposition beat Barisan for the first time in the country’s history in the 2018 election. Amidst significant outrage against the government over the multibillion-dollar 1MDB corruption crisis, his party allied with Mahathir.

Anwar was imprisoned for what he claims were politically-motivated sodomy allegations during the 2018 election, and was later pardoned.

In his first year as prime minister, Mahathir promised to transfer over authority to Anwar. Anwar’s wife succeeded him as vice-prime minister, but infighting over the transfer led to the collapse of the coalition 22 months later.

Muhyiddin temporarily served as prime minister, but Barisan returned to power in 2021 under the leadership of Ismail as part of a new alliance.

Oh Ei Sun, a senior fellow at Singapore’s Institute of International Affairs, predicted that Anwar would not receive sufficient Malay support to win the election.

“More rural Malay voters will return to (Barisan) specifically and Malay parties in general,” he stated.

After more than two decades at the helm, Anwar is also under pressure from members of his own coalition to step down and make way for new leadership.

When asked if this election might be his last, Anwar acknowledged his limitations.

In the following few years, it will be up to the public to choose whether or not he is deemed relevant.