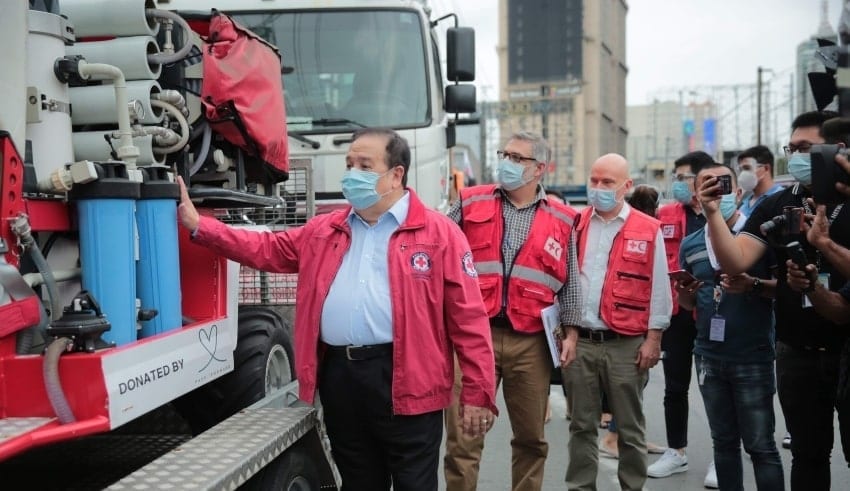 Gordon says over the radio, “We’re not greedy. All I’m saying is let’s be careful with our words because we were able to help.
(C) Philippine Red Cross/Twitter

MANILA, Philippines — Philippine Red Cross Chairman and Sen. Richard “Dick” Gordon defended the non-profit organization after President Rodrigo Duterte mentioned that PRC is hungry for money. PRC was running after the government over some of its unpaid debts.

Gordon says over the radio, “We’re not greedy. All I’m saying is let’s be careful with our words because we were able to help. We weren’t the ones who incurred debt. They did, we tested, shouldn’t they pay up?”

However, on the same interview, Gordon stated that the President may not be pertaining to the PRC when he said “Mukhang pera (greedy)” during a televised Cabinet briefing on the coronavirus. He added that he is giving the President the benefit of the doubt, out of his respect. This perhaps is for those who took advantage when PRC is not testing.

Health Secretary Francisco Duque told the Duterte last night that the Red Cross has resumed giving “free” COVID tests to the public, prompting Duterte to say, “Mukhang pera,” which translates to “greedy for money.” The Red Cross temporarily stopped giving free tests across the country after Philippine Health Insurance Corporation (PhilHealth), failed to pay for the tests. At one point, the government’s debt ballooned to PHP930 million (US$19.114 million).

It was reported that PhilHealth has so far paid P600 million to the Philippine Red Cross, with Gordon confirming that the state health insurer still needs to settle a balance of P372 million.

The country’s testing capacity flopped to a three-month low after the PRC’s testing ceased— reflecting a shortfall of public investment in coronavirus screening facilities. Other than the Red Cross, another private institution, a pharmaceutical firm Detoxicare Philippines Inc. also conducts coronavirus testing. While the government-run Research Institute for Tropical Medicine follows the PRC and Detoxicare in terms of the highest number of people tested for coronavirus.