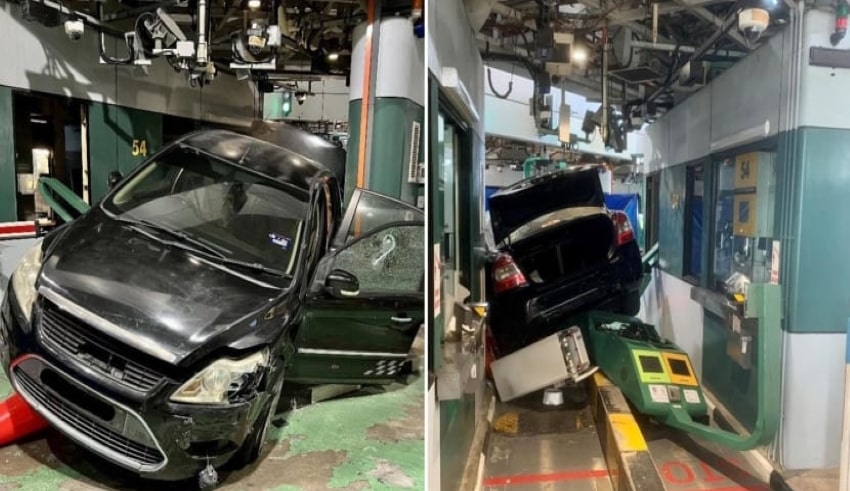 ASEAN – A person wanted by the police and the Central Narcotics Bureau crashed his way into Singapore through automated motorbike clearing lanes at Tuas Checkpoint early yesterday, injuring an Immigration and Checkpoints Authority (ICA) official (April 8).

The Singaporean, whose identity and age were withheld by ICA, was driving a Malaysian-registered vehicle. At around 2.15 a.m., he eluded clearance at Malaysia’s Komplex Sultan Abu Bakar and rushed towards Tuas Checkpoint, while being followed by Malaysian traffic cops.

An auxiliary police officer stationed at the entrance to Tuas Checkpoint observed the car and instantly raised an alarm, causing the checkpoint to be locked down.

“In order to get around the lockout, the vehicle attempted to enter Singapore via the automatic motorbike clearing lanes.” However, the lanes were too small, and the car was rendered immobile after colliding with the counters, according to ICA.

Two of the car’s passengers, a Chinese man and a Vietnamese lady, attempted to leave on foot but were apprehended by auxiliary police officers who had been dispatched to the scene.

A tumble while attempting to flee resulted in the woman’s injuries.

“Both of them were reportedly in possession of invalid travel permits and were held as a result,” according to ICA.

A right ankle abrasion was sustained by one ICA officer.

Later, the driver was discovered to be in possession of a modified Singapore passport.

ICA police seized him and his passengers for failing to halt for arrival immigration clearance at the checkpoint, among other offenses.

“A preliminary urine test revealed the driver had tested positive for drug use.” The authorities have placed (all parties) under custody. The investigation is still underway, according to the ICA.

The authorities cautioned that attempting to enter Singapore unlawfully and possessing fraudulent Singapore travel credentials are both serious offenses. Anyone found guilty of illegal entrance might face a prison sentence of up to six months and at least three strokes of the cane.

A person who is convicted of holding a fake Singapore travel document faces a sentence of up to ten years in prison or a fine of up to S$10,000 (RM30,959), or both.

“First-time offenders who damage government property will face a fine of up to S$2,000, a prison term of up to three years, and caning,” according to the ICA.