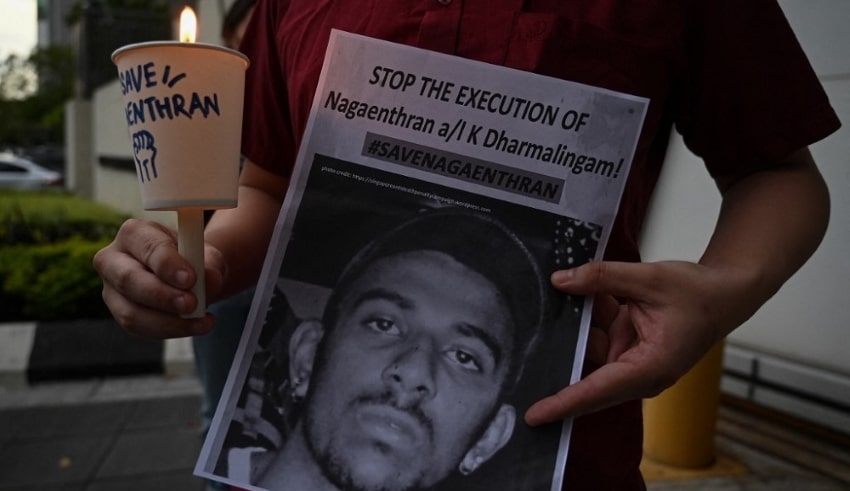 A mentally disabled Malaysian man will be hanged in Singapore next week after losing a last-ditch appeal, his sister said today, despite an international outcry about his case.
(C) Malay Mail

ASEAN – A mentally disabled Malaysian man will be hanged in Singapore next week after losing a last-ditch appeal, his sister said today, despite an international outcry about his case.

Nagaenthran K Dharmalingam was arrested in 2009 for trafficking a small amount of heroin into the city-state, which has some of the world’s toughest drugs laws, and handed a death sentence the following year.

But the plan to hang him sparked widespread criticism due to concerns about his intellectual disabilities, with the European Union and British billionaire Richard Branson among those condemning it.

His family has now been informed he will be executed on Wednesday next week, his sister Sarmila Dharmalingam told AFP.

Family members, including his mother and three siblings, will travel to the city-state to see him beforehand, she said.

M Ravi, a Singapore-based human rights lawyer assisting in the case, said the news of Nagaenthran’s looming execution was “heartbreaking”.

“The Singapore state will never be able to recover from the disgrace it’s going to face internationally in hanging an intellectually disabled person,” he said in a social media post.

Last month, the city-state conducted its first execution since 2019 when it hanged a drug trafficker, and fears are growing that several more people will be put to death in the coming months.

As well as Nagaenthran, three other men convicted of drugs offences have had their final appeals rejected.

Nagaenthran was arrested at the age of 21 after a bundle of heroin weighing about 43 grams (one and a half ounces) — equivalent to about three tablespoons — was found strapped to his thigh as he sought to enter Singapore.

Supporters say he has an IQ of 69 — a level recognised as a disability — and was coerced into committing the crime. Singapore maintains the death penalty for several offences, including drug trafficking and murder, and insists it has helped to keep the city-state one of Asia’s safest places.