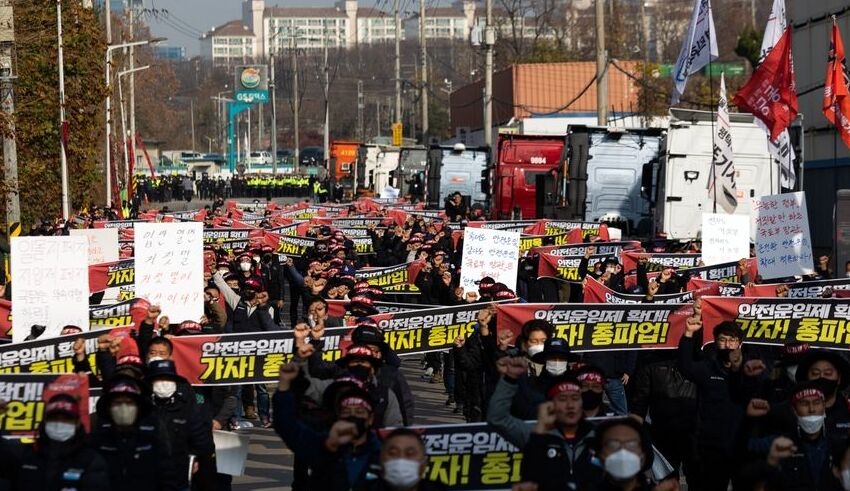 Truck drivers in South Korea have stated that the only thing keeping them from falling into poverty is their calls for tighter protections for minimum pay.
(c) Bloomberg

About 200 striking truckers huddle around gas heaters in five white tents outside the Uiwang container depot outside Seoul, attempting to combat the extreme cold and the government’s image that they are well-compensated “labor aristocracy.”

They are painfully aware of the effects their strike has had on South Koreans during a period of record inflation. However, these drivers, along with tens of thousands of others striking around the country, claim that their demands for better minimum wage safeguards are the only thing keeping them from falling into poverty.

“We are not enemies.” Kim Young-chan, a 63-year-old container truck driver who transports exports such as household appliances and cosmetics between the ports of Uiwang and Busan, stated, “We are loyal to our country since we are helping to exports. Our funds are stretched to feed and sustain us for a month. Labour nobility? That is complete rubbish.”

In response to rising gasoline prices, as many as 25,000 truckers are petitioning the government to make permanent the “Safe Freight Rate” minimum-pay scheme, which was implemented briefly in 2020 for a tiny percentage of the more than 400,000 truckers.

President Yoon Suk-yeol stated that his administration would not yield to what he termed “unjustified demands” by the truckers union, as the second major strike in less than six months hampers supplies of automobiles, cement, and petrol. The interior minister and a spokesperson for the ruling party have recently referred to truckers as “labor aristocracy.”

Pale and unshaven, the drivers occasionally leave their tents to sing slogans and distribute pamphlets.

Kim stated that the high price of diesel has made their lives no better than before their eight-day protest in June. Due to the roughly doubling of diesel prices, he now makes approximately 3 million won ($2,300) each month, which is significantly less than last year.

First discussions with striking truckers are planned by South Korea

In November, the country’s consumer prices increased by 5% compared to the previous year.

Kim stated that it broke his heart that his wife, who is over the age of retirement, must sweep floors and cook for money to maintain the family.

“Perhaps our lives will improve if freight rates remain consistent,” he remarked.

The government and the union have met twice for negotiations, but they remain far apart on two crucial issues: prolonging the minimum pay standards beyond the end of the year and expanding them to benefit more truckers.

The government has stated categorically that it will not extend minimum wage protections to truckers in the gasoline and steel industries, as they are currently adequately compensated.

Concerns are growing over gasoline and food shortages, which are generating economic distress.

Lee Ji-eun, a 36-year-old physician and mother of two, stated that she hurriedly refueled her vehicle on Thursday, December 1 due to fuel shortage concerns.

“I desire that the government and truckers achieve an agreement as quickly as possible. Such strikes, as well as those by subway workers or public officials, cause direct harm to average citizens like myself,” Lee added.

Near a large oil storage facility that supplies fuel outlets in Seoul, a dozen striking tanker drivers obstructed traffic early on in the strike. Thursday, they stopped after receiving complaints from neighbours.

Ham Sang-jun, a 49-year-old driver who transports oil from top refiner S-Oil Corporation to gas stations, said, “I know people are becoming tired of this strike and are asking, ‘Why again?'”

As of midday on Friday, 60 petrol stations were dry, according to the industry ministry. As a result of stocking up prior to the strike, stations nationwide had a stockpile of approximately one week’s worth.

In addition to Ham, around 90 percent of the 340 tanker drivers hired to deliver S-products Oil’s have quit, according to their union leader, Lee Geum-sang.

Their relatives fear for their employment security.

Ham, the father of two adolescents, makes between 3 and 4 million won each month working 12 hours a day, five days a week, frequently overnight and on the weekends. This is 2 million won less than the previous year due to fuel expenditures.

He stated, “I apologize to my wife and children because I am not a decent father. However, we must continue the strike for a better future ten years from now.”