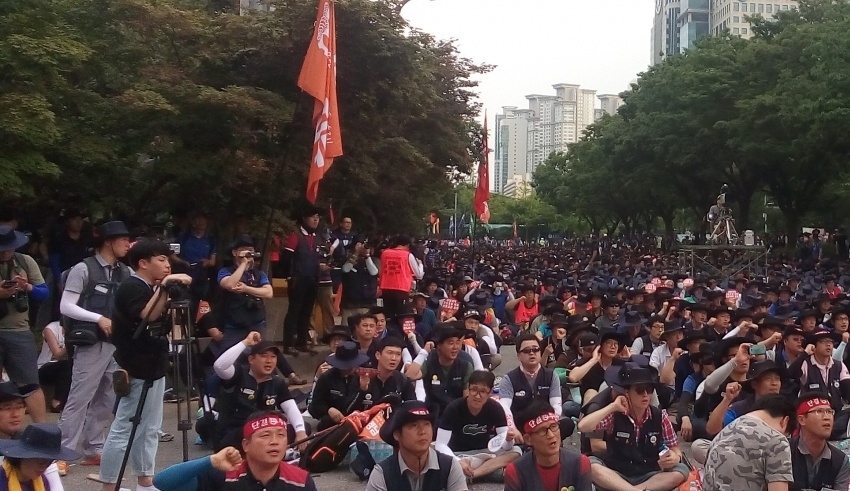 President Yoon Suk-yeol of South Korea warned that the government may intervene to break up a statewide strike by truckers, deeming it unlawful and undesirable to “hold hostage” the national supply chain during an economic crisis.

On November 24, thousands of unionized truckers began their second major strike in less than six months, which is already impacting several businesses in the tenth-largest economy in the world.

“The people will not accept taking the logistics system hostage in the midst of a national crisis,” Yoon stated in a Facebook post late Thursday night, after stating that exports were essential to overcome economic uncertainty and financial market volatility.

“Should the reckless denial of transportation persist, the government will be compelled to reconsider a range of actions, including a work start order.”

According to South Korean legislation, the government may issue such an order to compel transport personnel to return to their employment in the event of a significant transportation interruption. Infractions are punished by imprisonment for up to three years or a fine of up to 30 million won ($22,550).

If the government follows this course of action, it will be the first time in South Korean history that such a directive has been issued.

Transport Minister Won Hee-ryong told reporters on Thursday that preparations had begun for the order to be issued.

Lee Bong-ju, the leader of the Cargo Truckers Solidarity Union (CTSU), stated that the truckers had no alternative but to go on strike after the government halted discussions and stopped seeking conversation.

Lee told reporters on Thursday that the administration of Yoon Suk-yeol is threatening a hard-line response without making any measures to end the strike.

The Korea International Trade Association (KITA) received 19 reports of interrupted logistics on the first day of the strike. Inability to import raw materials, greater logistical expenses, and delivery delays resulted in penalties and the cessation of commerce with foreign purchasers.

KITA stated that in one occasion, raw supplies for a chemical firm were supplied under police protection after a transport van was prevented from accessing a plant by striking truckers.

The cement sector lost an estimated 19 billion won ($14.26 million) in income on Thursday, according to the Korea Cement Association, as shipments dropped to fewer than 10,000 tonnes as a result of the walkout. This is compared to South Korea’s peak season cement demand of 200,000 tonnes between September and early December.

The union claimed that around 25,000 transport employees in South Korea were participating in the strike, out of a total of approximately 420,000. The transport ministry reported that around 8,000 protesters camped out overnight at critical transit terminals on Thursday.