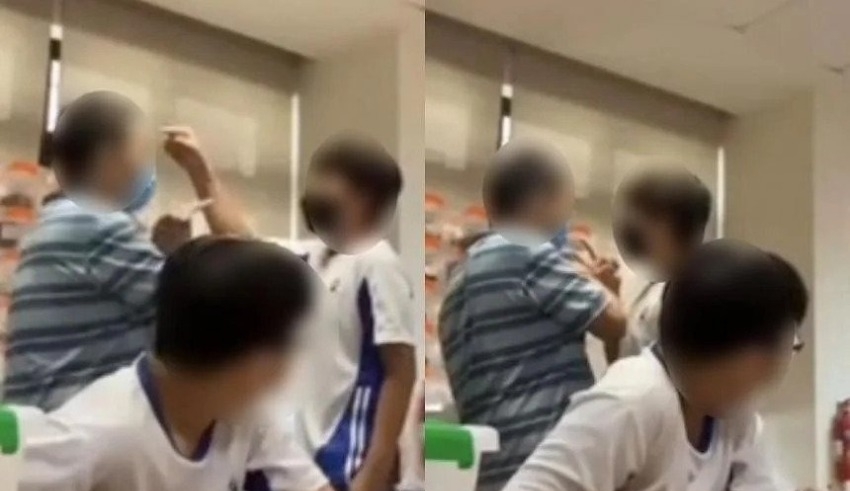 In the viral video currently circulating, a St Andrew's Secondary School student is seen confronting a staff member and threatening to end the teacher's life.
(c) The Straits Times

If a student becomes aggressive in class, whether it is shouting, spewing vulgarities – or threatening a teacher like in the St Andrew’s incident – teachers say they use various strategies to try to calm the situation.

“Once you get into such power struggles, it is usually more difficult for both parties to back down,” said Alan, a teacher who deals with discipline in his school.

Another teacher who has a rapport with the student in question may be called in to help calm things down, he said.

The student may be isolated so that he can reflect on his actions. The teacher involved would later visit the student with another neutral party.

Another teacher who wanted to be known as Jamie said that punishing a student immediately does not address the root of the problem.

“What we try and teach them is about understanding what your actions are and what are the possible consequences,” said Jamie, who has been teaching for 11 years.

There will then be disciplinary consequences, he added.

The names of teachers interviewed for this story have been changed at their request as they are not authorised to speak to the media.

Most teachers that CNA spoke to said violent threats from students, such as those that surfaced in a video recently, are rare.

In the viral video, a St Andrew’s Secondary School student is seen confronting a staff member and threatening to end the teacher’s life.

The school said in response to media queries that it takes “a serious view on disrespectful behaviour towards staff,” and has disciplined the student involved.

The Ministry of Education (MOE) said in response to queries from CNA that schools promote a safe and supportive environment for all students to prevent “challenging behaviors” that disrupt learning.

“Despite preventive measures, some students may, from time to time, display inappropriate behaviors,” MOE said, adding that it provides schools with guidelines to formulate their discipline policies.

“Rudeness to teachers is not condoned. It is considered student misbehaviour and hence firmly dealt with, according to the schools’ disciplinary guidelines,” the ministry said.

“When teachers experience incidents of open defiance, they will be supported by their school leaders and the student management team, who will assist to investigate the incident, engage parents of the student and mete out consequences where appropriate.”

In the wake of the St Andrew’s incident, many social media users asked what disciplinary methods schools and teachers can take against students who misbehave.

Schools may institute detention, suspension and corrective community service, depending on the circumstances of each case, MOE said.

“For serious offences, as a last resort, caning may be carried out for boys,” it said.

A police report will be made for certain offences as required under the Criminal Procedure Code, MOE said. These offences include housebreaking, murder and voluntarily causing hurt in committing robbery. Appropriate support will be given to ensure the well-being of the student under police investigation, it added.

Students being aggressive towards teachers is not uncommon, especially in secondary schools, teachers told CNA.

The teachers said that when an incident involving a teacher happens, the school’s disciplinary committee would typically be informed. Counselling usually goes hand in hand with other disciplinary actions, they added.

Some schools require both the teacher and student to write a statement.

Parents are also informed. The school then has some options in deciding on the disciplinary action, depending on how minor or major the offence is.

Students may be let off with a warning, especially if it’s their first time displaying such behaviour.

“More often than not, an apology to the affected party will be part of the consequences,” Jamie said.

It could be a personal apology or apologising to the class in a formal setting attended by the discipline master, she said.

“This is definitely one of the things that I have seen happen, which is useful because you put them back in the same position where they disrupted and then tried to assert power … the seriousness of the situation will not be taken away,” she said.

When it comes to repeat offences, in-house suspension is an option.

This means that students will have to turn up in school but do not go to classes or join their friends during recess, the teachers said. They also may not be able to represent their school in competitions.

“For some students, that works because they need the classroom environment, they need their friends. So it’s torture for them to know that they cannot do recess with their friends but they are still in school,” said Rachel, who has been teaching for more than 10 years.

They may also be asked not to turn up in school at all, which means an at-home suspension.

While caning is also an option for boys, the teachers who spoke to CNA said this is typically done in private, and that it doesn’t happen often in their schools.

“Nowadays it’s angling less and less towards caning. So it’s more the route of counselling, suspension, reflection,” said Nick, who has been a teacher for nine years.

At Alan’s school, the disciplinary action depends on the student’s intent and his offence.

“For example, if your intention right from the start is to cause hurt and then you really cause hurt – we may cane, we may suspend,” he said.

When such incidents happen, teachers may have difficulties containing their emotions, Rachel said.

Once, a student shouted at her to “watch her tone” when she reprimanded him.

“When a student raises his or her voice at the teacher, it is normal for the teacher to raise our voice as well. So it’s very hard for us to really calm ourselves down and talk normally because it’s unexpected that they speak to us like this,” she said.

Similarly, Nick said that while being the adult and a professional in the situation means that they must know how to handle themselves, it is not always easy.

“We have to know how to remove ourselves from such situations, but you know, arguments can happen … that’s the risky thing for teachers,” he said.

“So if that happens and it’s recorded, we are always in trouble first because we are the adults, but it doesn’t mean that teachers don’t lose their cool.”

He added that some parents can be defensive regardless of the situation.

While they are not the norm, such parents make things a “nightmare” for schools.

Issues relating to discipline are often “multi-faceted”, the Education Ministry said, adding that collaboration involving schools, parents and the community is essential to instill and reinforce the right values and behavior in students.

Schools put in effort to identify and help students who are known to show aggressive behaviour, and who may or may not be diagnosed with disorders like oppositional defiant disorder, teachers said.

Things may be tackled upstream when it comes to students who have been identified with behavioural issues, Alan said.

This includes telling the teacher how to manage the child and if the teacher needs support, where to get the support, he said.

The school may also go as far as planning deployment such that a teacher the student likes and listens to will teach them.

This includes looking out for talent – in sports for instance – that the students may have and encouraging them to pursue these activities, she said.

“A lot of soft approach is needed. For example, some of the kids don’t have money to eat, so you buy for them food,” she said.