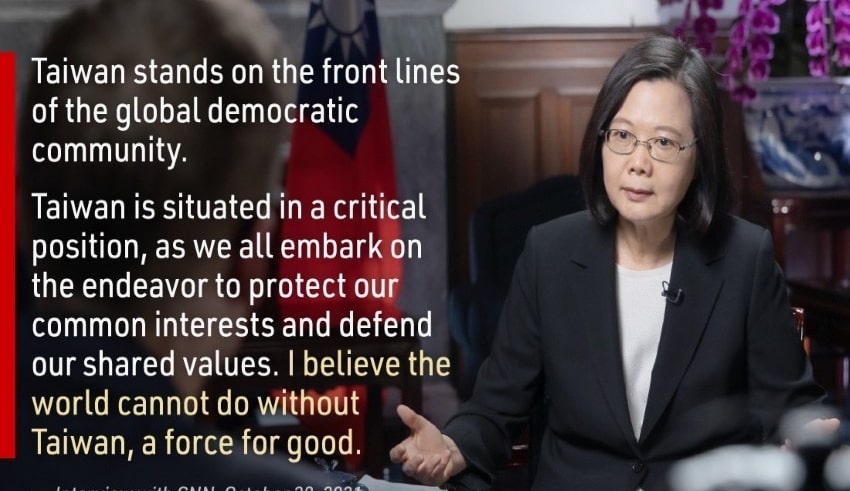 The president of Taiwan, Tsai Ing-wen expressed confidence that the US would protect the island if China launched a military assault
(C) Tsai Ing-wen / Twitter

Taiwan – In an interview with CNN, the president of Taiwan, Tsai Ing-wen expressed confidence that the US would protect the island if China launched a military assault.

“I have trust” that US soldiers would assist Taiwan protect itself, Tsai told the television network, adding that Washington’s commitment includes sending Americans to train Taiwan’s military, a program confirmed to the media earlier this month by a Pentagon official.

Tsai also added that they have a broad spectrum of cooperation with the United States aimed at enhancing their defense capacity.

Despite the present tense situation, she is optimistic that China and Taiwan may coexist peacefully.

We in #Taiwan are united in our determination to protect our country.

In my interview with @CNNi, I spoke about what Taiwan means to its people, the region & the world.

Under Chinese President Xi Jinping, who cut off formal contact with Taipei after Tsai’s victory five years ago and increased economic, diplomatic, and military pressure, the tension has reached a new high.

Tsai said earlier this month that Taiwan will not yield to Beijing’s pressure, characterizing the island as “standing on democracy’s first line of defense.”

Taiwan’s 23 million inhabitants live under continual danger of invasion from totalitarian China, which regards the island as its own and has sworn to conquer it, by force, if necessary, one day.

Despite Beijing’s constant threats, Tsai told CNN she is eager to meet with Xi to “eliminate misunderstanding” and resolve disparities in their political systems.

“We can sit down and speak about our differences and attempt to work out agreements so that we can coexist happily,” she said.

Last week, US Vice President Joe Biden told a televised event that Washington was prepared to protect Taiwan against any Chinese invasion.

The White House quickly took down the statements, preferring to retain uncertainty about whether it would intervene militarily if China attacked.