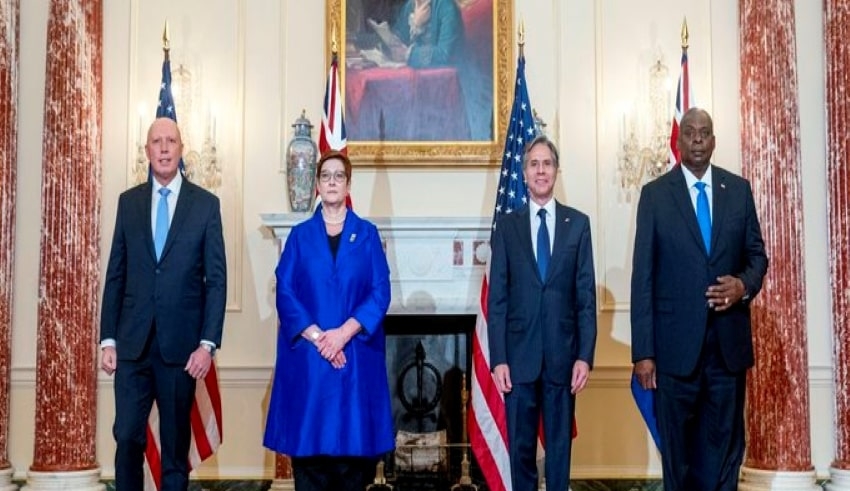 The Chinese embassy in Australia denounced on Friday the "unfounded allegations" leveled against China by Australia's defence and foreign ministers and their US counterparts after their annual meeting in Washington.
(C) 9NewsMelb

The Chinese embassy in Australia denounced on Friday the “unfounded allegations” leveled against China by Australia’s defence and foreign ministers and their US counterparts after their annual meeting in Washington.

In a statement released after the Australia-US Ministerial Consultations, the two nations voiced worry over China’s “expansive maritime claims in the South China Sea that lack legal foundation” and declared their desire to deepen relations with Taiwan, their “critical partner.”

Australia and the United States made their remarks a day after they announced a submarine contract as part of a security cooperation with Britain, which China criticized for escalating a regional arms race.

Australia and the United States also condemned China’s imposition of national security legislation in Hong Kong last year, claiming that it weakened the former British colony’s electoral system, stifled media freedom, and undermined the formula of “one country, two systems” agreed upon its return to Chinese rule in 1997.

The Chinese embassy rejected their allegations as a fruitless exertion of pressure.

“This petty attempt to exert pressure on China would amount to nothing more than a staged farce,” a Chinese embassy spokesman in Canberra said in a statement.

“We categorically oppose and reject false allegations and erroneous statements made against China over the South China Sea, Xinjiang, Hong Kong, and Taiwan, among other China-related issues.”

“Our administration will continue to cooperate closely with the US, Australia, and other like-minded nations to extend Taiwan’s international space, protect the democratic system, and advance common values,” Foreign Ministry spokeswoman Joanne Ou said. Australia and the United States also announced increased military cooperation after the Washington talks, including rotating deployments of all kinds of US military aircraft to Australia