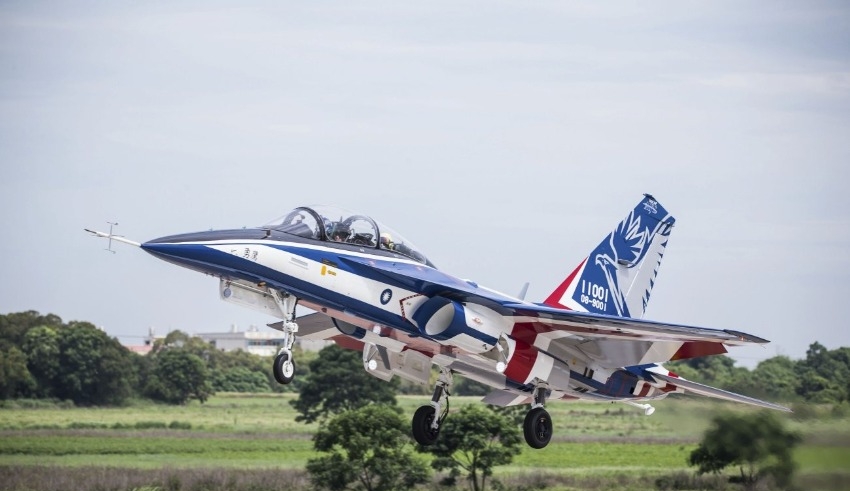 TAIWAN: It was on Wednesday (Jul. 6) that Taiwan’s air force showed off its new locally built and manufactured jet trainer, showcasing its more advanced, combat-capable qualities.

As China, which claims the island as its own, pushes up its military modernization efforts and conducts drills near Taiwan President Tsai Ing-wen has made the development of an advanced home-grown defense sector a priority.

The T$68.6 billion (US$2.3 billion) AT-5 Brave Eagle, built by the state-owned Aerospace Industrial Development Corp, will fly for the first time in 2020.

At the Chihhang Air Base in Taitung on Taiwan’s east coast, three Brave Eagles soared into the air to show off their capabilities in front of journalists.

In addition to landing and taking off with a shorter runway, flight training officer Chang Chong-hao claimed the Brave Eagle was appropriate for air combat training as well as air to ground combat training.

The pupils will have more room to deal with unforeseen circumstances.

The Brave Eagle trainer is capable of carrying weaponry, however this is still in the testing phase, and the plane is intended to serve as a back-up in times of conflict.

According to air force officer Huang Chun-yuan: “We’re not involved in the weaponry side, such testing is up to the company ADIC. General conversion training and tandem flying are our primary goals at the time.”

In order to replace the AT-3 and F-5 training aircraft that have been involved in numerous accidents in recent years, Taiwan’s air force aims to purchase 66 of them by 2026. Three F-5s have fallen in the last year or so, while an AT-3 first flew in 1980.

In Taiwan, the F-5s originally saw action in the 1970s, although they are no longer used in the front lines of war.