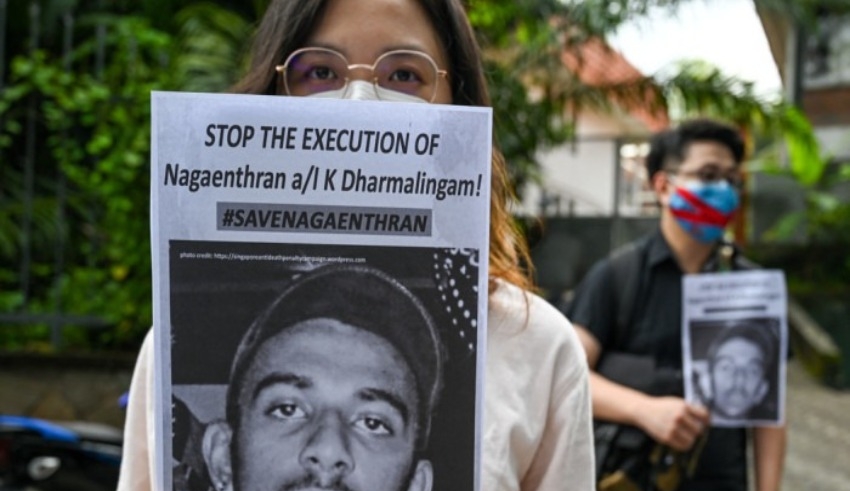 He also revealed the result of a separate study conducted by the ministry, which demonstrated that about 87% of Singaporeans are in favor of the death sentence.
(c) EWN

K Shanmugam, Singapore’s Minister for the Home Affairs and the Law, stated on Friday (September 2) that the country’s policy of enforcing the death penalty for those who are convicted of drug trafficking is one that is in the best interest of Singaporeans.

During a dialogue session with students from Nanyang Technological University, Mr. Shanmugam was replying to a question regarding how Singapore strikes a balance between different opinions, both domestically and globally, on the topic.

Mr. Shanmugam referenced a poll conducted by his ministry among non-Singaporeans from various parts of the region. According to the results of the survey, 83 percent of the respondents stated that the death sentence made individuals not want to smuggle big amounts of narcotics into Singapore.

“If I abolished the death sentence in Singapore, there would be a significant increase in the quantity of narcotics entering the country. Your lives, the lives of your siblings, and the lives of a great number of other people would be in danger. If we do away with the death penalty, then more people will be killed in Singapore,” he continued.

He also revealed the results of a separate study conducted by the ministry, which demonstrated that about 87% of Singaporeans are in favor of the death sentence.

“Therefore, there is not a significant amount of debate taking place in Singapore. It’s the same folks who keep bringing up the same concerns,” the minister remarked, before adding that Singapore is not the only country with laws that allow for the death penalty. China, India, and the United States are the three countries that have the most people on their death row out of all the countries in the world.

What international practice are you referring to, seeing as how all three of these countries already have the death penalty in place?

In continuation, the minister mentioned a high-profile case involving a convicted drug trafficker from Malaysia named Nagaenthran Dharmalingam. Dharmalingam was put to death in April after spending 12 years on death row. The situation in Singapore had attracted widespread attention all around the world, and the majority of the headlines focused on the purported intellectual handicap that Nagaenthran possessed.

Mr. Shanmugam brought up the fact that the United States had executed two men with IQ ranges comparable to Nagaenthran about the same time that the final appeal lodged by the Malaysian was turned down.

“No one is communicating with them by writing. He stated that nobody was complaining about anything.”

“So when we talk about international practice and local pressure, don’t fall into this trap that is formed by a few people repeating the same ideas over and over again. It’s set by a few people.”

In his response, the minister also discussed the effects of drugs, providing multiple examples and quoting numerous data, such as a report from the World Health Organization stating that drug misuse is linked to almost 500,000 fatalities annually.

“I don’t see why nobody has questioned that. … Those people’s lives are of no consequence?” Mr. Shanmugam posed the question to the crowd.

It is “probable that there will be more drugs” if the death penalty is abolished, and this, in turn, will lead to an increase in drug-related crimes, which will in turn lead to a loss in people’s sense of safety and security. He noted that this may potentially have an effect on Singapore’s standing as an important center for investment.

But Mr. Shanmugam was adamant that drug addicts “who haven’t committed any other infraction” are eligible for help in Singapore, and that this assistance is provided to them.

The plan is to treat people who abuse drugs as “people who need help,” and they will not be incarcerated nor will they have a criminal record as a result of this approach. Instead, the individual may be sent to a drug rehabilitation center or subject to supervisory orders, depending on the severity of their drug use and the frequency with which they engage in it.

When we do make an arrest of a drug trafficker, though, we take a very severe approach to dealing with them. In addition, he stated that “I am prepared to defend this anyplace, except all of these untruths, claims which are intended to put you in a certain frame of mind, and falsehoods.”

“Let’s face the facts: have we been successful in preventing any deaths in Singapore? … The answer is in the affirmative.”

Mr. Shanmugam gave an opening speech at the beginning of the dialogue session, during which he elaborated at length on the internal and external challenges that Singapore is currently facing before opening the floor to questions from the students. The dialogue session lasted for almost two and a half hours in total.

Domestic issues include a “tight balance” that the government needs to strike when it comes to the finances of the country as a result of the inability to raise taxes while also coping with higher spending needs, a rapidly aging population in Singapore, and income inequality. These factors all contribute to the difficulty of achieving a “tight balance.”

The minister also discussed the dangers posed by external factors, focusing his attention primarily on the commercial rivalry that exists.

Mr. Shanmugam provided several illustrations to illustrate the level of rivalry that Singapore’s maritime and aviation industries are up against. For example, the former, which is responsible for the maintenance of over 170,000 employment and contributes 7% of the country’s gross domestic product, is confronted with obstacles such as the development of other ports in the area and the constant movement of trade routes.

He went on to mention a report that was conducted by PricewaterhouseCoopers, which predicted that regional economies including Indonesia, Thailand, Philippines, Malaysia, and Vietnam would be among the world’s economies worth one trillion dollars by the year 2030.

“The concern is, if all of our neighbors are doing incredibly well and if they have a full suite of services, then what relevance do you have?”

Mr. Shanmugam also brought out some new developments that have arisen as a result of the COVID-19 epidemic, such as the tendency of working remotely.

“The more employees that say, ‘I want to work from home,’ the more businesses are going to argue that home doesn’t have to be in Bishan or Ang Mo Kio. Home may be in Bangalore or Shanghai or Manila; it just depends on where individuals are willing to work for one third (or one quarter) of their wage (of your salary).”

“So, what exactly is it that you offer that’s valuable? Students who had assembled in the Lee Kong Chian Lecture Theatre were the ones he questioned on why people should invest in Singapore and hire them.”

He warned that the current advantages that Singapore enjoys, such as a strong rule of law and a lack of corruption, could be duplicated by other nations, while also noting that other nations have their own advantages, such as greater access to land and lower costs associated with conducting business.

“Therefore, there are these issues that need to be thought about, and whether you think that in ten years, twenty years, or thirty years, we will be able to maintain our relative effectiveness, or if you think that others will overtake us.”