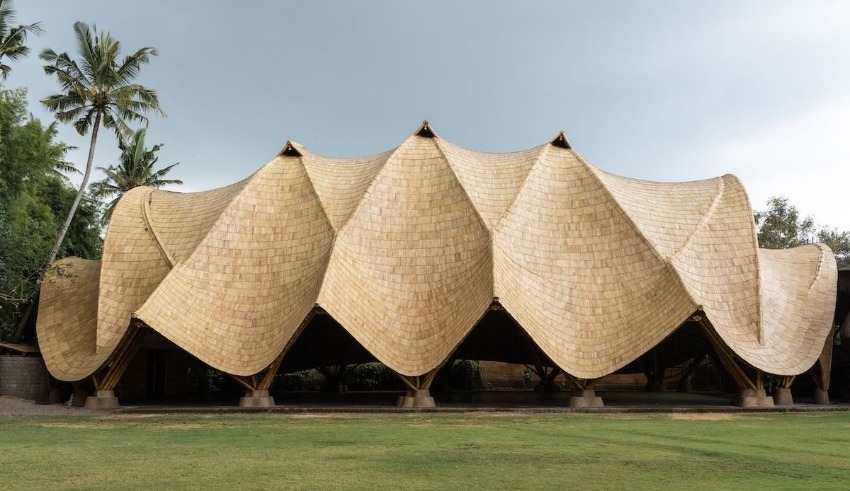 Its one-of-a-kind structures are largely constructed out of bamboo, mud, and grass, and the entire campus is powered solely by renewable energy sources.
(c) My Modern Met

The Green School is an international school and community that is well-known throughout the world for its holistic educational philosophy. It may be found amid the verdant forests of Ubud, which is located in Bali. Because the academy places such a heavy emphasis on preserving the environment, it was only logical that it be constructed in an environmentally conscious manner. Its one-of-a-kind structures are largely constructed out of bamboo, mud, and grass, and the entire campus is powered solely by renewable energy sources; even waste from food production is recycled into compost.

“In our opinion, the educational system needs to be revamped.” According to Sal Gordon, who has worked at Green School Bali for almost ten years and currently serves as the head of teaching and learning there, “It needs to adapt to the future. The goal of education, in our view, should be to make the world a better place, and one of the things that our students learn is how to make the world more sustainable.”

The Heart of School, which does not have any walls, is where the majority of the action takes place. In contrast to other schools, in which professors require their students’ undivided attention, the fact that some children may become distracted here is not at all surprising.

“There are benefits to not having any walls, the most evident of which is that you are more linked to the natural world. According to Gordon, “there are definitely issues that come along with that as well because it is pretty distracting.” As an illustration of this, he pointed to the adorable bunnies that were hopping around on the grass outside the building. “But allowing yourself to become sidetracked by nature is quite OK.”

Students as young as three and as old as eighteen are welcome to enroll in the regular lessons offered at the institution, which include subjects such as science and mathematics. In addition to that, pupils take part in programs that help them develop their abilities to be entrepreneurial and to solve problems at an early age. These programs frequently have an emphasis on promoting sustainable practices.

For instance, children in middle school just recently established their very own kitchen and designed a whole restaurant system that included jobs such as managers, chefs, accountants, and waiters. The purpose of developing this project was to make the pupils more aware of the difficulties that exist in the actual world.

“That was my kid, and he worked as a waiter while he was in that class. And he left,” Gordon said with a chuckle after the sentence.

Gordon went on to say that the goal of the educational philosophy followed by the school is to provide kids with a variety of meaningful learning experiences. “They might go home and say, ‘I read a really amazing book,’ but they will undoubtedly go home and say, ‘We built a new area for the hens,'” I said. “We constructed a new place for the chickens.”

Elora Hardy, a sustainable designer, has also made her imprint on the school more recently. Her father John and stepmother Cynthia Hardy founded Green School in 2008, and Elora Hardy is the daughter of John and Cynthia Hardy. The creator of the Ibuku design and architectural company, which specializes in environmentally friendly homes and buildings, has been the mastermind behind a dozen of the structures located on campus over the course of the past 12 years. Because it only takes three to four years for bamboo to mature into a usable form, it is an environmentally friendly material that she incorporates into her designs.

“I had no idea what to make of the Heart of School when I first walked in there,” she said. “What is this?” When asked about her early memories of the school, Hardy stated that she “simply had to start to be a part of this.”

The awe-inspiring Arc, which is a space utilized for sporting activities, is the most recent and impressive achievement. The remarkable five-story building is a triumph of architectural engineering; it is made up of intersecting bamboo arches that are 14 meters tall and span 19 meters wide, which is equivalent to more than three badminton courts.

“We wanted to create a situation where your whole body would want to toss a ball in the farthest and highest arc that you could possibly achieve. She explained that from a more logistical standpoint, we needed to consider how to span that space while avoiding any columns in the middle.”

Gordon continued, “It is without a doubt one of the most stunning and amazing gyms in the entire world.”

The Arc was recognized as the most sustainable building by the Dezeen Awards in the year 2021.

She went on to say that “but for almost twenty years now, we have had a way to organically treat bamboo by making it salty enough that the bugs would no longer eat it.”

She stated, “We can have homes that are gorgeous, glamorous, and luxurious made out of the same material that will be so important and useful for creating relief housing and all kinds of practical, much more important basic necessities in the world.”

And all of this, in many different ways, gets its start in a school, where youngsters are given the opportunity to learn and the room to dream about things that were once thought to be impossible. Students in Bali, as well as those attending Green School’s expanding network of schools across the world, which now includes schools in New Zealand, South Africa, and Mexico, are inculcated with exactly this philosophy on a daily basis.