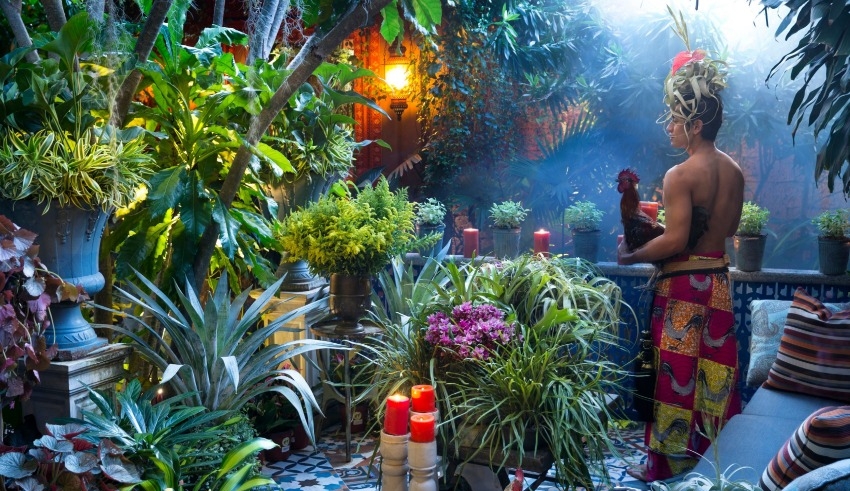 It would be an understatement to say that the luxury hotel designer home in Bangkok is a feast for the senses due to the fact that it is so much more than that.
(c) Pinterest

It would be an understatement to say that luxury hotel designer Bill Bensley’s home in Bangkok is a feast for the senses due to the fact that it is so much more than that. The home is located in Bangkok.

Bensley cracked a wry smile as he said that the design philosophy of Baan Botanica is referred to as “lebih gila, lebih baik” in Indonesian. The wilder something is, the better. It is without bounds, and it is without limits.

At first sight, the radically maximalist 34,400 square foot space that serves as home to Bensley and his partner, designer and horticulturist Jirachai Rengthong, as well as their pack of Jack Russell puppies, may appear to be a little bit “crazy.” Despite what it may appear like, there is logic behind all of this chaos.

After all, he is one of the most well-known resort architects in the entire globe, and throughout the course of his career, he has developed approximately 200 luxurious resorts located in forty different countries.

His design practice is based in Bangkok, and it boasts an ever-growing list of high-profile projects. Some of these projects include the Capella Hanoi, the Rosewood Luang Prabang, and the Shinta Mani Wild in Cambodia. All of these projects feature his signature style of immersively exuberant decor that manages to still look coherent and pulled together.

Naturally, the thought palace that he resides in is his home, the Baan Botanica. The home is lavishly adorned with a vibrant mix of colors and contrasting textures, and it is crammed to the gills with a wide variety of treasures that the couple has amassed over the course of their years spent traveling the world. These treasures range from priceless antiques and rare furniture to one-of-a-kind art pieces and quirky bric-a-brac.

For instance, the master bedroom features a rare carved wooden arch from the Dutch Embassy that dates back to the 18th century. Additionally, the room features two carved wooden lions that flank the bedposts, which contribute to the feeling of grandeur that permeates the space.

He is drawn to the space’s unique personality, which is enhanced by the presence of these antique and vintage artifacts. “Nearly everything that we have here was derived from recycled materials. Something that is old has this gravitas that you cannot replace with the things that are brand new today,” he remarked. “This is why I like to collect old things.”

“In Baan Botanica, it is almost like a constantly rotating showcase of the newest items and the best of the antiques we have been fishing for over the course of the previous two decades.”

“There are something like a couple of dozen finely crafted, mostly Burmese, wooden carved deer heads, antelope heads, and antelope racks,” he said. “There are also a couple of dozen wooden carved deer heads.” A single mount could appear to be out of place, but “together as a group it becomes really successful” as a vignette that guests can linger over and appreciate looking at for longer periods of time.

Bensley, who was born in California, bought the house for the first time in 1997 from a man in the United States whose name was Billy Bones. Bensley admitted that it was the owner’s name that initially drew him to this mansion. “When we first began this endeavor, which was many years ago, we effectively took over a shell. When we first moved in, the house looked drastically different.” As he put it, “at this point, the forest has been more or less tamed.”

Today, in addition to its usage as a residence, the house also serves as a type of laboratory for the couple, in which they experiment with many innovative and interesting architectural ideas, some of which may eventually be implemented in other projects that they are working on.

“Due to the fact that we utilize this home as a laboratory for our research, we are forced to undertake significant remodeling projects on an annual basis. Because we are both architects and landscape architects, whenever we have a novel concept, we will test it out first right here,” he explained.

In addition to the main house, the expansive grounds have 17 separate lush gardens and 11 freestanding structures. These structures include guest rooms, work rooms, and even an art studio where Bensley spends his weekends painting on enormous canvases.

The landscape architect, who is also considered to be one of the forefathers of the eco-luxury movement, takes a great deal of satisfaction in the fact that each of his gardens exudes a distinct ambiance thanks to the thoughtful way in which they have been designed. Discoveries abound in the form of opulent courtyards, authentic Balinese water gardens, and even party lawns. They do this by erecting gates in each garden, which encourages people to go through small tunnels and gives the impression that they are being transported into other themed worlds. This is their trade secret for accomplishing this.

Rengthong was quoted as saying, “It all comes down to what you see on a daily basis and how you choose to enjoy the things that you do see. I wanted to make a surprise for visitors, our friends, and anyone who may have never been to our place before,” he said. “I thought it would be fun to hold a game night.” You do not see the garden; rather, you have to look around for it, and there is a chance that you will become disoriented along the way.

In their own sanctuaries, the two individuals have also been responsible for the cultivation of hundreds, if not thousands, of tropical plant species. More than 25 different species of flowering plumerias can be found in Baan Botanica. These plumerias come in a wide range of sizes and colors, from enormous white and yellow varieties to more diminutive red ones. Plant parents are likely to go completely bonkers over the abundance of plant life in Baan Botanica. In addition to that, Rengthong maintains a nursery where he breeds Aglaonema plants and where he has already generated approximately two hundred different strains of the plant.

The grounds, just like the rest of the home, are stacked with decorative elements, including fountains and water features, pavilions, pergolas, and pagodas, amongst other architectural styles. Many of these are purchased from local artisans in Thailand, which is a testament to the quality of craftsmanship in that country.

When we walk in the front door after a long day at work, we are always struck by how different the atmosphere is. Rengthong remarked that it was quite reassuring to look around their house and witness a variety of trees and plants.
Bensley agrees completely and unreservedly with the aforementioned viewpoint. He made the following statement: “For me, Baan Botanica is a cornucopia of some of the finest antiques, art, and animals that I have ever come across in the last 25 years.”