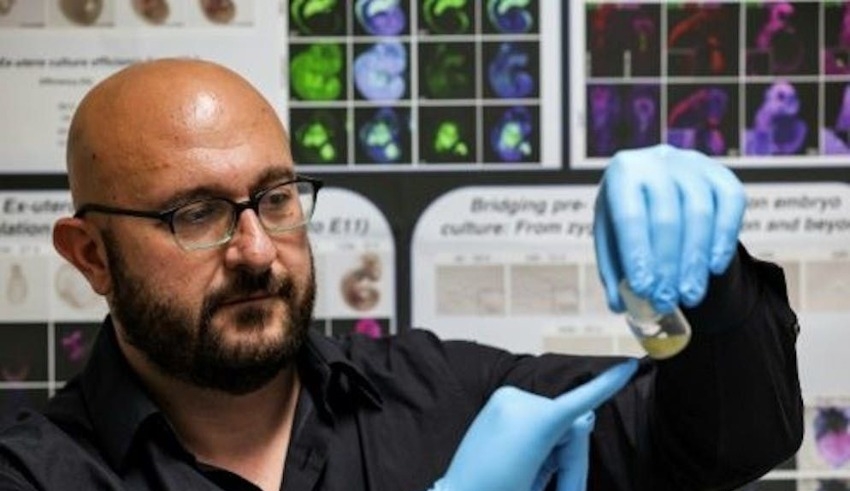 Biologists have developed mouse embryo models, without the need of fertilized embryos, in the laboratory, which is being hailed as a world-first feat.
(c) Switzerland Detail Zero

Biologists have developed mouse embryo models in the laboratory, which is being hailed as a world-first feat. They were able to do this without the need of fertilized eggs, embryos, or even a mouse. Instead, they relied solely on stem cells and a specialized incubator.

This accomplishment, which was published in the journal Cell by a group of researchers led by scientists from the Weizmann Institute of Science in Israel, is a very sophisticated model of what occurs during the early stages of mouse embryo development, specifically in the stage just after implantation.

This is a very important phase: There are a lot of miscarriages that happen around this time in human pregnancies, and we don’t fully know why. Having models gives us a way to better understand what could go wrong and possibly gives us some insight into what we could do to fix the problem.

Not only does it mimic the cell specification and layout of an early-stage body plan – including precursors of heart, blood, brain and other organs – but it also includes “support” cells like those found in the placenta and other tissues that are required to establish and maintain a pregnancy. This makes the newly published model particularly interesting because of its very complex structure.

When it comes to most animals, the initial phases of pregnancy are challenging to research. Within the uterus, the embryos are difficult to find and examine since they are minute and comprise very small clusters of cells.

But we are aware that even at this early stage of development, things have the potential to go wrong. For instance, environmental influences might influence and interfere with development, or cells may fail to get the appropriate signals to fully construct the spinal cord, as is the case with spina bifida. Both of these scenarios can result in spina bifida. Using models such as these, we can begin to ask why things happen the way they do.

Nevertheless, despite the fact that these models are an effective study tool, it is necessary to keep in mind that they are not embryos.

They are unable to fully reproduce the cellular architecture and developmental potential of natural embryos, which are embryos that result from the fertilization of eggs by sperm and are hence referred to as natural embryos. They are only able to mimic certain parts of development.

The group of researchers who carried out this study emphasizes that they were unable to develop these models for longer than eight days, although a typical mouse pregnancy lasts for twenty days.

The ice industry flourishes in the summer heat in Shanghai

The study of embryo modeling is making significant headway at an accelerated pace, with new advancements being made each year.

In the year 2021, many groups of researchers were successful in coaxing human pluripotent stem cells, which are cells that have the potential to differentiate into any other type of cell, to self-aggregate in a Petri dish and imitate the “blastocyst.” This is the very first stage of embryonic development, occurring just prior to the intricate process of implantation, which is when a cluster of cells attaches itself to the lining of the uterus.

Researchers have even been able to begin exploring implantation in a dish using these human embryo models, which are generally referred to as blastoids. However, the process of implantation in humans is significantly more difficult than it is in mice.

Growing human embryo models of the same complexity as has already been achieved with a mouse model is still a far-fetched concept, but it is one that we should nevertheless take into consideration.

Importantly, we need to be mindful of how representative such a model would be; a so-called synthetic embryo that is grown in a Petri dish will have its limitations in terms of what it can teach us about how human development occurs, and we need to be conscious of that fact.

Because embryonic modeling cannot take place in the absence of a supply of stem cells, it is imperative that this question be asked when contemplating the potential applications of this technology in the future. From what are these cells derived?

Which do they belong to: human embryonic stem cells, which originate from a blastocyst, or induced pluripotent stem cells? The latter can be produced in the laboratory using, for example, skin or blood cells, or it can even be created from samples that have been frozen.

One of the most critical questions to ask is whether or not special consent is needed in order to use cells for this specific kind of study, which involves trying to recreate an embryo in a dish. It is important for us to give more consideration to issues such as how this field of study will be managed, when it should be used, and by whom.

On the other hand, it is essential to be aware of the fact that there are already regulations in place as well as international guidelines for stem cell research that give a framework to control this field of study.

Under the law that has been in effect in Australia since 2002, doing research using human stem cell embryo models would require a license. This license would be analogous to the license that is necessary for the use of natural human embryos.

However, in contrast to the laws of other jurisdictions, Australian law also places restrictions on how long researchers are permitted to cultivate human embryo models. These limitations are something that a number of researchers would like to see relaxed.

Before a choice can be made about this issue, there must first be a more in-depth discussion within the community, and this is true regardless of whether or not other alterations are made to the manner in which and the timing of human embryo research.

There is a difference between prohibiting the use of this technology and other technologies, such as cloning, in humans for reproductive purposes and allowing research to be conducted using embryo models in order to advance our understanding of human development and developmental disorders for which we have no other answers.

The scientific community is making remarkable strides. Even though most of the research has been done on mice up to this point, it is important to explore what this means for humans and to think about where and how we should draw a line in the sand as the science develops.