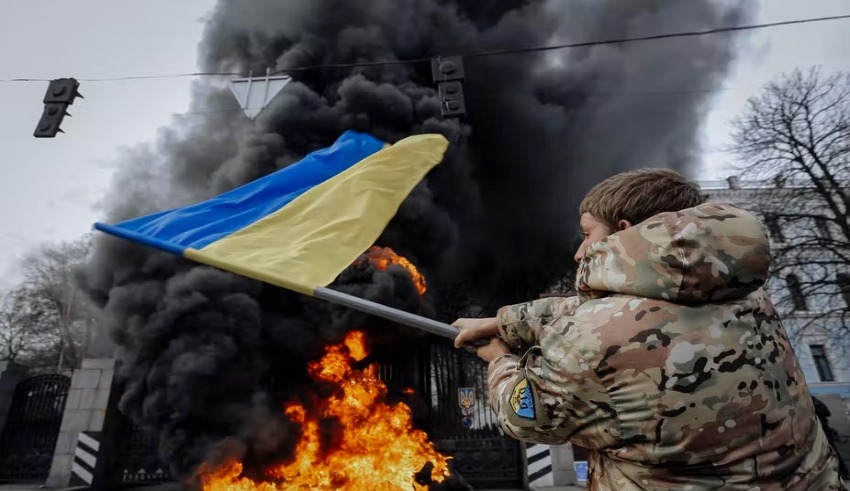 Zelenskyy asks for armament assistance and EU membership to fend off Russia bombing. The recent artillery shelling over Donbas alarms the nation further.
(c) The Conversation

KYIV: Zelenskyy said Russia’s overwhelming air and artillery operations were intended at destroying the Donbas region, and called for Ukraine’s allies to expedite the arrival of heavy weaponry so that they could equal Russia in combat.

A meeting of European leaders will be held in Brussels on Thursday (Jun 23) to officially begin the lengthy process of integrating Ukraine into the European Union. After four months of brutal violence that has killed hundreds, displaced millions, and damaged cities, this action will help improve national morale.

When asked about Ukraine’s need for more powerful and quicker weaponry, Zelenskyy stated in a video message that was broadcast early on Thursday, that they must liberate their territory and win victory, but more swiftly, a lot more rapidly.

He added that massive airstrikes and artillery shelling took place over Donbas. They are still aiming to obliterate the whole Donbas one step at a time according to him. As a result, they have repeatedly emphasized the need to speed up the delivery of weapons to Ukraine. In order to stop this wicked armada and force it out of Ukraine’s borders, they urgently need equal footing on the battlefield.

Pro-Moscow separatists claimed that they had occupied most of Vovchoyarivka, a settlement some 12 kilometers southwest of Lysychansk, according to the Tass news agency. Lysychansk would be more vulnerable if this were true.

However, there was no instant confirmation from Reuters.

Russian soldiers have stepped up their bombardment on Ukraine’s second-largest city, Kharkiv, near the Russian border, as the Donbas battle of attrition continues.

Kharkiv saw its deadliest Russian attacks in weeks this past Tuesday and Wednesday after Ukraine drove Moscow’s soldiers back last month.

At least 20 people were allegedly killed in the attacks, which Kiev characterized as an attempt to compel Ukraine to divert resources from the Donbas to defend civilians.

The Kharkiv region’s governor posted on Telegram that “there is no break in the bombardment of people by the Russian occupation. As one analyst put it, this shows that the Russians will not retire under pressure as they did in Chernihiv or Kyiv.

Calls for a EU membership

Putin’s “special operation” to protect Russian safety and de-Nazi-fy Ukraine resulted in the invasion of Ukraine on February 24. There are worries of a larger battle in Europe since Ukraine and the West have accused this reason for choosing war as a bogus pretext.

Vladimir Putin has long been wary of stronger ties between Ukraine and the European Union (EU) and NATO, two Western organizations that were formerly part of the Soviet Union.

After speaking with 11 EU leaders on Wednesday, Zelenskyy said he will make further calls on Thursday. Before, he said that he expected the EU27 would be in favor of Ukraine becoming a member state.

Told the audience in Amsterdam, “We deserve it,” Zelenskyy said through video connection.

They estimate that it will take Ukraine a decade or more to satisfy EU standards. According to European Union officials, the union must show its appreciation for Ukraine’s sacrifice.

As a result of the Ukraine conflict, gas, oil, and food prices have skyrocketed throughout the world, forcing the EU to lessen its heavy dependence on Russian energy and resulting in Finland and Sweden seeking NATO membership, respectively.

An EU official stated on Wednesday that the EU would temporarily return to coal in order to deal with diminishing Russian gas supplies without jeopardizing long-term climate objectives.