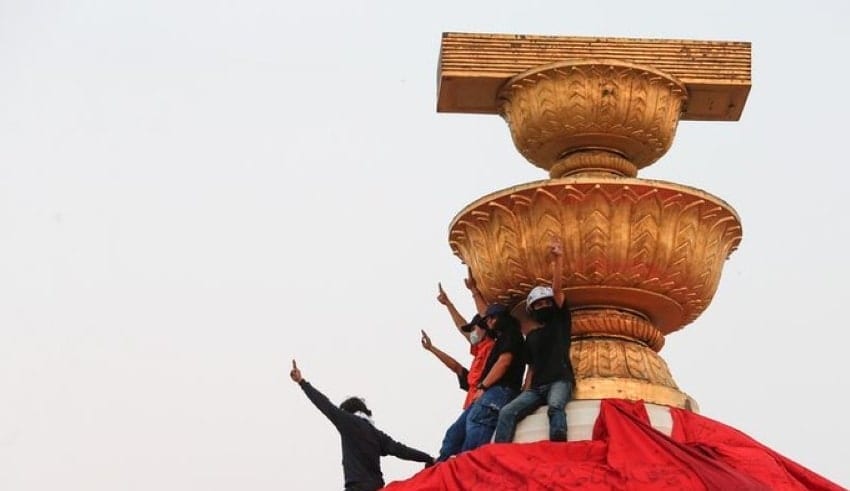 Thai pro-democracy demonstrators climbed a huge Bangkok statue, draping it in a crimson cloth and calling for the monarchy to revoke the oppressive rules of royal defamation.
(C) reuters

Thai pro-democracy demonstrators climbed a huge Bangkok statue, draping it in a crimson cloth and calling for the monarchy to revoke the oppressive rules of royal defamation.

Owing to a new outbreak of coronavirus infections in Thailand, support for the youth-led campaign calling for an overhaul of Premier Prayut Chan-o- cha’s government has stalled in recent months.

But the latest arrest of four influential figures has sparked demonstrators into action, taking hundreds back under the close watch of dozens of riot police to the Democracy Monument intersection in Bangkok’s historic quarter.

Consequently, under the lese majeste statute, which imposes fines of up to 15 years per offense if found guilty of insulting the monarchy, the leaders were indicted.

In view of this, they wanted to stress the purpose of  recent rally that is to call for 112 to be abolished which was referring to the law in its portion of the penal code. They marched to the Royal Palace as night fell, but were halted by barricades and barbed wire covering the city.

Scores of police squared off with the protesters in full riot gear, each of whom carried white shields, gas masks and helmets. The pro-democracy campaign, which began last July, is pushing for changes to the unassailable monarchy, and one of its main demands is the removal of the royal defamation law.

Thai culture has been electrified by their complaints with the throne, where open conversation about the royals is taboo. The rallies gathered tens of thousands at their height, with protesters taking influence from the pro-democracy movement in Hong Kong. Along with this, the police used tear-gas and water cannons against protestors in November, using liquid laced with an irritant. Clashes reportedly killed more than 40 people.

Morever, looking back to a day after a Bangkok court sending four of its representatives into pre-trial custody on royal defamation charges, Thai pro-democracy groups have vowed to escalate their demonstrations calling for monarchy reform and a new Constitution and through this the issue will still go on and be something to look forward with.